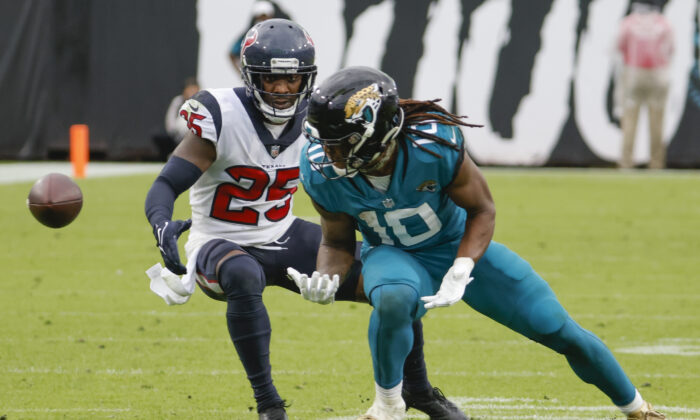 A pass slips through the hands of Jacksonville Jaguars wide receiver Laviska Shenault Jr. (10) as he is defended by Houston Texans cornerback Desmond King (25), during an NFL game in Jacksonville, Fla., on Dec. 19, 2021. (Stephen B. Morton/AP Photo)
NFL

The Jacksonville Jaguars will be without three starters Sunday against the New York Jets after the trio was placed on the COVID-19 list.

Allen is unvaccinated and will be out at least 10 days, according to current NFL protocol. He also will miss the team’s Jan. 2 game at New England.

Buffalo placed Gabriel Davis on its reserve/COVID-19 list, leaving the Bills without another key receiving threat for Sunday’s big game against the Patriots.

The Jaguars (2–12) have had few players land on the COVID-19 list this season, and Allen even addressed Wednesday how he has handled daily testing as an unvaccinated player.

“(Even) if I was vaccinated, I will always take care of myself,” he said. “I have a young family at home, so I try to not only protect myself but protect them as well. … For me, I come to work and wear my mask and made the decision for myself and my family so now I have to stick with it.

“Thankfully, didn’t have to miss a game due to that and just continue to stay safe and continue to do my job and do my part. A lot of my teammates also know so they are all aware what’s good to do and what’s not good to do so thankful for those guys.”

Davis joined slot receiver Cole Beasley on Buffalo’s list. Davis had two touchdowns and a season-high 85 yards receiving in last weekend’s 31–14 win over Carolina, filling in for Emmanuel Sanders after he was sidelined by a knee injury.

Sanders is in position to return after he practiced fully on Thursday.

Buffalo (8–6) is right behind AFC East-leading New England (9–5), but has the tiebreaking edge to clinch its second division title by winning its final three games of the season.

Ford was starting in place of Jon Feliciano, whose status is uncertain after he was placed on the list on Sunday.