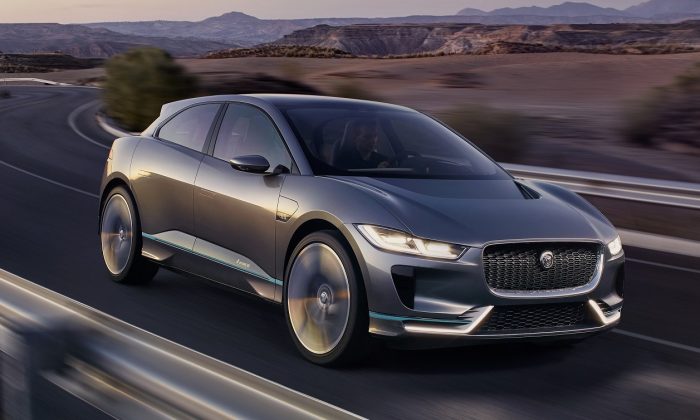 Jaguar Land Rover: A Niche Luxury Automobile Company That is on a Roll

Sitting down with executives of automotive companies at all levels to talk about new vehicles, technology, and innovation or just what’s new is nothing unusual. Having the opportunity to do that with two presidents from the same company is when you might consider purchasing a lotto ticket—it’s pretty rare.

Both men were quite affable, obviously comfortable with one another and the mutual respect was obvious. This dynamic duo has been doing great things for the brand. The discussion was fast-paced, full of humour— even evidence of self-deprecation. But through it all, they were both always on point and on message.

We had sat down with Mr. Hoffmann on one other occasion but this was our first time talking with Mr. Eberhardt who has been at the helm of Jaguar Land Rover in North America for a little over 3½ years, but he already has shaken up this often very British company (owned since 2008 by the Indian conglomerate Tata Motors). On the Jaguar side, he has cut prices, increased the standard content and offered scheduled free maintenance programs to push the brand’s sales. New facility standards and a dealer margin program have been successfully instituted for both brands.

At the end of 2016, Jaguar Land Rover North America announced that it had been awarded five 2016 ALG Residual Value Awards across both its Jaguar and Land Rover brands. ALG is the industry benchmark for residual values and depreciation data.

Epoch Times: Coming off the success of the ALG awards, how confident is JLR looking at 2017 and beyond?

Joe Eberhardt: To be clear, as an organization we generally do not like to make forecasts: they often have a way of coming back to hurt you. In 2016 we saw unprecedented growth across both brands’ lineups. In fact, the growth spurt the company has enjoyed since 2014 will likely continue in 2017—but at a slower pace—even if auto sales generally appear to have peaked. The XE and F-Pace, the two new Jaguars that were launched in 2016, propelled JLR to new record numbers in the U.S. and Canada. JLR’s big product launch comes this spring with the redesigned Land Rover Discovery. And also, we don’t have a major product launch coming in calendar 2017 for Jaguar. So it would be fair to say that this year is one of consolidation for us. And if we see small growth rates going forward, we’ll obviously be very happy, and it will be well within our business plan. Since Tata Motors took over ownership of this company in 2008 we have tripled our growth. In North America in 2016 we managed to move 117,000 units. For a niche, premium luxury brand, those are excellent results.

So, going forward, based upon the economy and, of course, possible new trade policies, let me have Wolfgang provide you with Canada’s commitment to JLRs bottom line for 2017 (laughs).

Wolfgang Hoffmann: Wait, I think a bus just drove by… (laughs). I’m going to continue with the company line (smiles broadly)… I will say, however that we are definitively looking optimistic for 2017. We anticipate continued strength of crossover and SUV sales to grow—with the new Discovery coming on-line and the all-aluminum unibody platform of the Range Rover Velar hopefully later this year—plus our dealer network is still very enthusiastic about the innovative F-Pace crossover. By the way, did you know that Canada was the number five market for our F-Type globally!

Epoch Times: As a true global company and a new plant almost finished in Slovakia, are there any firm plans for specific models coming off that line?

Mr. Eberhardt: It’ll likely be pretty fluid. We’ve done that with our traditional, long-established Land Rover production facility in Solihull, England which currently produces Jags. We tend to change things up every two to three years. In all likelihood, Slovakia will follow suit vis-à-vis flexibility. We need a new plant to keep up with production and Eastern Europe, specifically Slovakia, made a great deal of sense from an economic and supply chain standpoint by way of the location of a plant which can be refitted efficiently and effectively to assist us in our overall endeavours globally.

Epoch Times: Up until a few months ago, it appeared to most that JLR was not involved with electric vehicles—EVs. Late last year an all-new product was presented as both a concept and production model simultaneously—the I-Pace. With the introduction of this seemingly out-of-the-blue model and its imminent delivery, how might this impact JLRs future going forward?

Mr. Eberhardt: Yes, it’s true, we succeeded to really fly below the radar with the announcement about the Jaguar I-Pace and somehow managed to take consumers by surprise! Naturally, this was not an overnight development. It’s been worked on by hundreds of people for several years. Everything about this vehicle is new and very exciting! Yes, we may seem a little late to the party, but historically this is really nothing new for JLR. We imagine a great deal of smiles and nodding of heads when the initial announcement was made!

The consensus by many manufacturers (not all) is that it’s been thought to be important to show people that you’re driving an electric car. At JLR, we don’t subscribe to that notion. An EV need not be small and quirky looking. What I think we’re trying to prove here is that you can have a great-looking SUV that just happens to be all-electric.

Epoch Times: Arriving in the second half of 2018, the I-PACE Concept would appear to represent the ultimate electric performance SUV. In fact, we have read that the I-Pace has some impressive statistics with a claimed 4.0 second 0-100 km/h time.

Mr. Hoffmann: Yes, that is correct! Motivation comes from a pair of permanent-magnet AC motors; one is integrated in each axle. Each produces 200 horsepower and 258 lb.-ft. of torque, for totals of 400 horsepower and 516 lb.-ft.! In fact, the I-Pace reflects the emphasis on size and style in an all-electric model. It will have a 90-kilowatt-hour battery which is designed to give the vehicle an anticipated range of over 350 kilometres on a single charge!

Mr. Eberhardt: Also, it’s important to remember that the I-Pace is a crossover—not an SUV. Like I said earlier, we may, by some accounts, be late to the party, but remember, even with AWD, we did not invent it—but JLR “innovated” the heck out of it! Same thing with many of the advanced designs on board. We have many proprietary systems under the skin of this vehicle. While we may be late, like a well-mannered guest at a dinner party, we try to bring the best bottle or hostess gift that will be remembered by all because of its individuality and practicality. As a premium luxury brand, second only to Tesla with the introduction of a full battery vehicle—even before any of the expected German and even Asian OEMs—as far as range, etc. are concerned, customers in the market for this type of product will likely embrace this automobile.

What Other Powertrains Loom Large for JLR?

Epoch Times: Now, as far as EVs in the long-term future of JLR, will it be all EV all the time?

Mr. Hoffmann: While we believe that EVs are, will be important, there may be other solutions forthcoming. In short, internal combustion engines continue to innovate and develop. Similarly with diesel.

Mr. Eberhardt: We, all OEMs need solutions to satisfy many. EV powertrains will move forward. In fact, as a company, 50 percent of all JLR models will embrace some kind of electrification by 2020. Full BEV, PHEV, hybrid—there are, as you know many options. To be clear, JLR will explore those avenues that make sense to fulfil the wants and needs of existing and new customers. We cannot afford to be complacent.

Epoch Times: Will we see more diesel engines in North America before too long—in spite of what happened with Volkswagen?

Mr. Hoffmann: Diesel will continue to be an important factor for JLR. I believe that diesel still has its place, in the Range Rover Sport, for example, 40–45 percent of our sales in Canada are with the diesel option. Our customers buy horsepower but they prefer to drive torque! It’s all about the dynamics of driving. It’s also about economics, too. Driving 1,000 kilometres between filling stations… As far as diesels are concerned, the one aspect I struggle with, personally, are the imposing conditions placed upon us as an industry. Wouldn’t things be so much easier for everyone if governing bodies stated what they want from diesel and then leave it to the engineers to arrive at solutions? We all want clean solutions, clean emissions.

Epoch Times: Finally, will Brexit have an impact on the North American market?

Mr. Eberhardt: It’s now a question of when. Article 50 will be signed in March 2017 and then there are up to two years and out… With all long-standing relationships, especially between the U.K. and North America and Europe, an equitable trade deal is important and we all need to see that continue. With our economy being global, the implications with Brexit will have an impact in some way.

Mr. Hoffmann: Yes, I imagine that lawyers in the U.K. will do very well on this overall process…