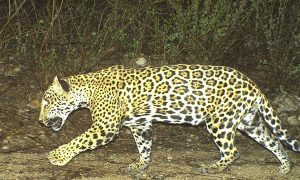 Catching a jaguar on a remote camera trap in the Amazon is a rare, happy sight. But catching a jaguar attempting to ambush a herd of peccaries is quite simply astonishing.

“A research assistant, who was coding the videos sent me an email to have a look,” said primatologist, Mark Bowler, a postdoctoral fellow at the Institute for Conservation Research at San Diego Zoo Global. “I saw the herd of peccaries run, and agreed that it was nice, but as they left the frame was thinking it couldn’t possibly have the predator in it. It was one of those jaw-on-the-floor moments!”

“We are looking at the recovery of animal populations after the local indigenous people, known as the Maijuna kicked out all loggers and thus stopped chronic overhunting,” Bowler told mongabay.com.

Describing the recovery as “remarkable,” Bowler says he suspects that the return of vast herds of white-lipped peccaries (Tayassu pecari) has allowed big cats, like jaguars (Panthera onca), to also stage a comeback in the region.

White-lipped peccaries are known in the Amazon as ecosystem engineers, especially as they often travel in herds of several hundred, tearing up the ground looking for nuts and fruits.

Around 400 Maijuna people live in four village in the region, along the Napo and Putumayo Rivers. In 2012, they established the 391,000 hectare Maijuna-Kichwa Regional Conservation Area to safeguard their forests and the biodiversity within.

“The Maijuna are conscious of what can happen when there is overhunting, they had not seen peccary herds in their lands for a decade when they stopped the loggers,” noted Bowler. “They are keen to manage hunting, principally by keeping outsiders from hunting in their territories, to make sure the herds remain in the area. If they can achieve this, it can only be good for jaguars too.”

But this nascent protected area—and the Maijuna people themselves—are now threatened by government plans to build a road through their territory, according to Bowler. The indigenous people fear that the road could bring a new wave of colonizers into the forest, devastating white-lipped peccary and jaguar populations once again.