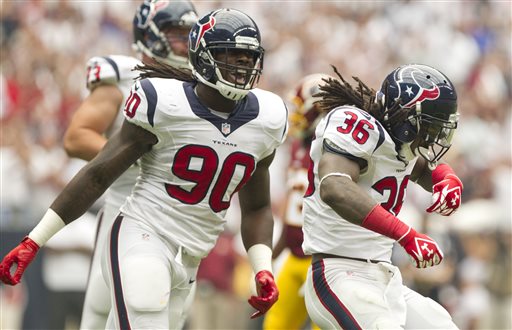 Houston Texans linebacker Jadeveon Clowney left the game on Sunday against the Washington Redskins with an apparent injury.

Multiple reporters noted that the linebacker was limping as he walked to the locker room.

Clowney was coming off an injury, after suffering a concussion during a joint practice session with the Denver Broncos two weeks ago.

Clowney was still out as the second half began, with Ganguli saying that he isn’t on the sidelines, and the Texans soon announced that Clowney was out with a knee injury.

Houston Texans’ Jadeveon Clowney (90) leaves with a knee injury during the second quarter of an NFL football game against the Washington Redskins, Sunday, Sept. 7, 2014, in Houston. (AP Photo/Patric Schneider)

“They think it’s a good prognosis, so it looks like it’s going to be OK,” O’Brien said. “He may miss some time, he may not. Who knows? So we’ll know better as the week goes on.”

It wasn’t clear how Clowney was injured, but it happened late in the second quarter. He looked to be arguing with the team doctor as the pair walked off the field to the locker room a couple of minutes before halftime.

Clowney has struggled to stay on the field since joining the Texans. He left a dual practice Aug. 20 after a helmet-to-helmet hit with Denver Broncos tight end Jacob Tamme. He missed the Texans’ final two preseason games, but said he passed the NFL protocols for head injuries in just over a week. He had to sit out the beginning of camp, too, after offseason surgery to repair a sports hernia.