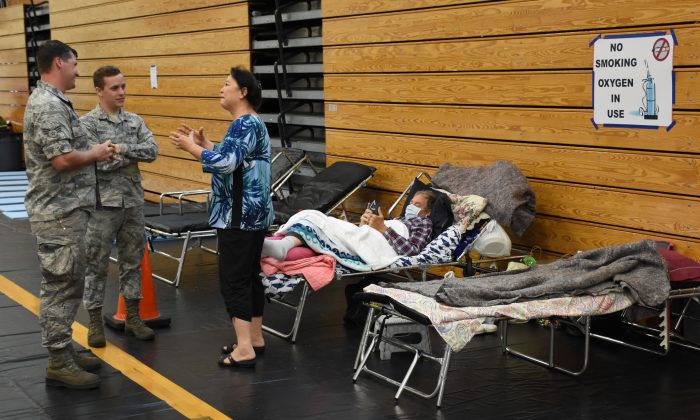 Florida Air National Guardsmen from the 125th Fighter Wing assist citizens with special needs in a special needs shelter opened at the Atlantic Coast High School in Jacksonville, Florida Sept. 9, 2017. The shelter is one of 11 opened in Duval County to protect citizens from Hurricane Irma. (Air National Guard photo by Master Sgt. William Buchanan/Released II CC BY 2.0 )
US

The mayor of Jacksonville, Florida, is warning residents in low-lying areas and those who are near the St. Johns River that they are most in danger of “serious storm surge” as Hurricane Irma is downgraded to a tropical storm.

On Monday, Sept. 11, Jacksonville Mayor Lenny Curry told residents who need rescuing to call 904-630-CITY and to put something white outside their homes so that they are easily visible to rescuers. For those who have some other emergency, he said to call 911.

A spokesman for the Jacksonville Sheriff’s Office said they are getting about one call per minute and have deployed over 1,600 officers to rescue people.

Some 264,000 residents have been ordered to evacuate and 13 shelters have been set up for those who can’t find shelter elsewhere.

Curry said he spoke to Florida Gov. Rick Scott this morning and that the governor promised to send state resources to the area as the city gets hit with record flooding.

Angie Enyedi, an incident meteorologist with the National Weather Service says that recent flooding has broken the previous flood record set in 1864, and the water is continuing to rise. She said high tide is expected a little before 2:00 p.m. and that, in addition to the rise from the tide, residents should expect another four to six feet of water.

A flash flood warning was sent out this morning, she said, “to highlight this hazard,” especially for residents along the riverfront.

As of 8 a.m., the National Hurricane Center said Irma is centered over Florida, about 60 miles north of Tampa and about 35 miles east-southeast of Cedar Key. The tropical storm is going north-north east at 18 mph and is expected to continue on that trajectory through Tuesday.

The National Hurricane Center also said the storm was expected to reach Georgia by the afternoon and into eastern Alabama by nightfall or early Tuesday.