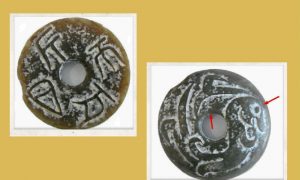 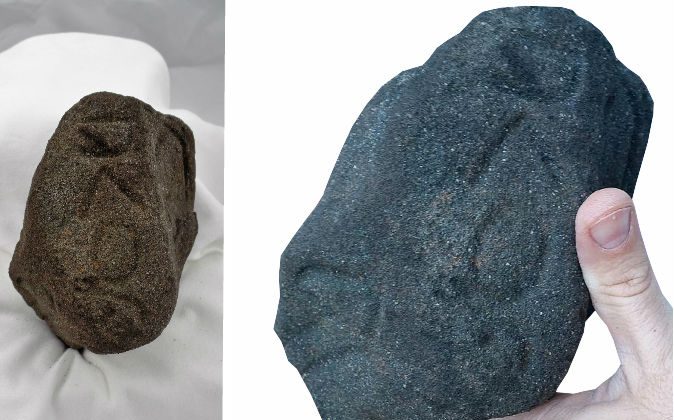 History is slow to share its secrets, but did recently for a rural Jackson County man while clearing an area of his property. As a longtime resident and avid artifact collector, Tommy Rainey quickly realized he had found another unique piece to add to his collection of atypical North Georgia artifacts.

Jackson County and the surrounding area is rich with archaeological sites located along ancient pathways and waterways flowing to the Chattahoochee River, which traverses the length of the State on it’s way to the Gulf of Mexico.

One nearby unique site that illustrates the ancient history of the area is a rare structure composed of four earthen concentric circles, the largest being nearly 100 yards in diameter.

Rainey found a basalt artifact, 7-inches long and weighing only 23 ounces. The basalt is a soft volcanic rock that is easily shaped.

It has seven facets, each presenting a different appearance depending on how it is viewed. Is it a bird, the profile of a face, something else, or all of these?

Adding to the visual complexity are the incised geometric shapes and possible symbols on each surface. This leads to the questions, from which orientation should they be viewed and what do they represent?

The brain is remarkable in it’s relentless effort to interpret what something is by sorting through vast amounts of accumulated information to resolve the problem. Its decision, however, is based only on information it has stored.

While this is a simplistic explanation of a more complex psychological phenomenon known as Pereidolia—recognizing patterns, shapes, and familiar objects in a vague stimulus. It helps explain why different people see different things.

Mysterious, Giant Face Found on Cliff in Canada—Man-Made or Natural?

To illustrate, if ten people were asked what the curved feature on the rock’s lower-left represented, you could get ten different answers. If the participants visualized the profile of a human head, answers like mustache, mouth, or part of a nose could be expected; but if they were not aware that a volute fang shape is a diagnostic of a Mesoamerican deity, it would not be one of their answers.

While it is a plausible interpretation, the fang interpretation by itself is not conclusive. Yet when combined with the elongated forehead and spiral earring, the rock decidedly takes on a Mesoamerican appearance.

This is a view also shared by two Mesoamerican scholars after reviewing photographs of the rock. The scholars did not wish to be named until conducting further analysis.

Other telling indicators are revealed when compared to a Mayan artifact which recently made headlines. It, along with seven others, some of which were fashioned from basalt, were recently returned to Guatemala after being illegally imported to the United States.

Both examples show incised features that may represent the “V” and oval symbols which are found in North America symbolism and which are routinely interpreted as a “serpent swallowing an egg.”

Perhaps the most compelling evidence linking the ancient peoples of Jackson County to Mexico cultural groups comes from Charles de Rochefort, a European who wrote of his experiences while touring the American Southeast in the 17th century.

Referring to his conversations with the area’s Indigenous people, he writes:”These Apalachites boast that they had propagated certain colonies a great way into Mexico. And they show to this day a great road by land, by which they affirm that their forces march’d into those parts.”

“The Inhabitants of the country, upon their arrival, gave them the name of Tlatuici, which signifies mountaineers or highlanders.” Rochefort also writes: “This people [Apalachites] have a communication with the Sea of the Great Gulf of Mexico or New Spain, by means of a river … the Spaniards have called this River Riu del Spirito Santo [Mississippi River].”

The road Rochefort mentions may be what is referred to today in Georgia history as the “The Great White Path.” This ancient road, constructed of crushed sea shells, sand, and clay, is believed to have generally followed the same course as today’s  Highway 129 through Jackson County on its westward course from the Atlantic coast.

Rochefort writes of other events of the Apalachite oral history which should be of interest to Georgia history buffs. Interestingly, one tells of people coming to their lands from the North, traversing their way along narrow mountain paths using animals that match the description of camels—yes camels.

The Jackson County artifact illustrates there are few clear answers when it comes to deciphering history, just more questions.

More interesting North Georgia artifacts can be seen at www.precontact.org

Visit Epoch Times Beyond Science page on Facebook and subscribe to the Beyond Science newsletter to continue exploring ancient mysteries and the new frontiers of science!