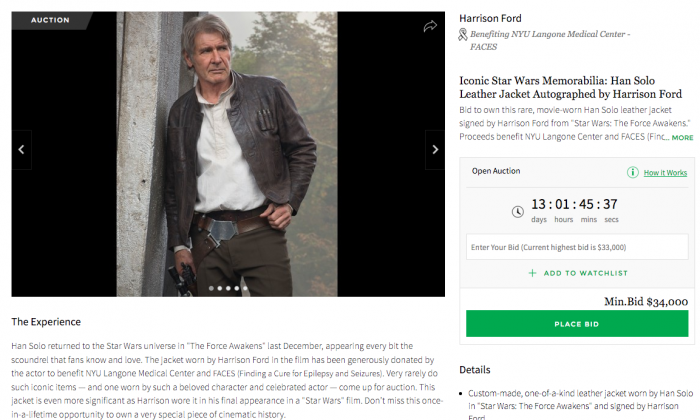 Leather jacket worn by Harrison Ford is up for auction. (screenshot/ifonly)
Entertainment

Jacket Worn by Harrison Ford in ‘Star Wars: The Force Awakens’ up for Auction

Harrison Ford is not only a hero in the blockbuster, “Star Wars: The Force Awakens,” he is also a hero in real life.

The leather jacket worn by Ford in the record breaking film is up for auction and bidders who are interested in the leather piece will be glad to know that the money is going to a good cause.

According to If Only, the leather jacket is a custom piece that was specifically made for the film and is signed by the 73-year-old actor. The listing will run until April 11 and currently the highest bid is at $34,000.

Proceeds will go to the Medical Center and the charity, FACES (Finding a Cure for Epilepsy and Seizures).

The proceeds will benefit a cause that is personal to the Golden Globe winner. Ford’s daughter, Georgia received treatment for epilepsy at New York University Langone Medical Center. Therefore, proceeds will go to the Medical Center and the charity, FACES (Finding a Cure for Epilepsy and Seizures).

5 Fun Star Wars Games for Android You Need to Play

“Nine years ago my daughter was admitted to NYU Langone to be treated for epilepsy, and she has not had a seizure since the day she left,” Mr. Ford said to the more than 830 attendees. “My family and I are grateful for Dr. Devinsky’s help and all the support that FACES provides for those who suffer from epilepsy and seizures.”