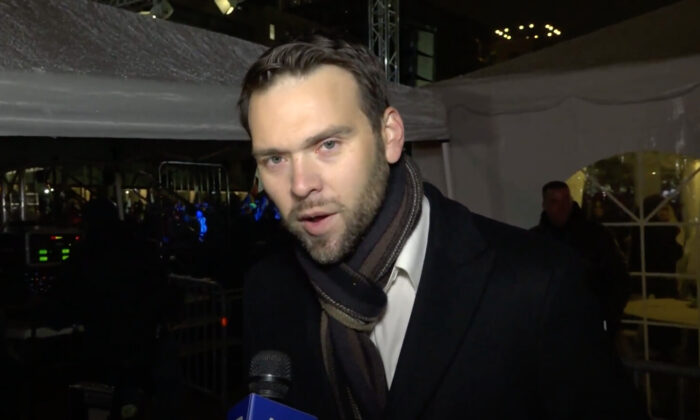 Jack Posobiec speaks to an NTD reporter in Washington on Jan. 5, 2020. (Screenshot/NTD)
Europe

Conservative American author and podcast host Jack Posobiec said he was briefly detained by police at the World Economic Forum (WEF) in Davos while reporting on assignment for Turning Point USA to “expose the ‘Great Reset’ agenda.”

Videos emerged on social media showing Posobiec at an outdoor table on the sidewalk surrounded by around four armed and uniformed police officers and at least two plain-clothed officers in the Swiss city. The officers wore patches that identified them as “WEF Police.”

Posobiec described the encounter in a video released by Turning Point USA.

He went on to explain that around an hour prior to being detained a plain-clothed police officer approached his crew asking to see their media credentials. Posobiec said the officer appeared to be satisfied and they continued reporting.

However, later, while taking a break to recharge their batteries and eat, he said “two minivans full of officers,” which he described as a “quick reaction force,” suddenly pulled up.

“Everybody storms out. They’ve got MP5s. One of the guys is flagging me with his MP5 … and then each of us was taken, myself and the entire crew, one by one … behind the building and behind this stack of tables. And we were made to empty our pockets, and we were frisked,” he said. The MP5 is a type of submachine gun.

In a statement to The Epoch Times, a Swiss Federal Police media spokesperson said no one had yet been arrested by police in Davos, including any journalists.

But they noted that Posobiec was stopped by police as part of normal checks on people and vehicles carried out before and during the annual WEF meeting.

The spokesperson also clarified the “WEF Police” patches worn by police, saying it “serves the team spirit for the operation around the Annual Meeting.”

“The WEF organization does not have a police force,” the Swiss police spokesperson said.

“The security forces deployed are identified by official uniforms, identity cards, as well as police patches. This was also the case when the journalist was checked. The WEF police badge is an additional badge created by the security forces themselves, which is redesigned every year.”

In a video posted to Twitter by user Anon News, a female plain-clothed officer tells the woman behind the camera to “please stop filming” after she asks why Posobiec is being detained.

The operator then points the camera away from the officer toward Posobeic but keeps recording, and asks again why he is detained.

“What’s ‘detained’? Can you explain that?” the plain-clothed officer says.

“How come he’s being surrounded right now? Is he allowed to leave the area?”

“Is there a reason he specifically was targeted?”

“There is a reason because we have to have a reason to control a person,” the officer says.

“So what was the reason? What was he doing?”

“I don’t have to tell you that … Why are you asking me that?” the officer says.

The camera operator then explains that she’s asking because she wants to know why Posobiec, who is there as a journalist, was targeted by the police while other reporters were not.

“There is a reason. But, ah, everything is clear now and, um, we’re about to leave in just a few seconds. Okay? Could you please now … Can I ask you please to delete your …” the officer says, at which point the video cuts off.

BREAKING: US Journalist @JackPosobiec has been detained by Swiss police.

They refused to tell me the reason he and his team have been detained.

He shares that police pointed guns at him and stopped him because he “looked suspicious”. pic.twitter.com/sv6XLlT0EC

Posobiec is in Davos during the WEF to, in his own words, expose WEF chair “Klaus Schwab and his cronies” and their “eight key goals for stripping democracy: no freedom of speech, no private property, no national borders—and so much more including no real food!”

In a post on the Turning Point USA website, Posobiec writes that he was sent to Davos “to expose the global elites’ annual plans for the complete takeover of our democracy and their goals for the destruction of the Western World by breaking on-the-ground coverage of the World Economic Forum and The Great Reset.”

In an op-ed for The Epoch Times, former NYU professor, Michael Rectenwald, explained the Great Reset in detail.

Rectenwald cited the words of the co-founder and main author of the WEF’s Monthly Barometer publication, who said the Great Reset was a way to address the “weaknesses of capitalism” that were purportedly exposed by the COVID pandemic.

The general concept of the “Great Reset” revolves around the idea of transforming traditional capitalist economies via paradigm-shifting events, such as a pandemic.

The Great Reset agenda, as promoted by the WEF, has been decried by conservative media and politicians around the world as a far-left ploy to increase socialist policies worldwide.

This report was updated to include the statement by Swiss authorities.