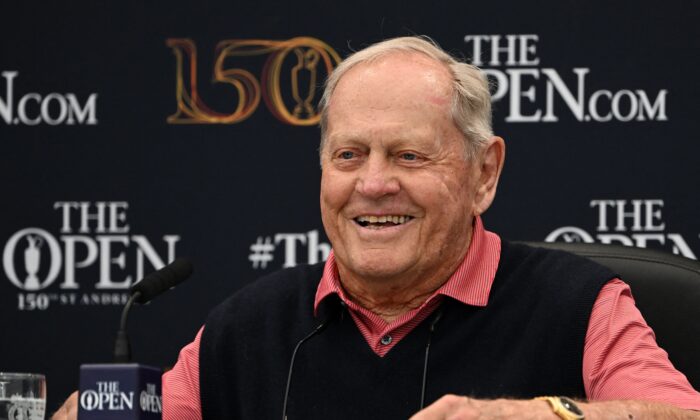 Winner of The Open in 1966, 1970 and 1978, former golfer Jack Nicklaus smiles during a press conference ahead of The 150th British Open Golf Championship on The Old Course at St Andrews in Scotland on July 11, 2022. (Paul Ellis/AFP via Getty Images)
Golf

A three-time Open champion, Nicklaus received the honor on Tuesday. He won the title twice at the Old Course at St. Andrews—site of the 150th tournament that begins Thursday.

He hadn’t been back since 2005, when he last played there in a memorable event. And when Nicklaus accepted the honorary citizenship, he joined a very small group of Americans.

“I didn’t want to come back and dilute that for what it was. It was fantastic then,” Nicklaus told reporters Monday.

“But when I got the invitation this time to be an honorary citizen of St. Andrews and to follow Bobby Jones and Benjamin Franklin, I’ve got to come back. So to be back is fantastic.”

“When I stepped on it in ’64, all of a sudden to step out of the clubhouse, step here, look at the first tee, look at what was there, see the town, see everything, I fell in love with it immediately,” Nicklaus said of St. Andrews. “And I’ve had a love affair with it ever since.”