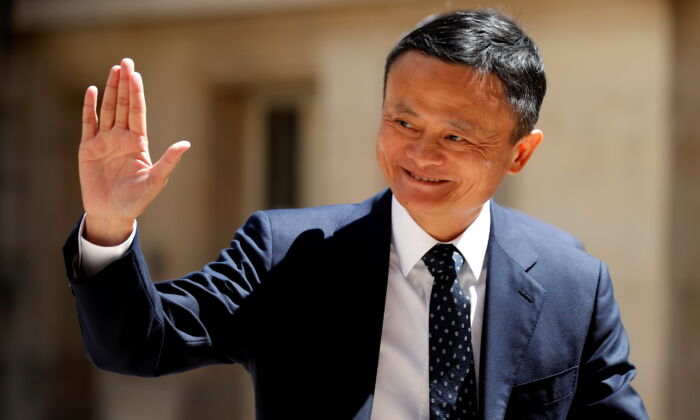 Jack Ma, founder of Alibaba Group, arrives at the "Tech for Good" Summit in Paris, France, on May 15, 2019. (Charles Platiau/Reuters)
China Business & Economy

The reported reappearance of Jack Ma overseas, for the first time in over a year, has resulted in shares of the tech giant Alibaba Group surging in Hong Kong.

Ma is the founder and former chairman of Alibaba Group Holding, which owns the South China Morning Post (SCMP) which reported on Oct. 19 that he was on an agriculture study tour in Europe.

Frenzied rumors have swirled over the whereabouts of the once China’s richest man over the past year.

The sighting has fed speculation that Beijing has relaxed its almost year-long scrutiny over the e-commerce giant, resulting in Alibaba’s Hong Kong-listed shares jumping nearly 10 percent on Oct. 20, extending gains for the fourth consecutive session. By the end of the day, Tencent went up 2.1 percent, Meituan gained 2.9 percent, and Alibaba added 6.7 percent.

On Oct. 20, the Hang Seng Tech Index jumped 2.7 percent, having bounced nearly 14 percent from a record closing low hit on Oct. 6. The indicator is to reflect the performance of the Hong Kong stock market related to the internet and information technology.

A day after the SCMP report, two Spanish newspapers said that Ma was on the Spanish island of Mallorca, where his luxury yacht is anchored.

The Diario de Mallorca newspaper said Ma was seen on Oct. 19 in the port of Andratx buying home decor at a local store, after the superyacht had been seen moving along Mallorca’s northwestern coast for several days.

These reported sightings are only a few of the public appearances made by Ma amid a regulatory clampdown by Beijing on his sprawling business empire, starting late 2020.

The billionaire disappeared from the public view for three months after he blasted China’s regulatory system for having “too many prohibitions and limitations with too few policies” in a speech made at a Shanghai forum on Oct. 24, 2020.

Ma’s empire promptly then came under heavy scrutiny from regulators, which even led to the suspension of Ant Group’s $37 billion blockbuster IPO, besides a record $2.8 billion antitrust penalty in April.

Ma firstly reemerged before the public with a 50-second video appearance on Jan. 20, speaking to a group of teachers, and easing some concern about his unusual absence.

Chinese authorities have tightened control over the country’s fast-developing industries including internet giants.