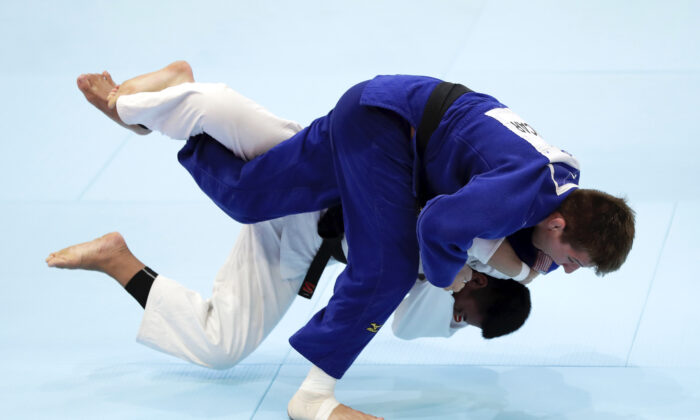 Jack Hatton (blue) of the United States and Marco Tumampad (white) of the Philippines compete in the Men's -81kg Pool C first round on day four of the World Judo Championships at the Nippon Budokan in Tokyo, Japan on Aug. 28, 2019. (Kiyoshi Ota/Getty Images)
Sports News

Jack Hatton, a rising star in judo and USA Judo national team member who had hoped to qualify for the Tokyo Olympics in 2020, has died at 24.

Hatton, from Massachusetts, was one of the USA Judo team’s top players and had won multiple medals in various competitions around the world in the practice of judo—a form of martial arts.

The judoka had described himself has an “Olympic contender for Tokyo 2020″ as well as “one of five athletes officially receiving stipend from USA Judo National Team and U.S. Olympic Committee” on his LinkedIn page.

The cause of Hatton’s death has not been released.

USA Judo announced his death as an “unexpected passing.”

“Jack was one of America’s top judo players and was a multi-time medalist for USA Judo in various competitions across the globe,” USA Judo said on its website and Facebook page on Sept. 25. “Jack made an indelible mark on all who had the pleasure of knowing him, and he will not be forgotten.”

The organization added that grief counseling services for those affected by Hatton’s death will be provided.

Tony Sangimino, a double U.S. judo champion and former teammate of Hatton, started a fundraiser on GoFundMe to help Hatton’s family. The fundraiser raised more than $19,000 as of late Sept. 26.

Hatton had trained at Pedro’s Judo Center in Wakefield, Massachusetts since 2015. In a tribute to the judoka, the center said that he will be deeply missed.

“Along with being a top US Judo athlete, Jack was kind-hearted, caring and an all-around great person. He was a true role model for students at our dojo and judoka all over the country,” Pedro’s Judo Center said on Facebook Sept. 25. “He will be deeply missed by all of us at Pedro’s and the rest of the judo world.”

“I’m deeply moved by the sudden death of USA Judo international Jack Hatton. On behalf of the IJF, I send my sincere condolences and wishes to USA Judo and Jack’s family and friends,” he wrote.

I’m deeply moved by the sudden death of @USAJudo international Jack Hatton. On behalf of @Judo I send my sincere condolences and wishes to USA Judo and Jack’s family and friends.

“I am so sad to hear,” the Israeli judoka told Judo Inside. “Jack is one of the best USA Judoka and top athlete at the U81kg division. I’m so sad to hear this and I hope he is in a better place. I had a tough fight with him. My heart is broken.”

Hatton told the U.S. Olympic & Paralympic Committee in 2018 that he started practicing judo at the age of four and that the practice has played a major role in his life.

“Judo has impacted me since I started it at the age of 4 and has taught me a lot of life’s lessons,” he told Team USA. “It has impacted positively and negatively, but has always been my greatest teacher.”