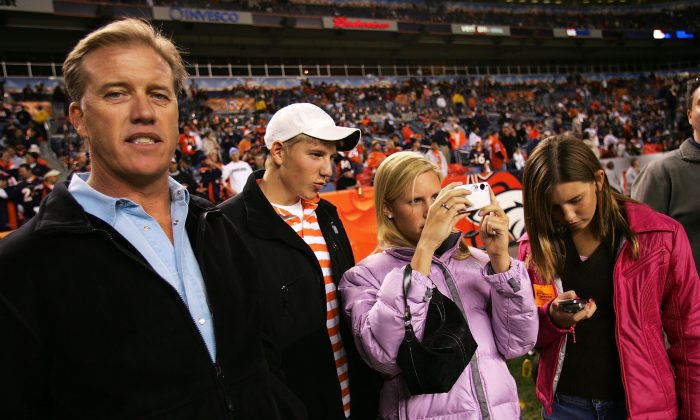 Jack Elway, second from left, and his father John Elway, left, with other family members in a 2006 file photo. (Doug Pensinger/Getty Images)
US

Jack Elway, the son of Denver Broncos executive John Elway, has been arrested on charges of assault and disturbing the peace.

According to jail records, 24-year-old John Albert Elway was booked into jail early Saturday morning for an incident that occurred near a college campus in downtown Denver. Police spokeswoman Raquel Lopez says she can’t provide any details about what led to the arrest, other than the alleged victim was a female.

But CBS reported that the charges are a case of domestic assault that come after Jack pushed a 23-year-old woman out of a moving car near the intersection of Colfax Avenue and Lipan Street.

A source said that the woman had no visible injuries but the extent of her injuries is unknown.

Broncos spokesman Patrick Smyth says “this is a personal family matter and the Broncos will not have any additional comment on it.”

Elway has been released on $550 bond and is scheduled to appear in court Thursday. Jail records do not indicate if he has an attorney.

Elway previously played football at Arizona State but ultimately quit the team, a decision his father supported at the time.

“He sounds better. Just talking to him, it’s like the world has been lifted off his shoulders,” John said in 2009. “So I’m happy for him.”