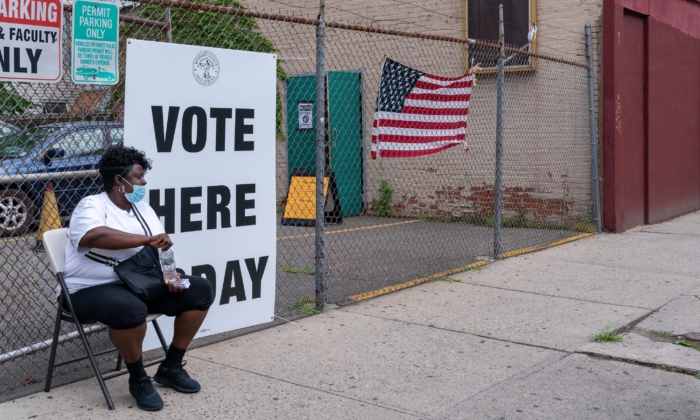 A poll worker sits outside of the polling station in Saint Aloysius in Jersey City, N.J., on July 7, 2020. (David Dee Delgado/Getty Images)
2022 Election

Ciattarelli, 59, served in the state legislature from 2011 to 2018. He was defeated in the 2017 GOP gubernatorial primary to then-Lt. Gov. Kim Guadagno, who went on to lose to Murphy in the general election.

On the campaign trail, Ciattarelli called Murphy an “extremist on the abortion issue,” and called on the state’s legislature to rein in the governor’s executive powers.

“Make no mistake, Phil Murphy has no problem hijacking our democracy and wielding the power of a king while making unilateral decisions without any regard to whom he is impacting,” Ciattarelli said in a statement. “It is the job of the legislature on both sides of the aisle to end the insanity in Trenton.”

Murphy’s campaign has criticized Ciattarelli as a longtime political insider and a “cheerleader” for former Gov. Chris Christie, a Republican.

“While the Assemblyman is hoping to rebrand himself as an outsider, he’s nothing more than an establishment politician who enabled the disastrous Christie agenda and has spent his entire career putting special interests ahead of New Jersey values—with a long career like that, no wonder he wants to hide it,” Murphy’s campaign spokesman, Jerrel Harvey, said in a statement last month.

Ciattarelli raised more than $6.8 million for his campaign, 10 times more than the next GOP candidate in terms of fundraising. He received the endorsements of former Gov. Donald DiFrancesco, a Republican, and all 21 of New Jersey’s county Republican organizations.