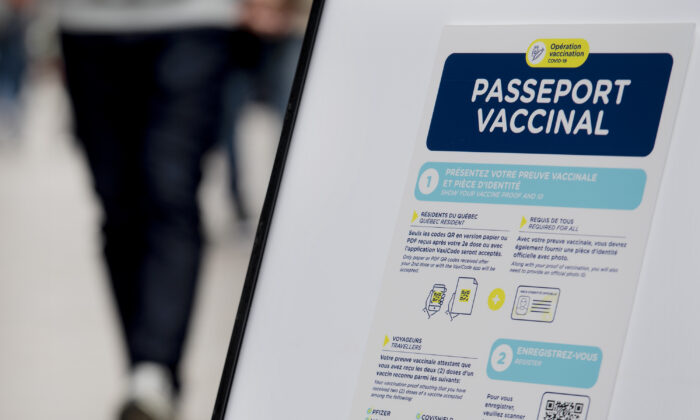 A sign at a restaurant advises customers of Quebec’s COVID-19 vaccine passport, in Montreal on Sept. 6, 2021. (The Canadian Press/Graham Hughes)
Canada

As more employers require COVID-19 vaccination as a condition of employment, new websites have emerged to help the unvaccinated find jobs.

In August, the federal government announced mandatory vaccination for employees working in federally regulated sectors and public venues. Since then, hospitals, banks, police services, and some provincial administrations have introduced similar policies for current staff and future hires.

The mandate has meant that thousands of Canadians who refused vaccination have lost their jobs or been placed on leave. Now, some are turning to social media platforms such as Telegram, where channels have been created to help connect those who are unvaccinated with non-discriminatory employers.

George Douklias, creator of Jabless Jobs, told Global News that he first set up a job board on Telegram to find himself a new job after his employer started “introducing vaccine restrictions,” which he disagreed with.

Douklias said he registered Jabless Jobs as a company after it “blew up” when more people joined. Despite its name, Douklias said the jobs offered are not limited to the unvaccinated.

“Jabless Jobs is an employment service with a mission to connect non discriminatory employers with like minded job seekers. We aim to give people hope by empowering everyone to find financial security regardless of their personal choices,” the company’s website says.

Jabless Jobs was registered in Vancouver on Oct. 14, according to the online database of companies filed with Corporations Canada. Its website says it got close to 132,000 views between Nov. 25 and Dec. 12.

As of Dec. 13, the company’s job board had posted more than 80 listings, with a variety of offers in construction, trades, health care, and early childhood education.

More informal social media channels, such as one on Telegram called “B.C. mask/vax free employment,” act as message boards where workers in a specific region can post information on their skillset and are connected with employers in that province. The B.C. group has around 3,400 subscribers, with similar groups in Alberta and Ontario with thousands of subscribers.

The vaccination mandate is not imposed on employees in the private sector, as public health authorities have left business owners to decide that for themselves. Many private companies have nonetheless developed their own corporate vaccine mandates for employees, leading to more unvaccinated people potentially looking for work.

Job vacancies have doubled so far this year, according to official data, as Canada grapples with labour market shortages across several sectors.

Across Canada, 86 percent of adults are fully inoculated, though that drops under 80 percent among 18-40 year olds.

Despite public health officials’ repeated claims that the COVID-19 vaccines are not harmful to people’s health, many cases of “adverse events” occurring after the shot was administered have been recorded and published weekly by Health Canada.

Of the main vaccines approved for use in Canada, trials of the Pfizer vaccine showed 95 percent efficacy in preventing symptomatic COVID-19 infection after two doses, while the Moderna vaccine was 94.1 percent effective, and AstraZeneca had an average efficacy rate of 70 percent.