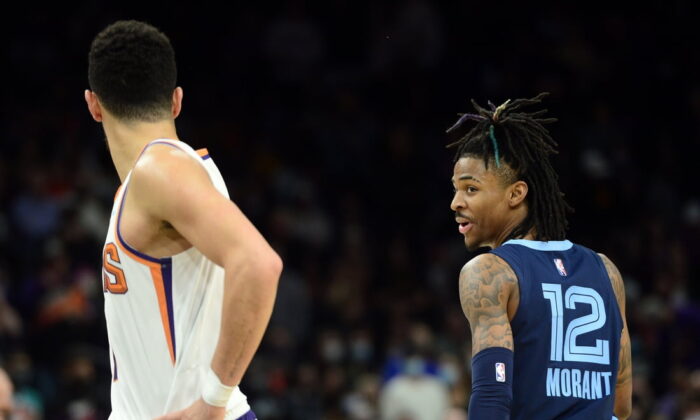 Ja Morant scored 33 points, including a layup with .5 seconds remaining, and Desmond Bane scored a career-high 32 points as the visiting Memphis Grizzlies withstood a fourth-quarter rally by the Phoenix Suns for a 114–113 win on Monday night.

Steven Adams had 13 points and 16 rebounds, and Jaren Jackson Jr. added 11 points for the Grizzlies, who led by as many as 18 late in the third quarter before holding on for their second straight win.

Devin Booker scored 30 points and hit a 3-pointer to put the Suns ahead 113–112 with 5.1 seconds left. After Morant scored on a driving layup, Mikal Bridges missed a baseline jumper at the buzzer.

The Suns were without starters Deandre Ayton and Jae Crowder, who are both in the league’s health and safety protocols.

Phoenix trailed 89–75 at the start of the fourth quarter before opening the final period on an 18–7 run.

Bane scored with 54 seconds left to put the Grizzlies ahead by five before Bridges scored with 32 seconds to play to pull the Suns within 112–110.

Memphis jumped to a 17–6 lead before Phoenix rallied to cut the deficit to 25–24 going into the second quarter.

Bane scored 19 points in the first half for Memphis, which took a 60–48 lead into the break after closing the period on a 19–8 run.

The Grizzlies shot 52.2 percent from the field in the first half and held Phoenix to 38.6 percent, including 3-of-14 on 3-pointers.
Morant scored 15 points in the third quarter for Memphis, which extended its lead to 18 with 1:44 left in the period.

The Grizzlies played without De’Anthony Melton and Dillon Brooks, who are both in the league’s protocols.

The Suns were without coach Monty Williams, who entered the protocols prior to the game. Assistant Kevin Young filled in.

Phoenix won 119–94 in the first meeting between the teams in Memphis on Nov. 12.