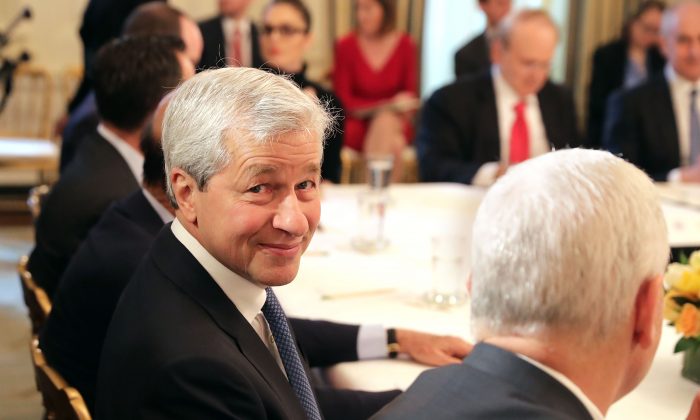 Jamie Dimon, chief executive of J.P. Morgan Chase, praised President Donald Trump for reversing a trend of uncompetitive taxes and excessive regulation, which he blamed for the languid recovery from the 2008 financial crisis.

“Presidents get a lot of credit, a lot of blame for things they didn’t do, but the President has done things which accelerated growth,” Dimon told CNBC’s Wilfred Frost on July 30.

He pointed to the wimpy GDP growth during a decade that, in his view, should have been a spry recovery.

Economic policy went off track long before the crisis, according to Dimon.

Trump’s tax cuts, among other things, slashed the federal corporate tax rate from 35 percent to 21 percent and ended double taxation of foreign profits. It also opens the door for companies to bring back the $3 trillion they had stashed overseas, for a one-time 15.5 percent tax.

Major companies have so far brought back or announced to bring back about $390 billion, according to data collected by SDxCentral. Apple alone indicated repatriation of some $245 billion.

“It takes 12 years to get permits to build a bridge that’s already there and failing. It took eight years to put a man on the moon,” he said. “So the American public looks at this stuff and says, ‘that’s what’s holding us back, it was us.’”

Trump said the approval process for infrastructure projects has been cut to two years under his command, with the goal being one year.

The economic engine has been roaring under Trump, with GDP growth accelerating to 4.1 percent in the second quarter on strong consumer and business spending, as well as an increase in exports.

Dimon wouldn’t venture to guess if such a pace is sustainable though.

“It certainly needs to be a hell of a lot better than two percent. I don’t know if the natural rate is three-an-a-half, or four, or three, but it’s not two,” he said.

A similar sentiment was expressed by Treasury Secretary Steven Mnuchin, who said on July 29 that the United States has entered a period of sustainable growth.

“We can only project a couple of years in the future,” he told Fox News. “But I think we’re well on this path for several years. I don’t think this is a one or two-year phenomenon. I think we definitely are in a period of 4-5 years of sustained 3 percent growth at least.”

Dimon remains worried about Trump’s tactic of using the threat of tariffs to force other countries to even the playing field on trade with the U.S. He acknowledged the issues Trump talks about, such as China’s forced transfer of intellectual property from American companies or the non-tariff barriers to trade, but advocated a softer approach of dialog that wouldn’t risk increasing prices for consumers and uncertainty for investors—both disadvantageous for banking business. Still, he hopes Trump’s approach will succeed, acknowledging the President may be proven right in the long term.