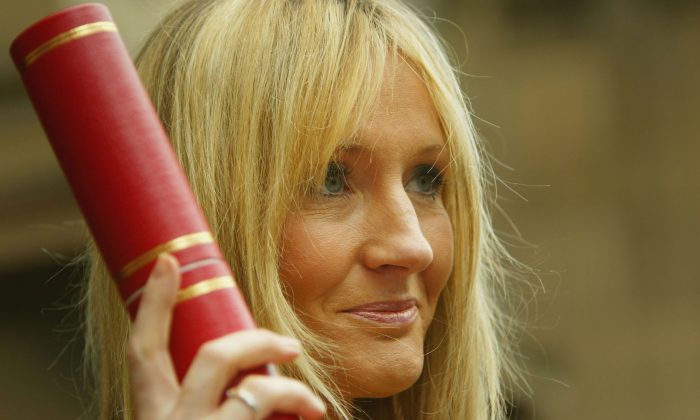 A clever new theory asserts that J.K. Rowling had already given away the clue to Dumbledore’s death in the third Harry Potter book, years before he was finally killed off in the sixth.

Dumbledore, the headmaster of Hogwarts, was murdered by Severus Snape at the end of Harry Potter and the Half Blood Prince.

The theory says that a prophesy by professor Trelawney, who teaches divination, clearly foretells the death of Dumbledore.

In Harry Potter and the Prisoner of Azkaban, professor Trelawney goes to a table where Dumbledore is seated, but declines to sit down because it would bring the number of wizards sitting there to 13, and the first to leave from a table of 13 will die.

The Evolution of Female Pen-Names From Currer Bell to J.K. Rowling

Dumbledore graciously volunteers to get up from the table so that Trelawney can sit down, but there were already 13 wizards at the table. Peter Pettigrew, then transformed into a rat, was in Ron’s pocket. Dumbledore getting up meant that he was marking himself for death.

A New Harry Potter Book Is Coming Out This Summer

The revelation of Dumbledore’s death was one of the most shocking evens in the whole series. Before the sixth Harry Potter book was released, provocateurs from the internet went around bookstores and yelled “Snape Killed Dumbledore” to fans waiting outside for the release.