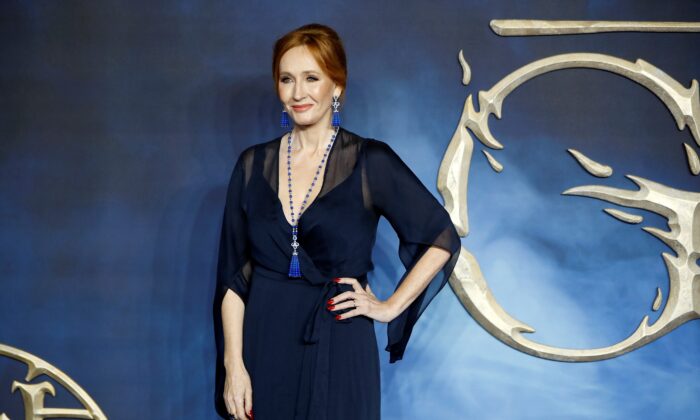 British author and screenwriter J.K. Rowling poses upon arrival to attend the UK premiere of the film “Fantastic Beasts: The Crimes of Grindelwald” in London on Nov. 13, 2018. (Tolga Akmen/AFP via Getty Images)
Viewpoints

J.K. Rowling Benefits Us by Pointing Out Absurdity; Efforts Have Been Made to Silence Her

Intelligent and sensible people are faced these days with a strange dilemma: whether to argue against evident idiocies, and thereby dignify them by the effort to consider them seriously and refute them, or to ignore them as they deserve and thereby leave the field to them unopposed, as it were.

The second alternative is increasingly unviable because the idiocies in question don’t remain confined to the sphere of abstract speculation in universities but descend to earth in the form of the foundations of public policy.

To give but one example: The police in Scotland will henceforth classify the rape of a woman as having been committed by another woman, if the culprit self-identifies as a woman after having penetrated the victim with his (her?) penis. And this, presumably, will give male rapists free access to female prisons.

But of course, what the chief of police really meant was that he would comply with whatever idiocy his political masters would dictate, in order to preserve his job and pension. And then we wonder how it’s possible for totalitarian dictatorships to establish themselves!

The Scottish author of the Harry Potter books, J.K. Rowling, who is sometimes said to be the highest-paid author of all time, commented publicly on the evident absurdity: “War is Peace. Freedom is Slavery. The Penised Individual Who Raped You Is a Woman.”

This was immediately followed by virulent criticism of her, though she was only enunciating (by implication, it’s true) something so obvious that anyone who had enunciated it 20, or perhaps only 10, years ago would have been thought of as a prize bore.

Of course, Rowling is, to an extent, protected by her immense wealth from the consequences of uttering patent—and uninteresting—truths in an increasingly vindictive and perverse totalitarian environment.

If she were but a humble employee of, say, a city council, she would have lost her job by now if she had been foolish enough to express in public what she thought. Even if she were a distinguished professor at a prestigious university, she wouldn’t be safe from retribution.

As it is, she is susceptible mainly to minor pin-pricks, such as not being invited to a celebration of the 20th anniversary of the first film made of her books: an un-invitation, if I may so put it, that combines stupidity, moral cowardice, mean-spiritedness and, worst of all perhaps, ingratitude, for many of the attendees owed their own fortunes almost exclusively to her work.

She has, apparently, received death threats: and once you’ve received a death threat, life isn’t soon the same again. Most people who send death threats have no intention of carrying them out, but you can never be sure that one among them does not mean it; it’s the one who means it who counts, not the 99 who don’t. One lunatic is all that’s required.

It might be said that Rowling didn’t have to comment on the absurdity of the new Scottish legal dispensation, for everyone has the freedom to remain silent (a freedom, alas, too often disregarded), and therefore that, in a sense, she brought the nastiness onto herself, since it was entirely predictable. But if a powerful and privileged person such as she refrains from comment through fear of the response, the totalitarians among us—who are many—have won.

Again, the numerical importance of men self-identifying as women who rape can’t be very great. There are a hundred social problems of far greater numerical and social significance—I do not mean by this, of course, that the individual cases aren’t grave.

But, as the Scottish philosopher David Hume (who, incidentally, recently fell foul of the Zhdanovs of political correctness, despite having been an early opponent of slavery), put in his essay on the freedom of the press, it’s seldom that liberty is lost all at once. More usually, it is subject to a process of whittling.

It matters not a jot whether Rowling uttered a truth or a falsehood, though in fact it was obviously a truth. What she said wasn’t an incitement to commit an illegal act, and she has consistently argued for the decent treatment of transsexuals, whose position in the world is unenviable.

What matters is the attempt to silence her by intimidation and social ostracism. And if the attempt were to work for her, it would work for almost anyone, and then the absurdity of the new dispensation would go unanswered and unopposed.

This doesn’t mean that I would advocate the use of similar methods of intimidation and ostracism directed against those who hold the ludicrous view that a man who rapes a woman and then calls himself a woman actually is a woman and should therefore be designated as such for the record, for statistical purposes, and for penological disposal.

The views of such people may be mocked, but the people themselves aren’t to be threatened or cowed into silence—except, perhaps, by the justified fear of appearing ridiculous, once they realize how ridiculous in fact their views actually are.

It’s alarming that there should be people who don’t see that to call someone a woman who uses his penis to rape a woman is a reductio ad absurdum of the whole transgender ideology. Only someone of a certain degree of misapplied intellectual sophistication could evade seeing it: No person who had not been through an ideological training (or whose career, such as that of the chief of the Scottish police, depended on abject conformity) could fail to see it.

Intellectual fanaticism, which is the source of totalitarianism, consists of following an argument to an absurd conclusion and then questioning neither the premises nor the logic by which the absurd conclusion was reached. Like any other faculty, however, that of perceiving or detecting absurdity withers with disuse. An age of absurdity is an age in which people (or at least, the people who count) are unable to see it.