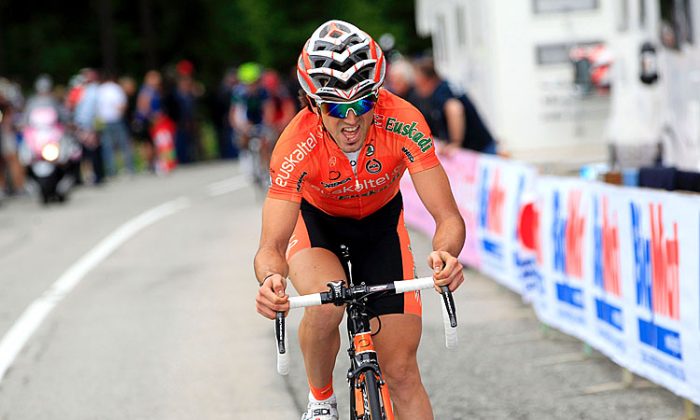 Jon Izagirre got Euskaltel-Euskadi some much-needed publicity Tuesday when he attacked the breakaway to win Stage 16 of the Giro d/Italia.

The Spanish rider earned the climbing-oriented Basque team a win not on a mountain stage, but on what amounted to almost a second rest day—a short, gently sloping uphill stage with a short kick in the tail.

Add to that, most riders couldn’t get on their bikes on the rest day due to rotten weather, and none of the top teams were looking to make huge efforts on Stage 16.

A relatively easy stage to kick off the final week after the rest day, Stage 16 was 100 km of flat followed by73 kilometers of gradual climbing with a steep kick a couple kilometers from the end. 4.5 km out, the road tilted up at nine percents (with 100 meters at 12 percent) for 2300 meters, then flattened out until the finish line.

Though not categorized, the climb was severe enough to slow the sprinters; however, the final two km gave a chance for power climbers to catch up to the pure climbers for a sprint among ascenders.

The breakaway riders worked together, opening a gap of over 12 minutes, until the final ten km when the slope increased and distrustful glances askance began flickering between the riders.

Just past the steepest section Izaggirre attacked, and immediately opened a gap; the steep section had drained his pursuers. De Marchi slowed, letting Frank and Herrada surge past, but the Colnago rider was only resting—while Izagirre rode away on the flat final section, de Marchi bided his time, then out on a burst of speed to take second.

The General Classification remained unchanged, something less likely to happen after Stage 17, with its four enormous climbs.