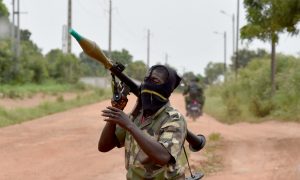 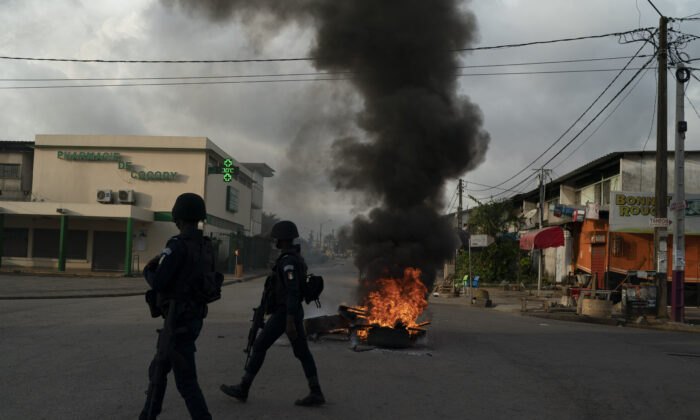 Policemen walk past a burning barricade during a protest after the security forces blocked the access to the house of the former president Henri Konan Bedie, in Abidjan, Ivory Coast on Nov. 3, 2020. (Leo Correa/AP Photo)
Africa

ABIDJAN, Ivory Coast—Security forces in Ivory Coast dispersed opposition supporters with tear gas as protesters erected barricades in another part of Abidjan on Nov. 3 after President Alassane Ouattara was declared the winner of a controversial third term.

Police disrupted a news conference by opposition leaders with international journalists in the afternoon of Nov. 3. After ordering people to leave, the forces fired tear gas in the streets surrounding the press conference.

It wasn’t known where the opposition leaders Pascal Affi N’Guessan and 86-year-old former President Henri Konan Bedie were on the evening of Nov. 3. The two opposition leaders had boycotted the election in a bid to discredit the vote.

On Nov. 2, they had discounted Outtara’s victory, saying the elections weren’t fair and that his mandate to lead Ivory Coast had expired.

There have been widespread fears that post-election violence could erupt in Ivory Coast, where more than 3,000 people were killed a decade ago following a disputed vote.

Opposition leaders say more than 30 people already have died in violence linked to the Oct. 31 election. On the night of Nov. 2, they said their call for civil disobedience was still in effect and told supporters “to remain mobilized until the final victory.”

The U.N. refugee agency, meanwhile, reported that as of Nov. 3 more than 3,200 Ivorians had fled to Liberia, Ghana, and Togo fearing post-electoral violence.

“I fear for the future. What’s the point of giving the results of this election when practically all observers question the credibility? Can the re-election of a contested candidate heal the wounds of 2010?” Abidjan resident Mikael Koffi said on Nov. 3.

“Where are we going with the country so divided that the opposition does not recognize the results of the election on one side and the ruling party does not want to make concessions on the other?”

The electoral commission said early on Nov. 3 that voter turnout was 53.9 percent, according to election officials, though the opposition has maintained only 10 percent of Ivorian voters took part.

Victory celebrations appeared muted, with only small crowds gathering in the pro-Ouattara neighborhoods of Abidjan. By late afternoon, young men had thrown wooden tables and other barricades into the streets of Abidjan’s posh Cocody neighborhood as security forces stepped up their presence in the area because of the opposition meeting nearby.

Ouattara had been expected to easily win the election after the leading opposition figures called on their supporters to stay home. According to official results released on Nov. 3, they received 0.99 percent and 1.66 percent of the votes, respectively. The only opposition candidate who still took part, Kouadio Konan Bertin, won 1.99 percent of the votes cast, the commission said.

Critics, though, say Ouattara and his allies had shaped the race to their advantage long before Election Day—40 of the 44 potential candidates were disqualified from running, including former Prime Minister Guillaume Soro and ex-President Laurent Gbagbo.

Voter Awa Coulibaly said she was happy for the reelection of her candidate, but she said the victory would have been better had his opponents taken part in the process.

“I urge President Alassane Ouattara to always reach out to the opposition by forming an open government,” she said while shopping at a market in the Abobo neighborhood of Abidjan. “Ivory Coast must definitively turn the page on these electoral crises.”

Ouattara has been in power for nearly a decade and initially said he wouldn’t run again, but changed his mind after his party’s candidate died suddenly in July. He maintains that the two-term limit doesn’t apply to him because of a constitutional referendum passed in 2016.

The 78-year-old president, who is popular with international donors, has said he was motivated to run again because of his love for his country. He has said it’s unlikely he would seek re-election again in 2025.

The opposition first tried to get Ouattara disqualified from seeking a third term but that legal effort failed. On Nov. 2, the opposition coalition signaled it would go ahead and form a transitional government despite the official results showing Ouattara headed toward re-election.

They insisted that Ouattara’s mandate to lead Ivory Coast was now finished, and promised they would now start working on organizing “a fair, transparent and inclusive presidential election.”

It wasn’t immediately clear how the opposition could proceed with their plan given that the country’s electoral commissions are heavily weighted with Ouattara supporters as is the constitutional council that is to certify official results from the Oct. 31 election.

International election observers had said Nov. 2 that “a significant portion of the population did not vote,” compared to previous presidential elections.

“These problems threaten public acceptance of the results and the country’s cohesion,” said a statement released by the observer mission carried out by The Carter Center and Electoral Institute for Sustainable Democracy in Africa.

Ouattara was the internationally recognized winner of the disputed 2010 election when then-President Laurent Gbagbo refused to concede defeat. Both men held their own inauguration ceremonies and the standoff persisted for months until pro-Ouattara forces captured Gbagbo from his underground bunker.

Gbagbo was later acquitted of crimes against humanity at the International Criminal Court, though prosecutors are appealing and he remains in Belgium. In the years since, critics say Ouattara’s government has failed to bring about national reconciliation, concentrating prosecutions on the crimes committed by Gbagbo loyalists.