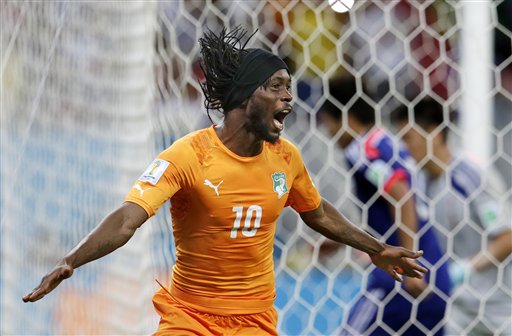 Ivory Coast had good shots throughout the game, but couldn’t find the back of the net in the first half. At halftime, for instance, Ivory Coast had 11 shots (5 on goal) compared with 4 shots for Japan (4 on goal).

The team also had a healthy advantage in terms of possession, staying around 60 percent the entire game.

After knocking on the door for a while, a nice cross yielded a goal for the Ivory Coast in the second half, finally.

Wilfried Bony headed the goal in to make it 1-1 about 20 minutes into the second half.

It was another head off a cross.

Gervinho got the goal.

Japan was unable to get another goal, so the final score was 2-1.

RECIFE, Brazil—Didier Drogba came off the bench to inspire Ivory Coast to a 2-1 comeback victory over Japan in a World Cup Group C match on Saturday.

Drogba, who had been carrying an injury, came on in the 62nd minute when his team was losing 1-0.

The talismanic striker’s arrival immediately lifted the Ivory Coast team and Wilfried Bony and Gervinho scored with headers two minutes apart. Both goals were set up by curling crosses from defender Serge Aurier.

Coach Sabri Lamouchi’s inspired substitution negated Keisuke Honda’s first half goal that had given Japan the lead in a group that also includes Colombia and Greece. Colombia beat Greece 3-0 earlier on Saturday.