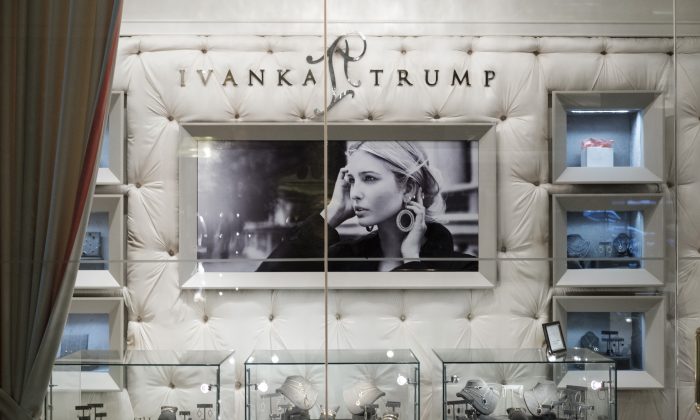 A view of jewelry for sale at the 'Ivanka Trump Collection' shop in the lobby at Trump Tower in New York City on Feb. 10, 2017. (Drew Angerer/Getty Images)
Business & Economy

Ivanka Trump’s Perfume Jumps to No. 1 on Amazon Despite Boycotts

First Daughter Ivanka Trump’s brand of perfume has shot to number one on Amazon’s list of bestselling fragrances despite calls to boycott Trump products.

Ivanka Trump’s Eau de Parfum Spray For Women topped the list for the sixth day in a row. Her line of products have been dropped from some retail outlets amid calls for a “resistance economy,” which encourages shoppers to boycott brands associated with the president.

Earlier this month, Nordstrom made the decision to stop selling the Ivanka line of clothing and accessories amid boycott calls, such as the #GrabYourWallet campaign that started in October. President Donald Trump had not taken kindly to the move.

My daughter Ivanka has been treated so unfairly by @Nordstrom. She is a great person — always pushing me to do the right thing! Terrible!

“My daughter Ivanka has been treated so unfairly by @Nordstrom. She is a great person—always pushing me to do the right thing! Terrible!” the president tweeted.

Nordstrom defended their decision, saying that it was based on poor sales performance of her brand.

“Each year we cut about 10 percent [of brands carried] and refresh our assortment with about the same amount,” a representative for the chain told Business Insider. “In this case, based on the brand’s performance we’ve decided not to buy it for this season.”

“I’m going to give a free commercial here,” Conway said. “Go buy it today, everybody. You can find it online.”

Her comments were sharply criticized by the chairman of the House Oversight Committee, Jason Chaffetz (R-Utah), who wrote in a letter that Conway’s statements “clearly violate the ethical principles for federal employees.”

“As part of the company’s initiative to optimize its online product assortment, we constantly refine that assortment to focus on our most profitable items,” he said. “Amid that streamlining effort, 31 Trump Home items were among the items removed online this week.”

Neiman Marcus, Macy’s, T.J. Maxx, and Wal-Mart Stores are also under pressure to drop Trump products after being named by the #GrabYourWallet online campaign.