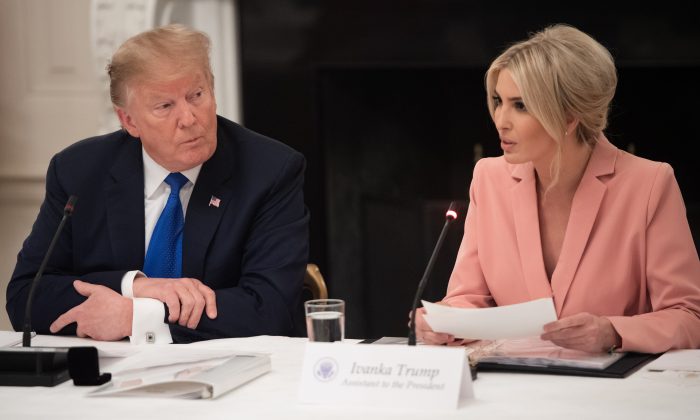 President Donald Trump alongside senior advisor and daughter Ivanka Trump during the first meeting of the American Workforce Policy Advisory Board in the State Dining Room of the White House on March 6, 2019. (Saul Loeb/AFP/Getty Images)
Politics

Ivanka Trump on Impeachment Inquiry: ‘Everything’s a Question of Priorities’

“And we’re delivering, in that fight and on that promise. That’s our priority.”

She mentioned the U.S.-Mexico-Canada trade agreement (USMCA) as an example of an effort the Trump administration has been working on. Trump has been touting her efforts on jobs recently and met with Google CEO Sundar Pichai, cementing an agreement for the tech giant to train 250,000 Americans for information technology careers over the next five years.

Democrats have made little legislative progress since gaining the House in the 2018 midterms, instead choosing to focus on trying to oust President Trump from office, but leaders have insisted they’re trying to get things done with the president while probing him for possible removal from office.

House Speaker Nancy Pelosi (D-Calif.), who announced the impeachment inquiry on the basis of a complaint from a person who didn’t have direct knowledge of Trump’s alleged abuse of the office of the president, argued in a press conference this week that she and other House leaders are working on healthcare, the USMCA, and environmental laws while investigating Trump.

“As we are gathered here today, we are clearly at a place where we are legislating to try to meet the needs of the American people in a transformative way. We are investigating, we are litigating,” Pelosi said during the conference alongside House Intelligence Committee Chairman Adam Schiff (D-Calif.), who is leading the impeachment inquiry.

Trump hit out at Pelosi during the press conference, writing on Twitter: “Nancy Pelosi just said that she is interested in lowering prescription drug prices & working on the desperately needed USMCA. She is incapable of working on either. It is just camouflage for trying to win an election through impeachment. The Do Nothing Democrats are stuck in mud!”

Ivanka Trump also said in her interview that her father is accustomed by now to dealing with being investigated.

“My father has definitely grown used to this. This has been true basically since day one,” she told Fox.

“Certainly since the election, so we’re focused on delivering and fulfilling promises made to the American people.”