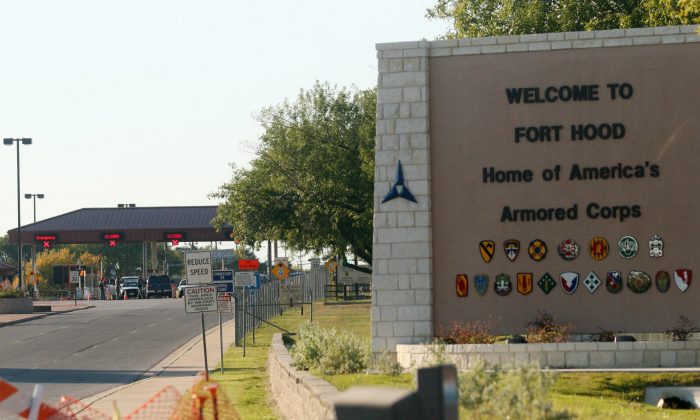 File photo, an entrance is shown to Fort Hood Army Base in Fort Hood, Texas. Fort Hood says there's been a shooting at the Texas Army base and that there have been injuries, on Wednesday, April 2, 2014. (AP Photo/Jack Plunkett)
US

Ivan Lopez was identified as the shooting suspect at Fort Hood that left 14 people injured and four people dead on Wednesday, according to reports.

Citing unnamed sources close to the matter, CBS reported that he took his own life. The shooting reportedly stemmed from a “dispute between soldiers,” the report said.

Lopez was an active-duty soldier, who worked as a truck driver for the U.S. Army, KWTX-TV reported.

CNN and NBC also reported that Lopez was the suspect. Lopez was reportedly in uniform when he opened fire.

President Barack Obama delivered a statement after the shooting. “We’re heartbroken something like this might have happened again,” he said.

He said, “We’re following it closely. … I want to just assure all of us we are going to get to the bottom of exactly what happened.”

“It’s a terrible tragedy, we know that. We know that there are casualties, both people killed and injured,” Secretary of Defense Chuck Hagel also said.

One of the officials, citing official internal U.S. Justice Department updates, said 14 others were hurt. The officials spoke on condition of anonymity because they were not authorized to release information by name.

A U.S. law enforcement official said reports circulating within the Justice Department indicate the shooter died of what appears to be a self-inflicted wound. The official spoke on the condition of anonymity because the investigation is still ongoing.

The Texas Army base was the scene of a mass shooting in 2009. Thirteen people were killed and more than 30 wounded in what was the deadliest attack on a domestic military installation in history.

The Army said on its official Twitter feed that the post was still on lockdown. Injured people were being treated at the post’s Carl R. Darnall Medical Center and other local hospitals.

Outside the base, some relatives of soldiers waited for news about their loved ones.

Tayra DeHart, 33, said she had last heard from her husband, a soldier at the post, that he was safe, but that was hours earlier.

“The last two hours have been the most nerve-wracking I’ve ever felt. I know God is here protecting me and all the soldiers, but I have my phone in my hand just hoping it will ring and it will be my husband,” DeHart said.

Brooke Conover, whose husband was on base at the time of the shooting, said she found out about it while checking Facebook. She said she called her husband, Staff Sgt. Sean Conover, immediately to make sure he was OK, but he couldn’t even tell her exactly what was going on, only that the base was locked down.

“I’m still hearing conflicting stories about what happened and where the shooting was exactly,” Conover said, explaining that she still doesn’t know how close the incident was to her husband.

“I just want him to come home,” said Conover, who moved to Fort Hood with her husband and three daughters two years ago.

In Chicago, President Barack Obama vowed that investigators will get to the bottom of the shooting, seeking to reassure the nation whose sense of security once again has been shaken by mass violence

In a hastily arranged statement, Obama said he and his team were following the situation closely but that details about what happened at the sprawling Army post were still fluid. He said the shooting brought back painful memories of the 2009 attack.

Obama reflected on the sacrifices that troops stationed at Fort Hood have made — including during multiple tours to Iraq and Afghanistan.

“They serve with valor, they serve with distinction and when they’re at their home base, they need to feel safe,” Obama said. “We don’t yet know what happened tonight, but obviously that sense of safety has been broken once again.”

The president spoke without notes or prepared remarks in the same room of a steakhouse where he had just met with about 25 donors at a previously scheduled fundraiser for the Democratic National Committee. White House officials quickly pushed tables to the side of the room to make room for Obama to speak to the nation.

The November 2009 attack at Fort Hood happened inside a crowded building where soldiers were waiting to get vaccines and routine paperwork after recently returning from deployments or while preparing to go to Afghanistan and Iraq.

Army psychiatrist Nidal Hasan was convicted and sentenced to death last year in that mass shooting.

According to testimony during Hasan’s trial last August, Hasan walked inside carrying two weapons and several loaded magazines, shouted “Allah Akbar!” — Arabic for “God is great!” — and opened fire with a handgun.

Witnesses said he targeted soldiers as he walked through the building, leaving pools of blood, spent casings and dying soldiers on the floor. Photos of the scene were shown to the 13 officers on the military jury.

The rampage ended when Hasan was shot in the back by Fort Hood police officers outside the building, which left him paralyzed from the waist down. Hasan is now on death row at the military prison at Fort Leavenworth in Kansas.

After that shooting, the military tightened security at bases nationwide. Those measures included issuing security personnel long-barreled weapons, adding an insider-attack scenario to their training, and strengthening ties to local law enforcement, according to Peter Daly, a vice admiral who retired from the Navy in 2011. The military also joined an FBI intelligence-sharing program aimed at identifying terror threats.

In September, a former Navy man opened fire at the Washington Navy Yard, leaving 13 people dead, including the gunman. After that shooting, Defense Secretary Chuck Hagel ordered the Pentagon to review security at all U.S. defense installations worldwide and examine the granting of security clearances that allow access to them.

Asked Wednesday about security improvements in the wake of other shootings at U.S. military bases, Hagel said, “Obviously when we have these kinds of tragedies on our bases, something’s not working.”