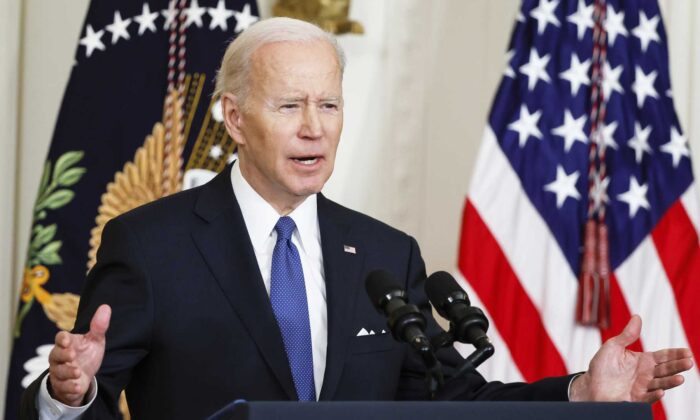 U.S. President Joe Biden speaks during an event to mark the 2010 passage of the Affordable Care Act in the East Room of the White House on April 5, 2022. (Chip Somodevilla/Getty Images)
Viewpoints

“At what point does Joe Biden’s verbal incontinence start to become a mortal threat to Americans?” asks Gerard Baker in The Wall Street Journal—a purely rhetorical question meant to be understood as signifying that it is at this point—the point of calling for régime change in Russia, as Biden did recently—that he becomes a mortal threat to Americans.

After noting the advice of Sun Tzu to generals in prospect of victory to “build your opponent a golden bridge to retreat across,” Green draws a telling contrast with General Biden’s insistence that the Russian president, Vladimir Putin must step down—and presumably submit himself to be tried for the war crimes our president also claims he is guilty of.

This would be the same Vladimir Putin whose finger, for so long as he remains in the office he currently holds, is on the button that will, if he chooses, launch thousands of nuclear warheads—not at Ukraine, but at us.

You talk about “war crimes,” quoth Vlad. “I’ll give you war crimes.”

Instead of Sun Tzu’s golden bridge to peace, writes the VodkaPundit, “Biden has backed him into a corner and dared him to lash out. That’s the idiot’s way to start World War III, but from Joe Biden, what else did you expect?”

What indeed! Yet the remarkable thing is that the president’s media supporters as well as his detractors appear to see only what they expect to see in his words, however maladroit. Where the latter see an idiot’s catastrophic blunder, the former see at worst the sign of highly creditable moral feelings and at best a foreign policy genius’s masterstroke.

It was former Secretary of Defense and CIA Director Leon Panetta who put the gaffe down to the president’s warm heart, saying “he’s Irish [and] really has a great deal of compassion when he sees that people are suffering. And I think it overwhelmed him in the sense of seeing all of the horrors that were resulting from this war.”

But this was faint praise compared with that of Eugene Robinson of The Washington Post, who wrote that “Biden’s Putin ad-lib wasn’t a gaffe. He was right.”

Or Allan Katz of Newsweek: “This Is Joe Biden’s Finest Moment”—an opinion apparently shared by David Rothkopf of The Daily Beast, who thought the speech bore comparison to Winston Churchill’s “Iron Curtain” speech at Fulton, Missouri, in 1946.

Not surprisingly, Joe himself favors this view over that of the VodkaPundit.

Oddly enough, this is almost true, since nobody believes anything he says. Except that, in this case, some people do believe him, albeit only with supporting evidence. One such is the historian Niall Ferguson, who writes for Bloomberg and who claims to have heard from “a senior administration official” at a private event that “The only end-game now is the end of Putin [sic] regime.”

The administration’s thinking, according to Ferguson, appears to be that Putin and his “regime” can be brought down by a carefully judged supply of sophisticated weaponry to Ukraine by the United States and Europe—not so much as to provoke a direct Russian retaliation, but just enough to keep Russian troops bogged down in an unwinnable “quagmire,” like Afghanistan, perhaps for years.

Presumably, some discontented generals or other Kremlin officials will eventually get tired of living in “a pariah state that will never be welcomed back into the community of nations” and will then “take down” the man who got them into another forever war—which will also, according to Ferguson’s “senior administration official,” put an end to the Sino-Russian alliance.

This is also the administration’s thinking in the opinion of Curt Mills of The American Conservative, who writes that “the fascinating thing about this strategy is the way it combines cynicism and optimism. It is when you come to think of it, archetypal Realpolitik to allow the carnage in Ukraine to continue; to sit back and watch the heroic Ukrainians ‘bleed Russia dry’; to think of the conflict as a mere subplot in Cold War II, a struggle in which China is our real opponent.”

What could go wrong?

Leave aside for the moment the appalling cynicism of prolonging Ukraine’s suffering to achieve America’s foreign policy aims. Even Biden’s celebrated Irish compassion for suffering must see that it won’t be only the Russians who are “bled dry.”

Even if it were, even if we could be confident in the administration’s judgment of exactly how much provocation Putin is prepared to endure before he launches his nukes, how can we believe that this strategy has been designed in such complete disregard of the old military maxim that “the enemy gets a vote”?

In other words, Putin may not be content either to stay in this quagmire of America’s devising and be bled dry or quietly to withdraw into his own “pariah state” to await the inevitable coup d’état. He does have other options, and I don’t think we’re going to like any of them.

It begins to look as if, whatever view we take of the sincerity of the Biden “gaffe” itself, it’s still more likely to be what VodkaPundit calls “the idiot’s way to start World War III” than it is to be for the good of either Ukraine or the United States.