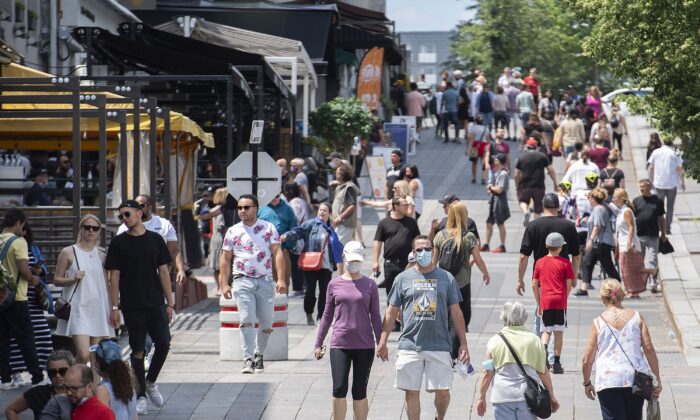 It’s Time to Put the Pandemic Era Behind Us

Are we finally at the end of the pandemic? Could it possibly be that the COVID-induced madness that has done more harm than good for the last 19 months is finally receding? There are some glimmers of hope.

The British government announced this week that come Jan. 27, it will end mandatory face coverings and vaccination passports. The government cited the fact that the Omicron wave has already peaked, and more people are boosted against what is now deemed an endemic virus.

On Jan. 20, the Ontario government announced a plan to gradually end COVID restrictions. “We can be confident that the worst is behind us,” Doug Ford said. The plan, to go in effect on Jan. 31, will increase gathering limits and allow restaurants, cinemas, and malls to operate once again at 50 percent capacity. Around March 14, all limits on gatherings will be lifted, although proof of vaccination will still be required. Though there is no clarity on when mask mandates and vaccine passports will end, the plan to phase out other measures is certainly a step in the right direction—if the government sticks to it. And if they do, it’s possible other provinces will follow suit.

That would be the right direction to go in, given that the appetite among Canadians for further lockdown measures has been quickly dwindling over the last several months.

Polling last year by Ipsos showed that support for lockdown measures had dropped from 70 percent in July to 56 percent in December. A December poll by Maru Public Opinion indicated that Canadians are ready to live with COVID, with a majority of respondents saying they weren’t changing their habits much to avoid infection and were still going about their daily activities.

One reason support for lockdown measures is fading could be due in part to the measures’ long-term side effects.

One depressing example is the increase in overdose deaths during the pandemic, hitting record highs. The Saskatchewan Coroners Service reported earlier this month that 464 people died of overdoses in 2021, up from the previous record-setting number of 327 in 2020. The British Columbia Coroners Service reports that 1,782 people died of an overdose in the first 10 months of 2021, while 1,765 died in 2020. In Ontario, the COVID-19 Science Advisory Table reported in September 2021 that opioid overdoses had increased by 60 percent since the beginning of the pandemic.

Along with this are the mental health effects on youth that school closures have had. In July 2021, SickKids released research showing how dire the situation is and how long-lasting the effects of the COVID-19 period might be. During the second wave, for example, over half of the 758 children and 70 percent of teens surveyed attested to developing symptoms of clinical depression. Sources of increased anxiety and depression among youth, the research found, included the lack of extracurricular activities and other support services that kept them stimulated and on the right track in terms of their development.

With these problems only continuing to fester, and given the mildness of Omicron, it is time to shift the focus to recovering from the fallout caused by COVID-19 and the restrictions, and finally move beyond the pandemic phase.

There are obstacles to be overcome of course, such as the hyper-politicization of the pandemic and the cynical usage of the crisis by those in elite positions. As the months have dragged on, it has become ever more clear that many of the decisions have been informed almost entirely by political calculations instead of being directed by the data. This accounts for why so many of the knee-jerk, inconsistent measures amounted to little more than theatre.

Fearmongering by the media also has to stop.

As for the continued doomsday predictions from public health experts who have enjoyed their time in the spotlight, elected officials need to finally call time on them and move quickly toward putting this era behind us.

Canadians are ready to move on.