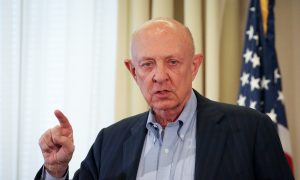 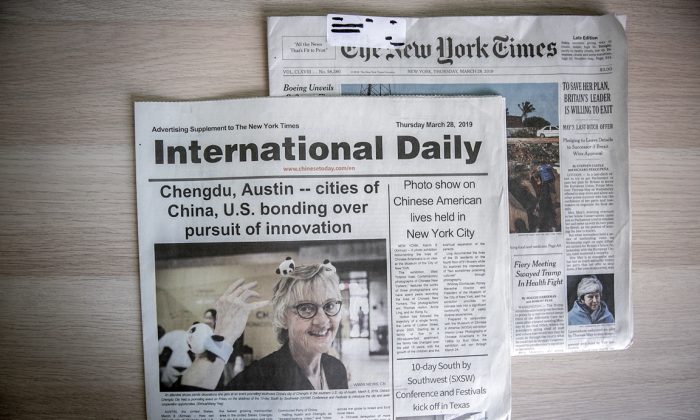 An International Daily insert into the March 28, 2019 edition of The New York Times. (The Epoch Times)
Viewpoints

It’s Time to Address Paid Chinese Disinformation in US Newspapers

Major news outlets in the United States helped create more than two years of hysteria and political attacks about rumors that President Donald Trump had colluded with Russia to win the 2016 elections.

With the recent release of special counsel Robert Mueller’s findings, that narrative has now been proven false. But the debate over foreign interference and propaganda in the United States shouldn’t stop just yet.

A good question to ask is that if news outlets, including The Washington Post and The New York Times, care so much about foreign influence, as they demonstrated in their coverage of the collusion allegations, why do they accept money to print propaganda from a foreign regime?

On March 27, The Washington Post ran similar Chinese state propaganda in a “China Watch” insert. The insert included a “Tibet Special” claiming to show the “festive atmosphere” in Tibet, where the Chinese Communist Party (CCP) is trying to crush traditional beliefs and culture.

A recent Freedom House report that rates freedom on a scale of 1 to 100, with 100 being the freest, gave Tibet a rating of 1. It stated that CCP authorities are “suppressing any signs of dissent among Tibetans, including manifestations of uniquely Tibetan religious belief and cultural identity.”

When it comes to civil liberties and political rights, Freedom Watch has a scale of zero to 40, with 40 having the most rights. Under the CCP’s tyranny, Tibet got a negative 2. The Washington Post allowed the regime that suppresses Tibetan freedom to publish propaganda that makes the situation seem to be the opposite—allowing the CCP to mislead the Post’s readers.

Keep in mind that a large part of the narrative about Russia interference in U.S. elections was around paid trolls spending several thousand dollars on Facebook ads. How many hundreds of thousands of dollars does the CCP spend to have its propaganda delivered straight to American doorsteps?

Also, remember that when the Director of National Intelligence released the Jan. 7, 2016, report claiming that Russia interfered in the 2016 election, the main piece of evidence used in that conclusion was that Russia funds its RT news outlet, and the RT news outlet was reporting negatively on Hillary Clinton and positively on Trump.

In other words, the core basis of the DNI assessment on Russian interference—at least in its public report—was on political reporting in a foreign news outlet. To enhance its claims, it noted some of these RT stories were picked up by U.S. news outlets.

Yet, China has taken it many steps further by paying major U.S. newspapers to print its propaganda directly.

Meanwhile, the CCP hasn’t been vague with its intentions. It has actually been extremely direct about its intention to use media and propaganda as a military tool.

Media warfare is listed as part of the CCP’s Three Warfares (“san zhong zhanfa”) doctrine, alongside legal warfare and psychological warfare. The Three Warfares system was approved by the CCP’s Central Military Commission in 2003 for its military information operations.

Its media warfare doctrine directs “overt and covert media manipulation,” according to The Diplomat in 2015.

Psychological warfare, meanwhile, is about misleading people on a more fundamental level. Rather than try to alter surface information, it aims to alter how people interpret information.

The CCP’s use of major U.S. newspapers to run its propaganda would fit in perfectly with this military strategy for deception.

This ties directly to a term that re-entered popular discussion amidst all the Russia collusion hysteria: disinformation.

Disinformation is about spreading false information, with a grain of truth, through otherwise trusted and credible channels in a targeted society. That is, legitimate channels, such as major U.S. newspapers.

Under the Soviet Union, disinformation operations often used complex systems of controlled news outlets, fake nonprofits, and planted experts. These would be used to create false footnotes for arguments or to manufacture false events—which could then be used to frame political narratives.

Under the Chinese regime today, however, all they need to do is dish out a bit of cash, and American gatekeepers of information will publish their disinformation willingly.