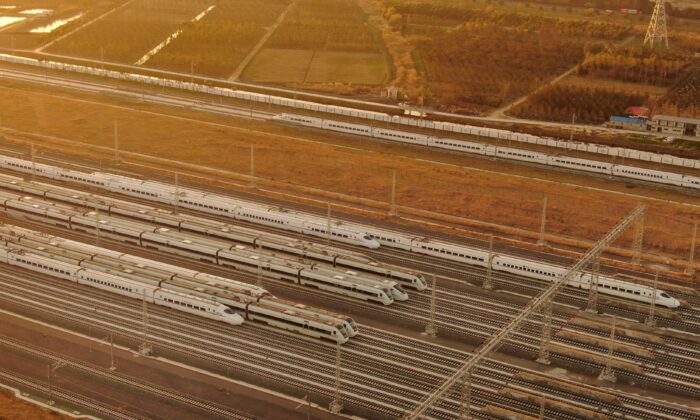 Thirty years ago, the United States began to open its doors to China under the “constructive engagement” policy. The hope was to help liberalize China and steer it to be a “stable, open, and non-aggressive” world player, as former President Bill Clinton envisioned.

At that time, China’s technology lagged behind the United States’. It was unthinkable then that China would one day become a tech competitor. After three decades of open trade, the United States is waking up to a world in which China seems to be within arm’s length of replacing it as the world’s top tech provider.

How did this happen? Of course, the Chinese people’s diligence and intelligence are not to be questioned. However, what truly enabled China’s tech growth is the systematic, state-led and all-out acquisition of U.S. technology, intellectual property (IP), and know-how. As a matter of fact, technology theft from China now costs America $225 billion to $600 billion annually. To put this in perspective, this is up to 38 percent of the total revenue of the U.S. IT industry.

How is this possible? How did China accomplish this mammoth task? Let’s delve into the tactics the regime uses to acquire American technology.

From the very beginning, the U.S.-China trade relationship was plagued by IP theft. From counterfeit purses and piracy VCDs in the early days, to computer software later on, China has never stopped stealing. But China’s ambition has moved beyond copycatting consumer products. In Chinese leader leader Xi Jinping’s “China Dream,” a critical component is to achieve world dominance in cutting edge technology such as biotech, artificial intelligence (AI), and 5G, and to do it at lightning speed. As the Chinese regime’s propaganda often boasts, the technology progress that took the West a couple hundred years was completed in China in just a couple decades.

Extraordinary speed requires extraordinary approach. To achieve Xi’s growth goal, the Chinese regime has developed a variety of tactics to access the crown jewels of U.S. technology. Some of these tactics are nefarious or illegal, but some are actually legal, or fall in less regulated gray areas. They could be operated in the United States, in China, or virtually.

Of course, physical and cyber espionage by China has been a classic method that many are well aware of. It has grown only more rampant today: about 80 percent of all federal economic espionage prosecutions in recent years were allegedly related to benefiting the Chinese regime, and about 60 percent of all trade secret theft cases have had a nexus to China.

But the damage of espionage is nothing compared to the legal tactics. U.S. companies that try to enter China often find themselves being forced to hand over the complete know-how.

According to a 2019 report by U.S.-China Economic and Security Review Commission (pdf): “In many industries, foreign firms must enter into joint ventures to invest or operate in China. Joint ventures (JVs) are often the source of Chinese companies’ most technologically advanced and innovative procedures and products, acquired through technology transfer from their foreign JV partner.”

In 2004 (pdf), China solicited bids from foreign companies to build 200 high-speed train sets. The $2.4 billion order was only the beginning of China’s long-term plan. The terms were designed to force global market leaders to transfer technology to China. Foreign companies were not allowed to bid unless they went into a joint venture with a Chinese firm. Only two Chinese companies were allowed to work with foreign companies. The foreign company awarded with the bid was required to first complete tech transfer to its Chinese partner, and it would receive payment only after the Chinese partner passes the “tech transfer execution evaluation.” The end products would need to be China-branded.

Chinese media later gloated over how China played the four bidders against each other in negotiation to impose harsh terms. China eventually worked with all four in the coming years and thus absorbed the technology from all the world industry leaders.

But the worst is yet to come. Fully armed with the technology, China started to aggressively promote high speed rail projects abroad as a foundation of its Belt and Road initiative (BRI, also known as “One Belt, One Road). Japan and other countries found it hard to compete with China because of China’s lower cost, high labor supply, and speed of construction. By now, China is the world’s top high-speed rail producer, with a 70 percent market share.

It’s bad enough that China steals technology within its own borders. But in recent years, China has pushed the frontline deep into the U.S. territory through acquiring investments in U.S. companies. According to Public Citizen’s Chinese Corporate Investment Database, “Chinese financial interests have acquired more than $120 billion of assets in the U.S. economy since 2002. Fifteen Chinese government entities (sovereign wealth funds and state-owned enterprises) and government-connected private sectors firms account for nearly 60 percent of this activity.”

You may not have realized how ubiquitous Chinese money already is in the daily lives of Americans. The following are some brands or companies that either have been acquired by Chinese companies, or are heavily invested by China: GE Appliances, Chicago Stock Exchange, AMC, Legendary Entertainment, Riot Games, Motorola Mobility, Smithfield Foods, Snap, Lyft, Reddit, TikTok, Airbnb, Brooklyn Nets (owner of Barclays Center), Ironman Triathlons, Universal Music Group, Warner Music, IBM, Hilton Hotels, and others.

These are just some of the better-known names. China also heavily invests in America’s hi-tech companies in biotech, automatic vehicles, virtual reality, AI, and communications. Most of these technologies can provide dual military and civilian capabilities.

American talent is another target of the Chinese regime.

“Project 111, for example, was launched by the Chinese government in 2006 to recruit 1,000 foreign experts in strategic sectors from the world’s top 100 universities and research institutes. By 2009, it had recruited 39 Nobel Prize winners and 591 academics. Similarly, the Thousand Talents Program was launched in December 2008 and by mid-2014 had brought more than 4,000 foreigners to China’s scientific laboratories, companies, and research centers. Research and startup funding provided under these and similar programs are used to incentivize foreign experts and entrepreneurs to either split time between positions overseas and in China or base their work entirely in China,” Sean O’Connor, policy analyst, wrote in his report to U.S.-China Economic and Security Review Commission on May 6, 2019.

There are numerous other projects in China at the central and local government levels. It is impossible to know how many U.S. talents have been acquired through these programs.

The short-term gains can be blinding, such as a billion-dollar contract or a large sum of research funds. But it is important for Americans to understand that the Chinese regime launched an undeclared war against the United States decades ago.

With the help of U.S. technologies, the Chinese Communist Party has gained more power than ever, and is getting more aggressive each year. Xi Jinping’s “China Dream” is not about freedom, humanity, and peace—it’s a dictator’s dream to rule the world.

It is time for Americans to take action.