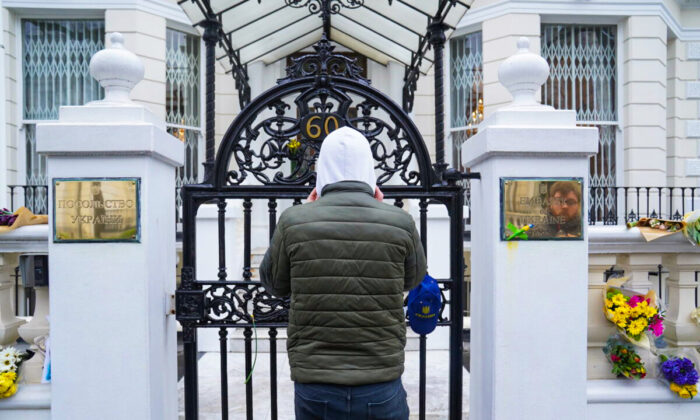 ‘It’s the Right Thing to Do’: Britons Sign up to Fight in Ukraine

Britons signing up to fight alongside Ukrainians say they are doing it out of “solidarity” and because “it’s the right thing to do”.

A steady stream of people, some with military experience and others who have never seen action, arrived at the Ukrainian embassy in west London on Tuesday to volunteer to fight against Russia’s invasion.

They spoke of wanting to “make a difference” and feeling like they “should be doing something” to help.

Ukrainian President Volodymyr Zelensky has announced the formation of an “international legion” to help defend his country and appealed to foreign volunteers to come forward, promising them arms to fight against Russian troops.

Foreign Secretary Liz Truss said she would “absolutely” support British nationals who chose to go to help fight against the Russian invasion, though several of her Cabinet colleagues and Downing Street officials later effectively contradicted her, discouraging people from going.

Liam Hawkins, 30, drove to the Ukrainian embassy from Deptford, south east London, to sign up to help refugees stuck at the border in a humanitarian capacity.

The 30-year-old father told reporters: “I haven’t slept since this invasion and I just can’t stay at home with my babies and my missus and do nothing.

“Right is right and wrong is wrong, regardless of nationality or creed or whatever.

“Sit there and count your money when this is going on next door? Doesn’t mean nothing, so I’m going to do the right thing.

“I know it’s dangerous, people are trying to talk me out of it, but I believe I can make a difference.”

Two former soldiers, Tom, 20, and Lukas, 21, who declined to give their last names, said they were “definitely not” worried about travelling to Ukraine to fight.

Tom, who served in the Royal Tank Regiment for three-and-a-half years, said: “When I get there, the training we’ve had will kick in.

“If I fall, I fall. At least I know that I’ve fallen for doing something right.”

The duo, who plan to take their own military equipment and medical supplies, said they have not told their families and will simply leave a note when they go.

“Whether my family thinks it’s a good idea or not, it doesn’t matter.

“The world’s bigger than just the UK and I know what’s right and wrong,” Tom said.

Lukas, who travelled to London from near Manchester to sign up at the embassy, said he joined the Army at 16 but had no conflict experience.

He said he wanted to go and help.

Oliver Miller, 29, a mechanical engineering student from Chelmsford, Essex, who also had military experience, said he is “hoping to go out and help somehow”.

“I don’t want to sound cliched and cheesy, but sometimes it’s something you feel like you have to do.ƒ

He said he has not told his “very supportive” family and girlfriend.

“Not sure how supportive they’ll be of this decision, we shall see.”

Thomas, who did not want to give his full name, said he wanted to support the close friends he made while living in Ukraine for 17 months.

He spent time in various cities, including Kyiv, Lviv, Kharkiv and Mariupol, teaching and working as a techno DJ.

“I feel like I should be doing something because I’m not there with them and I should be and I’m just trying to work out what I can do.”

Asked if he would fight, he said he did not have any training.

“I barely know how to use a gun.

“If that helps them I will, but if I can do something which is more towards aid or in some format, then I can do whatever role that I’m suited to.”

Andrew Duda, Wolverhampton branch chairman of the Association of Ukrainians in Great Britain, said he had “had some phone calls” from people in the UK wanting to travel to fight the Russians in Ukraine, but had referred them to the embassy in London.

He said: “Anybody that does want to fight, we’ve been told to advise them to contact the Ukrainian embassy in London.

“I’m not sure what the procedure is once people get to the embassy, but that’s what we’ve been told.”

The Ukrainian embassy in London could not be reached for comment.