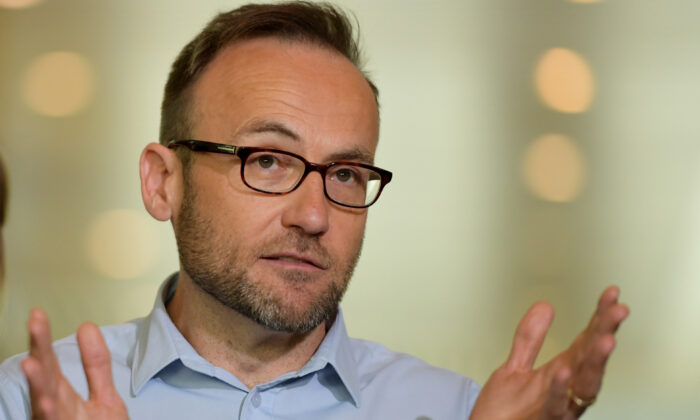 Adam Bandt, the newly elected Marxist leader of the Australian Greens, has committed his party to an Alexandria Ocasio-Cortez style “Green New Deal.”

On Feb. 4 this year, Bandt, a long-time co-leader of the party, was elected unopposed to the party leadership. The same day, he used his very first press conference to advertise the Australian Greens brand new Green New Deal-themed website and commit the party to the new program.

The Green New Deal concept has been around in some form or another for many years, but the latest version is a very new creation.

The Green New Deal document was written over a single December 2018 weekend by the staff of New York Congresswoman Alexandria Ocasio-Cortez and three far-left groups, described by the New Yorker as: “the Sunrise Movement, a grassroots climate organization; the Justice Democrats, which recruits and supports leftist candidates; and an upstart policy shop called the New Consensus.”

The Green New Deal wasn’t written on the back of a restaurant napkin—but it was almost as amateurish.

Just about everyone involved was new to lawmaking.

“We spent the weekend learning how to put laws together,” Ocasio-Cortez’s chief of staff, Saikat Chakrabarti, told New Yorker journalist Benjamin Wallace-Wells. “We looked up how to write resolutions.”

The Green New Deal is basically a plan to completely centralize economic planning in the name of tackling “climate change.”

The draft text called for a congressional committee, which would be “fully funded and empowered to draft legislation … to map out a ‘detailed national, industrial, economic mobilization plan’ capable of making the U.S. economy ‘carbon neutral’ while promoting ‘economic and environmental justice and equality,’” according to The Intercept.

In other words, socialism.

Ocasio-Cortez is a member of the 55,000-member strong Marxist group Democratic Socialists of America (DSA). With strong backing from the DSA and the Communist Party USA, the Green New Deal soon became ubiquitous in the Democratic Party’s dominant left wing and is now endorsed by nearly 100 U.S. congressmembers and several Democratic presidential candidates.

Bandt fully understands the origins and intent of the Green New Deal that he’s now promoting.

In an article in the DSA-aligned magazine Jacobin, published just days before assuming the Australian Greens leadership, Bandt laid out his vision for an Australian Green New Deal:

“We need government intervention on the scale of the Apollo program. We need a Green New Deal for Australia, a transformative plan to get us out of the overlapping crises of climate emergency and economic inequality.

“With a Green New Deal, we can break free from the false dichotomy that we must choose between tackling the climate crisis and delivering better outcomes for workers. …

“Taking the urgent action we need to transform our society is an opportunity for equality and justice. This is our chance to shift Australia to a clean, renewable economy while building a more caring and equal society.”

In March 2018, SEARCH Foundation hosted Bhaskar Sunkara, a DSA comrade, Green New Deal advocate, and Jacobin editor, at Sydney Trades Hall for a talk entitled “Corbyn, Sanders and the next left.” The Sydney-based SEARCH Foundation, which works closely with the Australian Greens, is the continuation of the now defunct “moderate” wing of the Communist Party of Australia (CPA).

Former Australian Greens Sen. Lee Rhiannon, once a high-ranking pro-Soviet communist, is a close ally of Bandt and is also a SEARCH Foundation committee member.

Writing in the Guardian, Bandt made it clear that he sees the Green New Deal as a vehicle for putting his personal values into action:

“The two elements of a Green New Deal – government taking the lead to create new jobs and industries, and universal services to ensure no one is left behind – are the values I have been fighting for my whole adult life.”

And those values are undoubtedly socialist.

In 2010, Bandt became the first Australian Greens member to be elected to the Australian parliament—the House of Representatives—in a federal election.

Bandt had started out in politics as a teenage member of the Australian Labor Party but moved to the far-left while studying law at Perth’s Murdoch University in the early 1990s.

By the time Bandt became a leader of Left Alliance, Resistance had left the organization after a proposed CPA–DSP merger had foundered. In 1991, the CPA dissolved and re-formed as the short-lived New Left Party. In 1992, the Australian Greens were formed out of several smaller state-based Green parties.

In 1995, while he was a student, Bandt described the newly founded Greens as a “bourgeois” party, writing in a memo on a Marxist student website that “Communists can’t fetishise alternative political parties, but should always make some kind of materially based assessment about the effectiveness of any given strategy come election time,” according to The Australian.

In other words, the Greens could be a useful way to promote socialism.

In 2008, Bandt completed a Ph.D. at Monash University in Melbourne with his thesis titled “Work to Rule: Rethinking Marx, Pashukanis and Law.” His supervisor, Andrew Milner, was a former member of the British Socialist Workers Party turned Australian Greens supporter.

In December 2010, the first “Union and Community Summer School” was held in Melbourne.

Called “Winning Our Rights,” the school bought together “experienced labour activists from different generations and most left political traditions, to discuss the way forward for the union movement,” according to Green Left Weekly.

Discussion on the second day focused on “unions’ role in the climate action movement and building the union fightback.”

The Australian Greens are a minor political party, holding only a few seats in Australia’s two federal chambers of government. However, they sometimes hold the balance of power between the larger Labor and Liberal parties. This can give the tiny party a disproportionate influence on Australia’s political direction.

Under the much further left Bandt leadership, the Australian Greens will be much more aggressive in promoting their socialist agenda. We may hear much more about the Green New Deal from “downunda” in the next months and years.