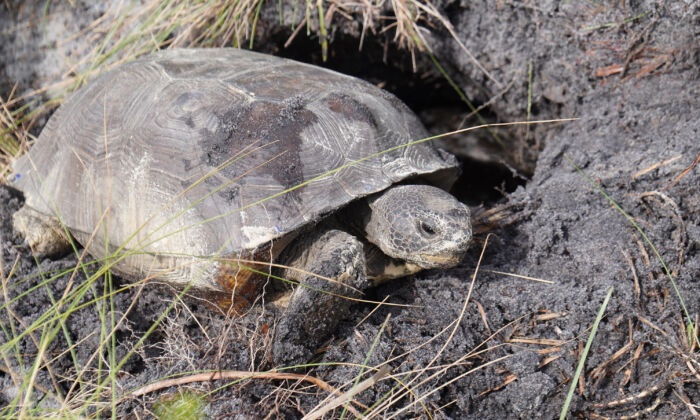 A Gopher tortoise makes itself at home at a Lyke's Brothers relocation site in Florida on Oct. 8, 2021. (Jann Falkenstern/The Epoch Times)
US

With more than 900 people a day moving to Florida, developers and builders are scrambling for prime building land, ground that is likely already inhabited by a state native, the Gopher tortoise.

This burrowing turtle is a threatened species that likes flat pine woodlands and well-drained sandy soil.

Unfortunately, for the Gopher tortoise, it is the same terrain that developers love.  The dry, flat terrain makes access for heavy equipment easier and allows for less problematic land excavation in order to build homes and stores.

To mitigate the effects of developers’ seemingly insatiable appetite for ground, wildlife officials are seeking landowners to do their part for the environment and open up their properties to house “tortoise refugees.”

Florida Fish and Wildlife Conservation Commission (FWC) describes Gopher tortoises as burrowing herbivores whose dwellings provide homes and shelter for more than 350 animals and insects. Some of the symbiotic species are themselves “threatened.” The commission designates the tortoises as a “keynote species”  that shares its dwellings with owls, skunks, armadillos, snakes, coyotes, and many species of insects.

The length and width of the burrows vary, but an average burrow can be 65 feet long and as deep as 26 feet.  The Gopher tortoise has a lifespan averaging 40 to 60 years in the wild and as many as 90 years in captivity. Their size and weight will vary depending on what part of Florida they reside in.  They weigh anywhere from eight to 15 pounds.

The tortoise resembles any other turtle you may see along creek banks in the countryside but, differences are clear upon closer inspection.

What makes them unique is their ability to burrow and to share and coexist.  These laissez-faire or “live and let live” reptiles are mostly chocolate brown in color and have leathery scaled front feet with “shovels” that allow for burrowing.

Tortoise parenting techniques are somewhat left to be desired as they seem “unattached” to their young, even before the eggs are hatched.  Very few eggs make it to hatchlings as predators, such as raccoons, will rob the nest in search of protein.

Wildlife experts estimate only 3 to 5 percent of the young tortoises survive, because adults will lay their eggs at the entrance of the burrow. This allows them to stay warm, but makes it easy for predators to discover them.

However, their biggest danger is man.

On Oct. 5, a Charlotte County construction project ground to a halt as a Gopher tortoise burrow was found.

Wayne Pitchford, owner of Pitchford Excavating, is a native Floridian and was familiar with what he saw.

“I saw the burrow. I knew what it was and what it belonged to, and I knew what I needed to do.”

Pitchford said he is sensitive to the threatened species when it comes to his excavation efforts. When he discovered the burrow, he contacted a company that is licensed to take the tortoises away to a new home. He said the fines, penalties and prison time associated with threatened species can be costly, both monetarily and damaging to a company’s reputation if you “handle things in the wrong way.”

To make sure the tortoise remains with the burrow, a silt fence needs to be installed around the area where the tortoise is, he said. This could cost approximately $800 to complete for this particular job, but to relocate the turtle and summon a removal specialist costs anywhere from $1,800 to $2,500 per tortoise. It is incumbent upon the removal company to contact FWC and notify them that they have tortoises that need to be relocated. If they do not, they are subject to lose their license, have fines imposed and face jail time.

Florida law is clear on injuring or killing a threatened Gopher tortoise.  Breaking this law is a third-degree felony and carries with it up to a $5,000 fine and a five-year prison sentence per incident.

The shutdown of his job site could take as little as three weeks, or as much as four months, Pitchford said.

“This one will cost me $1,500 per day until FWC says we can go back in,” he said. “But I have other jobs that will sustain me while the removal is taking place so that it won’t impact me as hard.”

Despite shutting down his project, Pitchford remains a fan of the sluggish reptile.

“I think they’re beautiful,” he said of the tortoise. “I love them. But if they aren’t allowed to thrive in their natural habitat it could be devastating for the ecosystem of Florida.”

Pitchford recalled a “few years ago,” he was on a four-lane highway in Charlotte County when he saw a tortoise trying to navigate across heavy traffic and he knew he had to help before tragedy struck.

“I saw the tortoise and pulled over my dump truck, grabbed a shovel, scooped it up [in it] and made sure he made it across all four lanes without getting run over,” he said. While some motorists were giving him a thumbs up for a job well done, others were mad and were giving him the “middle finger” and hurling obscenities for “holding up traffic,” he recounted.

In Pitchford’s case of aiding the tortoise, the commission will allow anyone to move a Gopher tortoise across a road, but it must be in the same direction that the tortoise was headed, as Pitchford had done.  They also caution safety when doing so. They warn not to move the tortoise to another location on your own, or put it in your vehicle as this “constitutes illegal possession.”

In 2007, after the tortoises were deemed threatened, the FWC adopted enhanced protections that include strict oversight of moving the tortoises from construction sites where they once could be buried alive for a fee. This was called an “incidental take permit” that is no longer given out by the department.  These permits allowed for the entombment of the tortoise that would cause starvation and/or suffocation of the reptile. However barbaric, these permits do not expire and there are “thousands that are still active.”

Brigham Mason, the leasing manager for Lykes Brothers, received 11 adult Gopher tortoises and one hatchling from three different construction sites to be placed on 100 acres set aside as a relocation site. Along with the tortoises was paperwork that documented each creature. Mason checked the paperwork of each tortoise to make sure everything is in order before accepting them.

He explained that the tortoises are “marked with a distinct numbering system” that is kept with FWC, as they are in charge of monitoring the tortoises after they are rehomed on the property. The commission aids in the guidance of land management with each participant property owner to enhance the survival of the tortoises.

“There are four permitted recipient sites on the ranch,” Mason said. “This particular site that we are taking these tortoises to has approximately 6,800 spaces left after we place these 12.”

Mason said Lykes Brothers were permitted to receive more than 8,000 Gopher tortoises on 100 acres of land and the project provides for “long-term protection of the tortoise and their habitat.”

“It is a commitment,” Mason said. “There is a lot of responsibility that goes along with this, but Lykes Brothers—whose Florida family history spans six generations—is sensitive to the environment and understands the importance of protecting the tortoises.”

The agreement is absolute; the project will remain with the property even if it is sold, or handed down to future generations.

The tortoises that were released during The Epoch Times visit were all removed from road and bridge projects located in central Florida, Mason said.

Mason took out a slim shovel, known as a spade shovel, and dug a hole the exact circumference of the tortoise he was placing.

“We give them a little help,” Mason said smiling. “They are not in their exact habitat that they were accustomed to, and the soil may feel different to them, so we give them the idea that this is where home is now.”

After carefully placing each tortoise in their new home, some rejected the hole and begun to investigate other areas of the property; while others liked what Mason had provided and began to dig deeper.  The hatchling was handled differently as the natural instinct to burrow had not “kicked in yet,” Mason said.  It was placed under the thick covering of palmetto bushes to hide it from any flying predators.

Mason pointed to a long line of silt fencing that had been placed during the summer.

“That is 22 miles of silt fencing,” he said, as he took off his cap and wiped sweat from his brow. “We did this in the summertime, in near 100-degree, 100 percent humidity weather.”

The silt fencing is a barrier for the tortoises to let them know “this is as far as you can go,” Mason explained.

With every two tortoises that are placed, Mason gets back into his pick-up truck and keeps moving “down the line” to ensure that there are no more than two per acre, as the rules require.

“These guys can get territorial with each other,” Mason said. “Especially, the males they tend to get–well–macho and want to fight over a space.”

This summer the FWC met with Gopher tortoise experts who told the group that 2020 was the busiest yet for finding recipient sites.

The commission said more than 10,000 tortoises were relocated last year and more than 56,000 tortoises were relocated between 2007 and 2020. There are currently 56 recipient sites statewide, with several more in the process of being approved.  Relocated meaning they were “evicted” from their homes as a result of development and taken to other sites that are licensed to care for these docile reptiles.

But many more are needed and FWC is promoting the Landowner Assistance Program (LAP) to aid tortoises with their assisted-living needs.

“We are hoping we can get more property owners enrolled in this program, which is not only a critical component of Gopher tortoise conservation in Florida, but also provides substantial benefits for landowners.”

Maintaining the legacy of the land is paramount with most private landowners who participate in the LAP program.  Incentives include a partial property tax exemption of up to 50 percent on land under conservation easement, even if it is used for commercial agriculture. Currently, more than half of Florida’s 35 million acres are in private ownership.