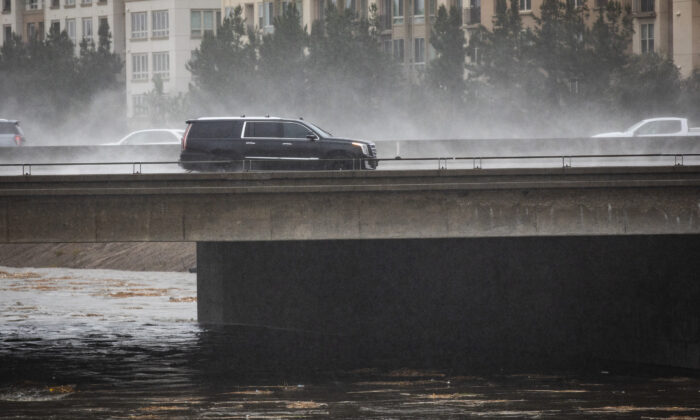 It’s only December, and several major storm systems have already passed through California. These storms are encouraging news in a parched state where multi-year droughts have been declared four times just since 2000. But most of the runoff from these storms quickly ends up in the Pacific Ocean.

In a 2017 study (pdf), the California Public Policy Institute estimated so-called “uncaptured water, river water in excess of the total volume diverted by water users or kept instream for system and ecosystem purposes,” averaged over 11 million acre feet over the preceding twenty years.

Back in the 1950s and 1960s, Californians built the most impressive system for interbasin water transfers on Earth. Each year, millions of acre feet of water are transferred from the Sacramento-San Joaquin and Colorado River watersheds into massive coastal cities: the San Francisco Bay Area, greater Los Angeles, and San Diego. This water is diverted from storage reservoirs via aqueducts to treatment plants in these urban centers, where it is used once, with the wastewater then treated and discharged into the Pacific.

Today, however, this impressive system is no longer enough. Too much uncaptured water still flows uselessly to sea, and too much urban wastewater, imported at great expense, is not reused. And not only does California’s water system require expansion to capture and use storm runoff and wastewater, but the existing system is failing. Aqueducts have subsided and cannot operate at capacity. Dams require seismic upgrades. Just restoring what we’ve got will cost tens of billions.

Instead of investing in new water projects, and maintaining existing water infrastructure, however, California’s state legislature and water agencies have become expert at squeezing every drop out of the aging system built over fifty years ago. Over the past few decades, Californians have made impressive gains in water efficiency. Total water diversions in California for agriculture and cities—roughly 30 million acre feet per year for agriculture and 8 million acre feet per year for cities—have not increased even while California population has grown and irrigated farm acreage has increased.

But to cope with worsening droughts and a diminished Sierra snowpack, as well as new laws that limit ground pumping and increase allocations for ecosystem health, conservation alone cannot guarantee Californians have an adequate supply of water. To address this urgent new reality, the More Water Now campaign has been formed to qualify a ballot initiative to fund water projects in California and to streamline the approval process.

The Water Infrastructure Funding Act (pdf), a proposed ballot initiative that could face voters in November 2022, aims to solve the challenge of water scarcity in California. Voters and policymakers are encouraged to read the fine print in this thoughtfully written initiative. Rather than pick projects for funding, it defines project categories that are eligible for funding. Principal among them are funds for wastewater recycling, storm water runoff capture, aquifer remediation and recharge, off-stream reservoir construction and expansion, and aqueduct repair.

The value of this approach is to ensure that funding from this initiative is consistent with projects already planned by state, regional and local water agencies. In San Jose, for example, it will cost billions to build wastewater recycling plants. But that would be a high priority project under this initiative to receive the necessary funds.

The centerpiece of the proposed initiative is the requirement to set aside two percent of the state general fund—roughly four billion per year—for water projects until five million acre feet of water per year is produced by a combination of new water projects and new conservation programs. It is likely that two million acre feet per year of new water could be supplied through treating and reusing wastewater throughout the state. The initiative also funds programs to recover up to an additional one million acre feet per year through conservation programs. Another two million acre feet of storm runoff could be captured each year in off-stream reservoirs, floodwater wetlands, and underground aquifers.

But this inspiring goal is accompanied by a provision of equal importance: a project category eligible for funding that focuses not only on water quantity, but water quality and water equity. Quoting from the initiative itself, also eligible for funding are “projects designed to increase the clean, safe and affordable supply of water to all Californians with emphasis on California’s disadvantaged communities.”

Another necessary part of this initiative are moderate revisions to the California Environmental Quality Act and the Coastal Act. All the funding in the world will not solve California’s urgent need for more water infrastructure if reasonable time limits aren’t placed on environmental review. And because the initiative leaves the final choice of which projects to approve in the hands of the California Water Commission, it is extremely unlikely a project will go forward unless environmental concerns are adequately addressed.

Californians who are hesitant to support massive public works projects need to understand that taxpayers will foot the bill for water one way or another. If no new water supply infrastructure is built, water scarcity will drive water bills up. Taxes will then be spent on government subsidies to help low income households pay their water bills, as well as to fund rebates for consumers to purchase appliances that consume even less water. Those appliances, even after the rebates, will be costly, and they don’t work very well. Even worse, water scarcity will mean food prices will soar. And without abundant water, it will also be harder to increase the supply of new homes, driving housing prices up.

This economic fact is often lost on critics who oppose government spending of any kind: Socializing the cost of public works, especially to increase the overall water supply, is a tax-neutral proposition that yields a future of abundant water instead of scarce water, enabling broader economic growth and a lower cost of living.

The rains have come back to California. Nobody knows how long they’ll last. But rain or shine, we should not pass up the chance to solve water scarcity forever in the Golden State.