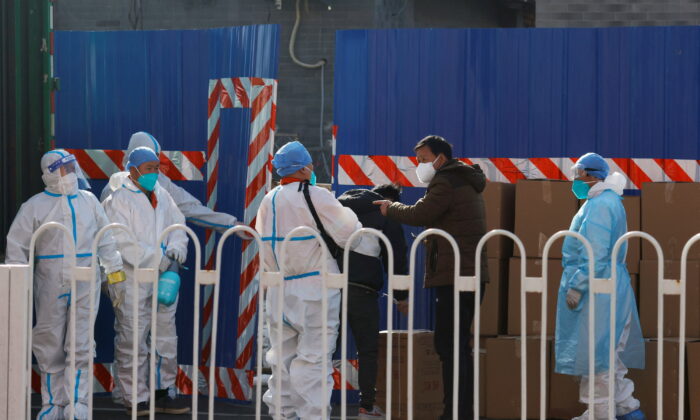 Workers in protective suits stand near boxes outside a sealed-off area following the COVID-19 outbreak in Beijing, China, on March 21, 2022. (Carlos Garcia Rawlins/Reuters)
Thinking About China

What’s really behind Beijing’s “zero-tolerance” COVID-19 policy? Isn’t the pandemic all but over, with the vast majority of variants becoming less lethal and a large percentage of populations either vaccinated or with natural immunity?

If all that’s true—and it is—what’s going on?

Following the so-called “science” behind locking down a city of 9 million people or a whole region of 50 million people after only a relatively small number of non-lethal Omicron cases is absurd.

It was unwise and ineffective two years ago, and it remains so today.

In fact, according to the latest science, lockdowns aren’t a measure to contain a virus. A recent study by Johns Hopkins University shows that “lockdown policies are ill-founded and should be rejected as a pandemic policy instrument.”

The Death Deception of the CCP

But wait, China’s mortality statistics from the disease show that lockdowns do work. Based on Beijing’s calculations, only 4,636 people have died from the CCP virus, compared to over 825,000 official CCP virus deaths in the United States, Forbes reported on Jan. 2.

That’s an unbelievably enormous disparity. And that’s precisely the point. It’s unbelievable, as in not credible, or a complete fabrication by the Chinese Communist Party (CCP).

The actual death toll is much higher, as it should be.

How do we know?

Several reasons. For one, China refuses to disclose its figures of excess mortality with the rest of the world. Extra mortality numbers are how the world determines the impact of a disease.

Another reason is that China’s mortality rate rose above the global average for the prior decade. This was due to China’s aging population. What’s more, its reported non-coronavirus death rate between 2019 and 2021 accelerated six times faster than the preceding decade.

Why would Beijing withhold the actual data? What’s to gain?

It indeed allows the Chinese leaders to claim superiority over all other nations in containing a disease they may have unleashed upon the world.

For example, according to the Forbes report, Beijing claims a CCP virus death rate 30 times lower than Korea’s, 50 times lower than Singapore’s, and 73 times less than New Zealand’s. These nations also locked down, restricted movement, and were highly vaccinated.

Of course, it isn’t, unless no one in mainland China died from the virus after April 2020. That’s when China’s deaths reports ceased.

But according to The Economist, China’s real death rate is underreported by a factor of 17,000. The truth is that China’s case fatality rate (CFR) is actually 4.22 percent, compared to the global CFR of 1.36 percent.

That’s right; China’s death rate from the disease that originated in Wuhan is more than 300 percent higher than the rest of the world.

Given that reality that Beijing is undoubtedly aware of, why lock down entire cities and regions?

As the Johns Hopkins study points out, all lockdowns accomplish is an economic slowdown. In other words, factories in China operate at a lower capacity.

The global economy, which relies on Chinese manufacturers, is negatively impacted in many ways. It starts with supply disruptions. When the flow of products from China slows, nations’ economies reliant upon those products slows down.

General economic slowdowns bring their effects. Companies have fewer products to sell. With lower inventories, there are fewer products to sell, and revenues fall. With falling revenues, employees are let go. At the same time, prices rise because of scarcity, while increasing unemployment puts additional strain on social safety nets.

Hitting Advanced Economies Hard Is an Act of War

From medical equipment to personal protective equipment (PPE), many shortages impacted the world at the beginning of the pandemic, dramatically impacting Western economies. Chip shortages followed and continue to this day, affecting everything from cars to computers and more.

In 2022, China’s “zero-tolerance” policy means shutting down supply chains by closing the country’s busiest port after just one case of Omicron is reported.

The bigger picture is that China has significant veto power over the U.S. economy and is using it. What’s more, the CCP leadership knows or thinks it knows that China can tolerate harsher economic conditions better than the United States.

They may not be wrong. In democratic societies, political pressure—if not unrest—often emerges for improving conditions. That can lead to social divisions, even social polarization, and the rising number of people undergoing economic hardship.

In other words, Beijing’s lockdown policy for what is essentially a much less lethal variant doesn’t make any medical sense. So why do it?

Because it does make sense in a strategic context. As the world’s leader in manufacturing with over 28 percent of global factory productivity, China has the industrialized economies of the West at a critical advantage.

The CCP knows that even with reshoring and nearshoring efforts underway since 2020, the United States can’t make it happen fast enough to offset the devastation of Beijing’s chokehold on products that Western economies need to function and grow.

That’s entirely the point of China’s “zero-tolerance” policy. It isn’t a defensive measure intended to limit the spread of a virus it may have created. Lockdowns are designed and implemented entirely as offensive strikes against the Western nations’ economic viability.

In short, China’s lockdown policy and the virus that gives it political cover are most accurately understood as ongoing and escalating acts of economic warfare against the West, particularly against the United States.