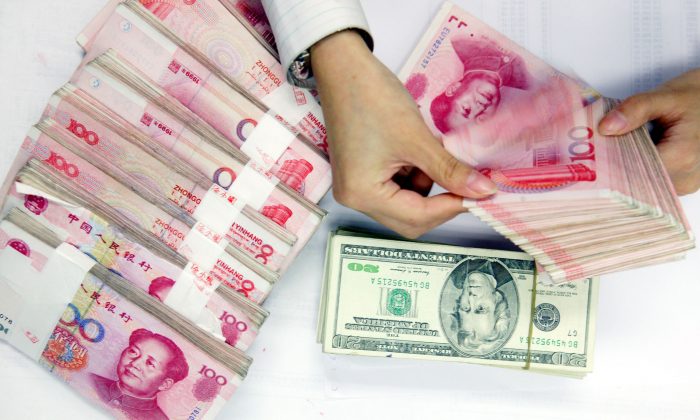 Ever since the devaluation of the yuan in mid-August, the market woke up to the fact that China had to sell parts of its massive pile of foreign exchange reserves to defend the currency from slipping further. The only question was how much?

On Monday morning, Sept. 7, we are a bit smarter as the People’s Bank of China (PBOC) said it reduced the amount of foreign exchange reserves by $94 billion to $3.557 trillion—down $286 billion for the year and $421 billion since the peak in March 2014.

This confirms most estimates of a reduction of $100 billion, but Goldman Sachs said the real number could be higher. “Sales of foreign exchange reserves might have been underestimated by around US$20 billion, given the currency valuation effect,” the company said in a note.

The number is frighteningly large for just one month.

Because of movement in exchange rates during the time period, China could have sold $114 billion but would regained some territory because positions denominated in other currencies rose in value.

Either way, the number is frighteningly large for just one month. If the sales go on like this, we are looking at another $400 billion until the end of the year, with possible side effects for the Western markets.

All things being equal, Treasury bond prices should decline and yields should rise if the Chinese keep selling like this. Citigroup estimates that each $500 billion of 10-year bonds sold should boost yields by about 1 percent.

This is negative for stocks as well, as they are being compared to the so-called risk free rate of Treasury bonds. The higher the rate on Treasurys, the lower the incentive to buy riskier stocks.

While the impact on stocks should be negative either way, some analysts think that the whole situation and instability in China could force investors to buy safer assets such as Treasurys, soaking up all the supply coming from China.

In this type of risk-off scenario it is also likely that the Fed would not lower rates and instead launch another round of quantitative easing. It should also be noted that new Treasury issuance by the federal government has been hardly happening for most of 2015, further taking pressure off bonds.

Most economists agree the yuan is about 15–20 percent overvalued, so the PBOC would have to let it go sooner or later anyway, unless it wants to end up with no reserves at all.

“It’s unsustainable in the long run; the yuan is overvalued by around 15 percent,” Sue Trinh of the Royal Bank of Canada wrote.

The Russian ruble started plunging in 2014 because of economic sanctions and a falling oil price. The Russian central bank spent billions of dollars to stem the slide until it gave up, being around $100 billion poorer. The end result? The ruble still trades just below its all time low of 71 versus the dollar.

In 1992, the Bank of England tried to defend the pound against devaluation by selling 15 billion British pounds worth of foreign reserves in a single day and still got kicked out of the European Rate Mechanism, a precursor of the euro. Needless to say the pound devalued in the process.

It has been proven time and time again that the market is simply much bigger than central banks, even in the case of China.

Jeffrey Snider of Alhambra Investment Partners said: “The outflows have been tremendous. There is no guarantee that this will remain stable, and if conditions worsen, it could grow exponentially into a run.”