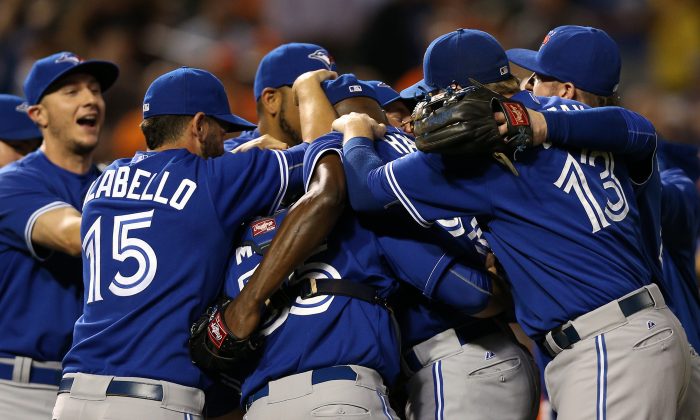 The red-hot Toronto Blue Jays currently are in the driver's seat for the homefield advantage through the playoffs. (Patrick Smith/Getty Images)
Baseball

It’s Official: Blue Jays Are the Team to Beat

Baseball’s postseason is a crapshoot. Any longtime fan of the Fall Classic knows that with all the crazy bounces the ball takes, anything can happen in a single game—or even a single series.

That said, the Toronto Blue Jays look like about as heavy of a favorite to bring home the World Series trophy since the star-studded 2009 Yankees team that beat the Phillies in six.

Here are three reasons why:

Toronto nearly overtook Kansas City in the final month in the lead for home-field advantage, before finishing with a 93–69 record. But even more so, they finished way out in front of everyone else with a plus-221 run scoring differential. The next highest was plus-122 by St. Louis, and there were only two other teams above 100. That’s domination.

In addition, baseball-reference.com gives the Jays a simple-rating-system score (the number of runs per game that they’re better than the average team) of 1.6—twice as high as anyone else. The score takes into account both run differential as well as strength of schedule.

Normally, home-field advantage doesn’t matter much in baseball—but for Toronto it does.

The Rogers Centre—formerly known as the Sky Dome—is a launching pad for home runs, which fits the Jays’ high-powered offense. Josh Donaldson (41), José Bautista (40), and Edwin Encarnación (39), finished third, fifth, and seventh in home runs and the team as a whole hit an MLB-best 232 on the year.

The extreme opposite of that would be the Central-division-winning Royals—possible ALCS foes—who were 24th with 139.

In addition, the brand new turf there (AstroTurf 3D Xtreme, installed this past offseason) is different than what most teams have—and most teams don’t seem to be fond of it. Complaints by the Orioles, Yankees, and Royals about the slow, spongy surface that induces bad hops all over have made headlines—but no changes.

Naturally, since the Blue Jays are used to it, it’s not an issue for them. That’s an advantage.

Toronto was actually a game below .500 on July 28 (50–51) when they traded José Reyes for Troy Tulowitzki, to upgrade both the offense and defense. Having Tulowitzki lead off with leading MVP candidate Donaldson in the two-spot was too much for opposing pitching, and since then Toronto is 43–18.

But that’s just one of the reasons they’re hot.

Two days after that deal, they pulled the trigger on another major deal when they acquired Cy Young winner David Price from the Tigers to give them the ace they need. Price is 9–1 in 11 starts with a sparkling 2.30 ERA since then. In addition, Price and the whole staff has benefited from the defense of center fielder Kevin Pillar—a clear Gold Glove contender at the second-most difficult position.

The personnel moves were all made with a clear nod to the value of team chemistry. In addition to those two big midseason trades, the Blue Jays signed catcher Russell Martin and traded for Donaldson in the offseason to add talent as well as leaders. The result has been the best team in the league.

All they’re missing is the World Series trophy to prove it.