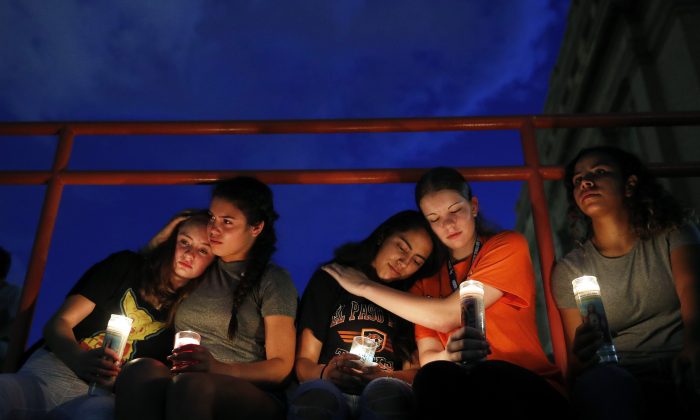 People comfort each other during a vigil for victims of the mass shooting in El Paso, Texas, on Aug. 3, 2019. (AP Photo/John Locher)
Viewpoints

It’s Long Past Time for National Discussion About Mental Illness

After two horrific mass shooting incidents last weekend, the United States is once again locked into the same frustrating routine that follows such tragedies.

Many Democratic politicians running for president immediately began using the incidents in their fundraising, calling for gun bans and more gun control laws, such as bringing back the lapsed “assault weapons ban.”

President Donald Trump took a far different approach when he stated that it’s time to begin grappling with mental health reform, and I think he’s right.

Trump outlined five steps he intends to take in response to these latest mass slayings.

Trump acknowledged some of these proposed steps will be very hard to achieve, such as the second one, which calls for a cultural change. Trump himself said:

“Cultural change is hard. But each of us can choose to build a culture that celebrates the inherent worth and dignity of every human life. That’s what we have to do.”

The third step will also be a very uphill battle. That’s because we haven’t had a realistic program for dealing with the mentally ill in this country for a very long time.

And besides the mass shooting incidents, the ever-increasing problem of mentally ill homeless people on our streets demonstrates how the U.S. government, at the local, state, and federal levels, have failed the mentally ill among us.

I have been saying for years now, there needs to be a real national discussion about mental illness, and I’m encouraged that the president is willing to play a role in helping to start this discussion.

However, I noticed there was immediate and very strong pushback from people on social media to the president’s proposal to institute new “red flag” laws.

It’s very understandable that many people who don’t trust the government to do anything right are made extremely uneasy when a discussion about mental health reform begins.

Objections to mental health reform often seem to be raised by those who fear they will end up having the apparatus of the State turned on them. These people are afraid that those who decide what is and what is not mental illness will turn any new mental health laws into a weapon they will use on their political opponents.

It’s indeed true that in the old Soviet Union, perfectly sane people were imprisoned in mental hospitals for publicly expressing beliefs that contravened accepted Soviet doctrine. This happened to many Christians, who were confined while doctors attempted to “cure” them of their supposedly absurd belief in God.

But is the United States in any real danger of becoming the Soviet Union 2.0? Is paranoia that one day, someday, people might abuse red flag laws to lock up innocent people a reason to continue doing what we’ve been doing, which clearly isn’t working? I don’t think so.

It’s simply not an option to maintain the status quo of allowing clearly disturbed people to roam around free on our streets or even in our schools just because some people are paranoid that they’ll wake up someday in the future and the United States will have morphed into the Soviet Union 2.0.

When Your System Fails, Blame the NRA!

In his remarks on Aug. 5, the president mentioned the tragic Parkland school shooting that occurred in February 2o18 as an example of how current systems fail to detect and act on early warning signs:

“As an example, the monster in the Parkland high school in Florida had many red flags against him. And yet nobody took decisive action. Nobody did anything. Why not?”

That shooting was carried out by a person for whom the police had been called to come to deal with his increasingly violent and irrational behavior at least 39 times.

And yet, on the day he carried out this massacre at Marjory Stoneman Douglas High School, this person was still allowed to come onto the campus.

Andrew Pollack, whose daughter Meadow was one of the many victims that awful day, has a new book coming out soon, in which he lays out in awful detail why Parkland was the most avoidable mass murder ever. And if you’ve studied the facts of this case, it’s hard to argue with him about that.

“Why Meadow Died” is an in-depth look at the incompetent and ineffective school safety policies that ended up being completely unable to keep a truly dangerous person separated from the other students.

If your school safety policies fail to keep kids safe, then all the rest of your bright ideas aren’t worth much, since you’ve failed at your main job.

And in the aftermath of Parkland, none of the people who played a direct hand in creating that dysfunctional school safety system in Broward County would take any responsibility for what they allowed to happen. Instead, the authorities in Broward were too busy offering up scapegoats to take their place.

And the chief poster boy for that is Broward Country Sheriff Scott Israel, who took the opportunity of that now-infamous CNN town hall to stridently deny any responsibility.

The entire country got to watch the former sheriff relentlessly shift the focus off himself and his department by stubbornly insisting the massacre was the fault of Dana Loesch and the National Rifle Association (NRA).

Instead of blaming the people that put ineffective policies in place that resulted in a failing system that ended up being unable to keep a dangerous person out of the school, the audience was encouraged to engage in a “Two Minutes Hate” against the NRA as if straight out of George Orwell’s “1984.”

It’s far past time for public officials who can’t protect the public from dangerous people to quit being allowed to proffer the NRA and guns as substitute targets instead of their own incompetence and failed policies in addressing and dealing with mentally ill people who are clearly already violent or threatening to become so.

In the wake of the El Paso and Dayton tragedies, CNN now wants to hold another town hall, which was scheduled to air on Aug. 7.

Much to Jake Tapper’s surprise, it appears that no Republican, conservative, or NRA supporter will agree to appear at this CNN town hall to play the role of the designated villains this time.

Imagine my shock at that.