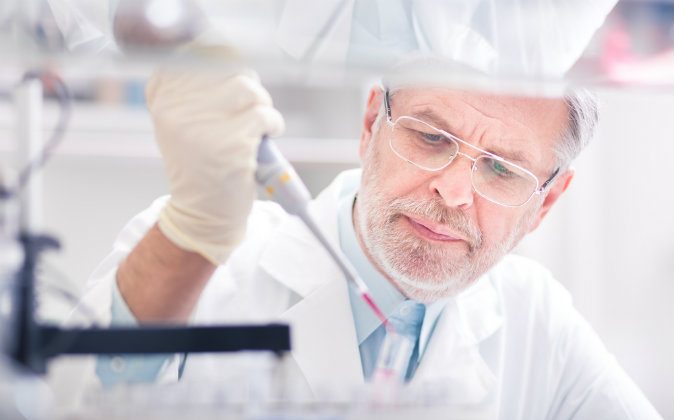 File photo of a life scientist. Fruit and vegetable varieties created through mutagenesis, the forced mutation of plant DNA, are considered GMOs in some places, but organic in others. (Shutterstock*)
Environment

It’s Labeled Organic, But Its Genes Were Scrambled With Gamma Rays

Altering the genetic makeup of plants with gamma radiation or chemicals is considered a traditional breeding technique in the United States.

It is not mandatory to test the possible adverse health or environmental effects of this technique, known as mutagenesis. It is allowed to use mutagenesis-derived crops in organic agriculture.

Canadians, however, see the matter differently. In Canada, organisms shaped by mutagenesis are genetically modified organisms (GMOs) by law. In Europe, mutagenesis cannot be used in organic farming, but neither are new varieties created with this method considered GMOs.

Mutagenesis occurs when chemical, physical, or radiation stress is applied to a cell to scramble its genetic makeup and force mutation. It mimics natural mutations caused by solar radiation and some of the chemicals used in the practice are natural. For example, natural mutagens are derived from Vinca alkaloids found in the Periwinkle plant.

The list of chemicals used to brake and scramble DNA is ever-expanding. It includes benzene, a known carcinogen, according to the American Cancer Society—though the cancer studies on benzene relate to people exposed directly to the chemical for long periods of time. It also includes bromine, ethylnitrosourea, psoralen, and other substances.

Although cells will end up scrambled or partly “frozen” genetically, they will not contain recombinant DNA (DNA recombined in a laboratory) after mutagenesis. For this reason, and because the practice has been in use since the 1940s, mutagenesis is considered a traditional breeding technique and safe enough for unregulated and unlabeled public release in America.

Without the costly and time-consuming GMO regulatory requirements or battles, mutagenesis could increasingly become the favored method worldwide for large breeding companies, such as Monsanto and BASF.

Mutagenesis could save Monsanto years of waiting and the $150 million to $200 million it spends to launch a single genetically engineered variety. Mutant breeds are much cheaper to launch, according to the United Nations’ Nuclear Techniques in Food and Agriculture program. Japan invested $69 million in mutant breeds over a 40-year period with a yield of $62 billion. These cost estimates were cited by Bloomberg Businessweek.

Mutagenesis, however, may cause more changes to a plant’s genetic makeup than regular biotechnology, according to a 2008 study by R. Batista and a team of researchers; the study was presented at proceedings of the National Academy of Science.

Industrial, and even organic, breeding programs use biotechnology techniques, such as selecting plant traits using molecular markers. The dividing line between the biotechnology of the last century and traditional breeding techniques dating back centuries and millennia is becoming increasingly blurred.

Another perspective is drawing the dividing line between traditional and new breeding methods. Professor of organic plant breeding at Wageningen University and Research Centre in the Netherlands Edith Lammerts van Bueren coined the concept of plant integrity and intrinsic value represented by an intact genome.

This concept could be used as a new means to differentiate between techniques that maintain plant integrity those that do not.

*Image of life scientist via Shutterstock