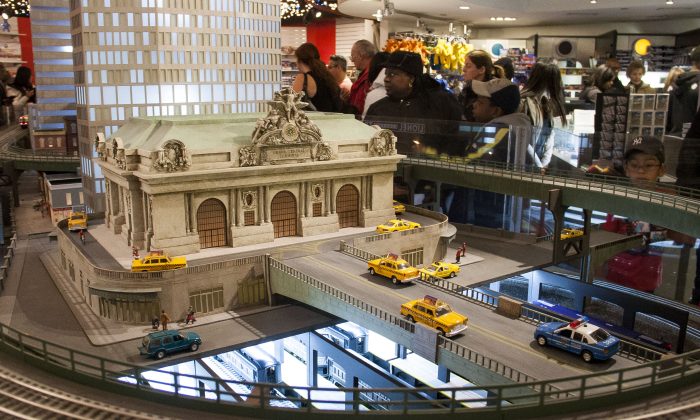 NEW YORK—Their faces plastered to the clear screen, two boys exclaimed in excitement as a toy train marked with the Yankees and Mets logo sped by.

Silvina Sterin’s two sons are big fans of baseball—they just finished playing a season with the Yorkville Baseball League. And they love to look for small details.

Sterin brought her sons to the holiday train show at the New York Transit Museum in Grand Central Terminal after searching on the Internet “for something interesting indoors,” Sterin said, as a reprieve from the cold weather.

Now in its 13th year, the annual train display draws about 60,000 people to visit the museum, according to Gail Goldberg, the senior manager of retail operations and product development at the museum.

The train show is part of a rotating lineup of exhibits there. “This one is the favorite,” Goldberg said. Last year, one mother brought her child to see the show every day. “The kid would jump up and down each time the train went by,” Goldberg recalled.

Aside from children, the show is also popular with tourists and train collectors. The display, which includes New York City skyscrapers, a train depot, and everyday scenes of urban life, is constructed by Lionel Trains, the model train designer company.

Isaac Tyran, who brought his seven-year-old daughter and 11-year-old son to see the train display for the first time on Sunday, said he found the replica of King Kong hanging off the Empire State Building a nice touch. “I’m impressed by the tradition, and how they’ve managed to keep it fresh all these years,” he said. “It’s practically full house in here.”

He hopes to bring his children to the show each year so it can become a part of his family’s holiday tradition.

Goldberg said many people do visit every year. To make the exhibit appealing for the frequent visitors, new elements are added to the display every couple of years, or the trains would get replaced.

Two-year-old Peter was entranced by the lines upon lines of train replicas on the walls of the museum, was unwilling to peel his eyes away. “He really loves trains, especially Thomas the Tank Engine,” said Neill Johnson, Peter’s grandfather. For Peter’s second birthday, his cake had a model of the cartoon’s iconic character on top, and his friends all got train engineer caps.

Peter gets even more excited when he sees real trains. Johnson said he sometimes brings his grandson to an overpass at 96th St. where subway trains can be seen going underground.

“One time, a big diesel train was running. The bridge was shaking and the horn was beeping really loud. He got so excited,” Johnson said.