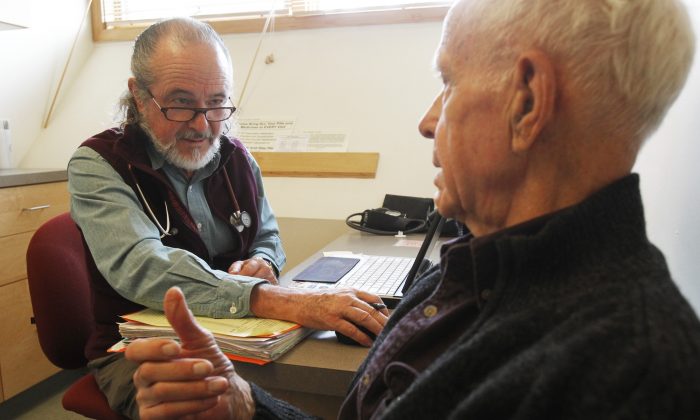 It’s Hard Out There for a Doctor

America’s doctor shortage is quickly becoming a crisis. No less than 14 states have introduced legislation or created new programs to deal with the problem.

The Association of American Medical Colleges reports that the country is currently short 20,000 doctors. Over the next decade, that number could quintuple.

And “Obamacare” is only making things worse. Physicians are responding to the health reform law’s intrusive regulations and insufficient payments by treating fewer patients—or even abandoning the medical profession altogether.

One cornerstone of “Obamacare” is its expansion of Medicaid, the jointly run federal-state health insurance program for the poor.

Starting in 2014, the program will cover all Americans with incomes up to 133 percent of the federal poverty level. The federal government will absorb 100 percent of the cost of this expansion through 2016, and then a declining share in subsequent years, until the its responsibility rests at 90 percent in 2020. By then, some 12 million people will have gained coverage anew through Medicaid.

But the program is already dysfunctional. Reimbursement rates are so low—about 60 percent of the rate paid by private insurers—that doctors routinely refuse to see Medicaid patients. A recent study published in Health Affairs found that 33 percent of doctors did not accept new Medicaid patients in 2010 and 2011.

By throwing millions more people into the program without raising Medicaid payment rates, “Obamacare” will make it even harder for patients covered by the program to secure care.

The story is much the same for the government’s other big health program—Medicare. More than 9,500 doctors opted out of treating Medicare patients in 2012. That’s almost triple the number that abandoned Medicare in 2009.

According to American Medical Association President Dr. Ardis Hoven, “While Medicare physician payment rates have remained flat since 2001, practice costs have increased by more than 20 percent due to inflation, leaving physicians with a huge gap between what Medicare pays and what it costs to care for seniors.”

Unsurprisingly, “Obamacare” will exacerbate the problem. The law creates a new government entity—the Independent Payment Advisory Board (IPAB)—charged with ensuring that Medicare hits designated spending targets. IPAB is forbidden from rationing care or changing seniors’ benefits. So the board’s only real cost-cutting option will be to ratchet down reimbursement rates for doctors.

“Obamacare” will also reduce payments to doctors who do not adhere to the law’s Byzantine new regulations. For instance, doctors who fail to comply with the Centers for Medicare and Medicaid Services’ Physician Quality Reporting System or order a certain number of prescriptions electronically could see their reimbursements docked up to 7 percent by 2017.

In many cases, doctors will have to make substantial investments in their office infrastructure and computer systems just to follow all the new rules.

Many doctors—particularly those nearing the end of their careers—will simply hang up their scrubs instead of spending heavily to comply with “Obamacare.” According to Dr. Jeff Cain, president of the American Academy of Family Physicians, “Almost a third of family doctors in rural America are thinking about retiring in the next five years.”

A 2013 Deloitte survey of physicians found that 6 in 10 doctors believe that many in their profession “will retire earlier than planned in the next one to three years.”

Those who can’t afford to retire may look to partner with hospitals in order to offload increases in overhead fueled by “Obamacare.” That’s bad news for physicians, hospitals, and patients alike.

American Enterprise Institute senior fellow Dr. Scott Gottlieb predicts that doctors will work less, once they become salaried employees of hospitals. Their employers will respond by reducing their paychecks. And patients will find that they’re competing for an ever-scarcer number of appointments.

“Obamacare” is causing a doctor depression. And what’s bad for doctors is ultimately bad for patients. The cure for this sickness is full repeal of “Obamacare”—and the installation of market-based reforms in its place.

Sally C. Pipes is president, CEO, and Taube Fellow in Health Care Studies at the Pacific Research Institute. Her latest book is “The Cure for Obamacare” (Encounter 2013).