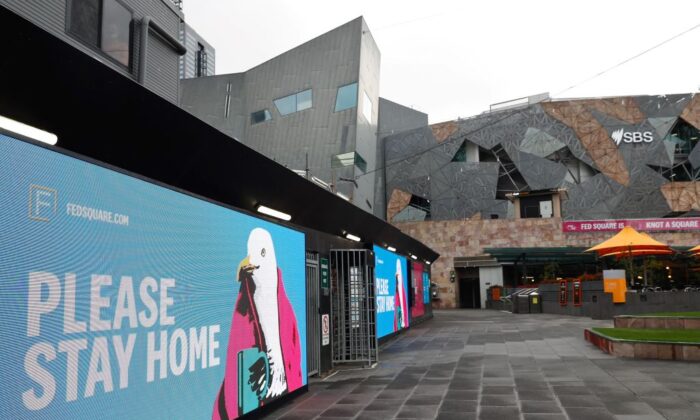 Signage for people to stay home is seen at Federation Square in downtown Melbourne, Australia, on August 6, 2021, (Con Chronis/AFP via Getty Images)
Australia

Melbourne is a "broken place"
By Henry Jom

Victoria’s economy has lost over $700 million (US$508 million) per week since the start of the lockdown, with business and consumer confidence levels bottoming out.

This comes as Melbourne claims the world record for the longest locked down city in the world, overtaking Argentinian capital Buenos Aires for the number of days under government-mandated lockdown.

“We are going to get past this,” Victorian Premier Daniel Andrews told reporters on Oct. 3.

“We are going to end this lockdown and open up, and all that we will enjoy then will be a result of all that we have given.”

But the premier’s sentiments were not shared by the CEO of Australian Industry Group, Innes Willox, who said Victorians feared the sixth lockdown would not end after the three weeks promised by the premier.

“Melbourne is pretty much a broken place, and 246 days of lockdown would do that to you—that’s eight months of lockdown in 18 months,” Willox told Sky News Australia.

“The economic devastation is huge—its emotional devastation, it’s impacted our education, our economy, and Melbourne’s resilience—it’s been very tough and will continue to be tough.”

Former Victorian Premier Jeff Kennett also criticised the lockdowns saying the city’s longest lockdown title was “nothing to be proud of.”

“[T]here’s a massive loss of trust in the leadership of Victoria,” Kennett told the Herald Sun newspaper.

“What it represents is a great deal of inconvenience, hardship, loss of industry, businesses and major events,” he said.

According to the state government’s statistics, Victoria’s tourism economy experienced a significant decline of 50 percent, or a loss of $12.7 billion, in the year to June 2021 compared to the previous year.

Meanwhile, total visitors to and within Victoria decreased by 33 percent to 53.7 million from the year ending June 2020, compared to the previous year—representing a loss of 26.7 million visitors.

“Melbourne’s lost all of the attributes that made it strong, events-strong culture, the education sector was so important to Victoria,” Willox told the Today show.

“Events are really the core part of Melbourne,” he said.

“Those sorts of things that are really important to Melbourne’s status and sense of well-being, and we’ve lost two grand finals.”

On Sept. 30, the Victorian government and the federal treasurer announced a $2.27 billion support package for businesses most affected by restrictions as Victoria worked to increase the vaccination rate to cover 70 and 80 percent of the state population. A move that aligns with the national plan agreed to by the intergovernmental National Cabinet body comprised of the prime minister, along with the state and territory leaders.

“Our economy has bounced back strongly before once restrictions are eased and is well-positioned to do so again when lockdowns lift,” Federal Treasurer Josh Frydenberg said in a statement.

According to Victoria’s roadmap, Melbourne’s lockdown is due to end on Oct. 26 when 70 percent of residents are fully vaccinated—however only fully vaccinated Victorians will enjoy more freedom.

Victoria will also be able to keep up with the national plan’s 80 percent threshold only until Nov. 19, which is supposed to see more freedoms released.

“People are at their wit’s end. They want their kids back at school; they want businesses to reopen,” Frydenberg said.

“They are getting the jab in record numbers because they believe that’s the part of the compact they have with their governments—that when they get the jab, the restrictions will ease.”

“Locking down is a health decision but has an economic consequence (but) we know that not tackling the virus is a worse outcome,” Masters said.

Meanwhile, protesters took to the streets of Melbourne on Oct. 2 following an announcement by the Victorian Premier Daniel Andrews that vaccination would be mandated for “authorised workers.”

On Oct. 4, Victoria recorded 1,377 new cases, with 82 percent of Victorians over 16 having received their first vaccine dose and 52.1 percent being fully vaccinated with two doses.