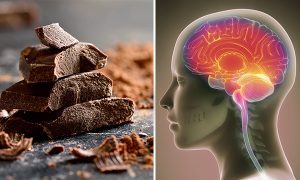 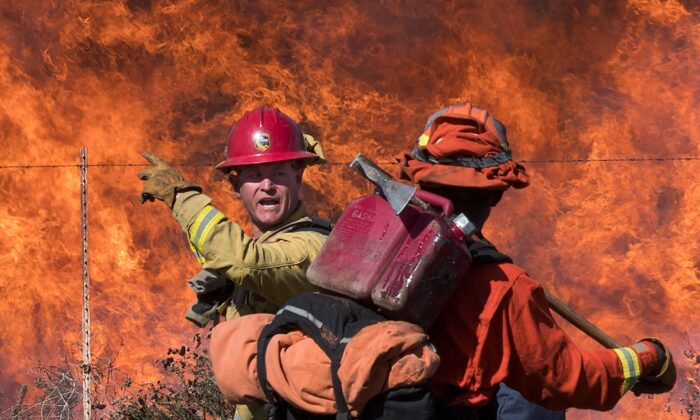 A firefighter (L) speaks to an inmate firefighter as they prepare to put out flames on the road leading to the Reagan Library during the Easy Fire in Simi Valley, Calif. on Oct. 30, 2019. (Mark Ralston/AFP via Getty Images)
US News

As thousands of Sonoma County residents drove south last weekend, away from the Kincade fire, a team of researchers headed north toward the flames. About a mile from the inferno, they stopped to set up their equipment. In the distance, the fire glowed and leaped into the night sky.

California is, once again, ablaze. The Kincade fire has burned almost 77,000 acres and was 60% contained as of early Oct. 31. To the south, near Los Angeles, the Easy Fire scorched at least 1,500 acres, threatening thousands of homes and the Ronald Reagan Presidential Library. Nearby, some 7,000 people were evacuated because of the Getty Fire, which had destroyed 745 acres by Oct. 31.

Wildfires now burn five times more acreage in California than they did in 1970, according to research published in March. Scientists have previously attributed more than half of that increase to climate change-related dryness. Studying wildfires to further advance our understanding of them poses an obvious problem, however: How do you measure something you can’t get too close to?

Clement and his team are the only meteorological researchers in the U.S. certified as firefighters. They use a combination of radar and lidar to gather information at multiple wavelengths, beyond the limits of human eyesight. The truck-mounted instruments can take in data from an ash cloud overhead or flames rising above the treeline a safe distance off.

Over the last 15 years, scientists have worked on computer simulations of how fire and air interact, but they need observations from actual events, or “prescribed fires” (controlled burns), to constrain the models and help them develop useful predictive power.

Clements is trying to improve forecasting, and in doing so better arm firefighters and save lives with the data collected. Ultimately, understanding fire better could inform everything from home development patterns to insurance rates. Here are the questions he wants answered next:

Where Do Embers Go?

Unlike the ones in your fireplace, these glowing bits of carbon-based material can travel a mile from the main fire and spark a new front—and they often do. “We don’t know how to predict where embers are going to fall, and how many will ignite,” Clements said. “Now, we’re trying to measure that in the field.”

How Does Wildfire Spread?

Scientists once believed wildfires propelled themselves forward as heat enveloped the surrounding area, raising temperatures to ignition. But heating alone isn’t powerful enough to explain the conflagrations scientists have studied. Now, researchers like Clements are focusing on how the flame itself ignites trees and vegetation, once the surrounding area has already been subsumed by heat. In California’s wind-driven fires, rushing air pushes the flames into the next batch of fuel.

How Does Terrain Affect Blazes?

Hot air rises, which is a problem when the slope of a canyon is burning and there’s nothing but sun-dried trees all the way to the top. But scientists say they still need to know more. “We need to understand how fires spread up big canyons and up slopes,” Clements said. “It has been done in the lab and has been done in computer simulations, but we have not done it successfully in the field.” He hopes to field test this situation in Spain in the coming years.

How Do Fire Plumes Work?

The current California fires are fed by winds, which makes predicting where they’ll go next a lot easier. Stationary fires, however, emit plumes of smoke that can form ash clouds in the upper atmosphere. These tall, rotating columns bedevil scientists studying their physics, since temperatures fluctuate throughout them. Clements gained some insight in 2016, when a research plane flew through a fire plume above Idaho’s Clear Creek Canyon to determine what was going on inside. The nerve-wracking flight, chronicled by High Country News, left researchers with a cross-section that Clements called, “the most exciting thing I think I’ve ever seen in my career.”

What’s In the Cloud?

Ash, soot, and smoke from wildfires can affect people’s lives and health far from the fire itself. Eventually, Clements hopes the data will inform public-health researchers about how fires may affect air quality for downwind communities. During last fall’s wildfire season, California air reached pollution levels 60 times higher than global health standards. Knowing how much ash a cloud can hold would help inform neighbors what may be coming their way.

Western fires are raising the profile of Clements’s work and drawing attention to these and other research needs. San Jose State University announced earlier this month it’s hiring five additional tenure-track positions to the fire-weather laboratory.

“It’s the largest wildfire cluster hire, I think, on the planet,” he said.