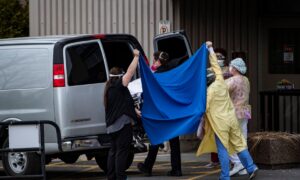 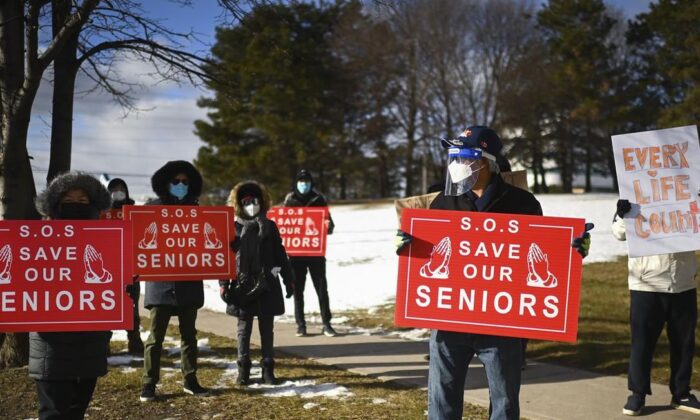 TORONTO—Residents of Ontario’s long-term care homes begged on Tuesday to be allowed outside, saying anti-pandemic restrictions that have confined them indoors for more than a year make no sense given almost all have now been vaccinated.

Some compared their situations to solitary confinement, and urged the provincial government to act on what they called a gross violation of their basic human rights.

Chuck Ferkranus, a resident of a home in Newmarket, Ont., said no one in the building has COVID-19 and yet residents are stuck in their rooms. Ferkranus, who challenged those in authority to live as he does for even a week, said residents are being treated worse than criminals.

“We did nothing wrong; we’re not guilty of any crime,” he said. “If vaccinations don’t end the rules, if no one having COVID doesn’t end the restrictions, then what does it take before this comes to an end?”

Many of an estimated 150,000 nursing home residents have been confined to their rooms or floors for as long as 15 months now, cut off from most relatives as well as the outdoors. Activists blame extreme staffing shortages and operators who prioritize corporate needs ahead of the welfare of residents.

They also point to evidence that extreme isolation is physically and mentally damaging, especially to residents of nursing homes, many of whom suffer cognitive difficulties and need familiar faces and touch.

“It just cannot go on like this; people are really suffering,” said Natalie Mehra, executive director of the Ontario Health Coalition. “We’re furious and we’re heartbroken.”

Alfred Borg, another resident in Newmarket, said he hasn’t been allowed outside for more than a year or even had a shower for five or six months. Instead, he said, residents only get in-room sponge baths when even the law guarantees twice a week baths or showers.

“All day long we just sit in our room,” Borg said. “Why are we being treated so much differently from everyone else? It is not enough just being alive. We need a better quality of life.”

Dr. Amit Arya, a palliative care physician in long-term care, said quality of life is crucial and infection control can’t be allowed to trump all. The restrictions, he said, cannot be justified in light of the “profound harm” social isolation and loneliness can cause seniors.

Jane Meadus, a lawyer, called the restrictions a violation of human rights. While anti-pandemic measures loosen in the rest of society, she said, seniors continue to suffer.

“All along, these detentions have been illegal,” Meadus said.

Premier Doug Ford and his ministers have not responded to letters Meadus wrote last month calling for a ban on such confinement, she said.

At a news conference on Tuesday, Ford expressed some sympathy but gave no indication he would act on the concerns.

“I fully understand—my mother-in-law’s in there,” Ford said. “But we have to be super cautious.”

Health Minister Christine Elliott Elliott confirmed more than 90 percent of long-term care residents have been fully vaccinated but did not address the confinement issue.

Michelle Morriseau said the only time in a year her mom was allowed out of her nursing home in Thunder Bay, Ont., was for four hours recently to attend her husband’s funeral.

“She got to come out for a funeral, and when she returned to the home, she was put in (nine-day) isolation,” a distraught Morriseau said. “My mom is so different when she’s outside. She’s bright, she’s alert.”

In some cases, activists said homes had called police to enforce the lockdown even though they have no authority to do so.