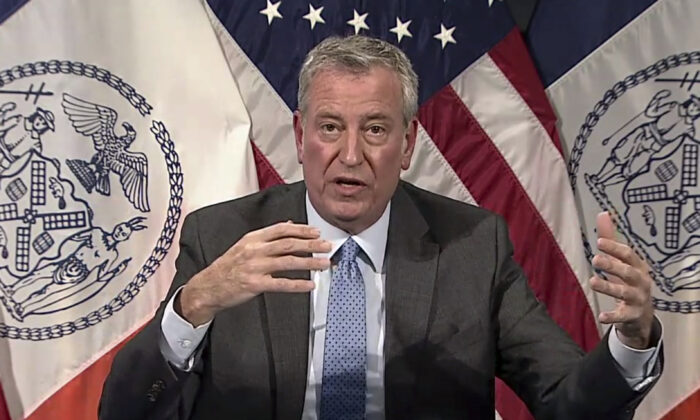 It’s Bad Out There and Getting Worse

Back in the early days of talk radio, the late Bob Grant used to have a tagline: “It’s sick out there and getting sicker.”

The pugnacious New York City host, who ruled the local airwaves on WABC in the ’80s and early ’90s, came to fame during the previous nadir in the city’s fortunes, the David Dinkins administration of 1990–93. Crime was out of control, murders were at record highs (2,605 in 1990), and there seemed no way out of the sealed box that decades of Democratic administrations had constructed for the city.

Then came the Rudy Giuliani administration (1994–2001) and things changed almost overnight. New police Chief Bill Bratton cracked down on so-called lifestyle crime, such as the city’s omnipresent squeegee men—intimidating derelicts who “cleaned” car windshields with filthy rags for a mere quarter—and subway turnstile jumpers. By 1995, murders had fallen to 1,550 and by 2001, they had plummeted to 960. All that was required was political willpower.

That’s in short supply these days, as America under the Biden administration lurches from crisis to crisis, many of them of its own making, whether willfully or accidentally. In less than a year, U.S. energy independence—along with its kissing cousin, low gas prices—has vanished, putting the country back in the clutches of OPEC.

By many measures, communist China has surpassed the United States militarily, building fleets of aircraft carriers and boldly testing hypersonic missiles while American brass boasts of “inclusivity” and frets about pronouns.

Given the parlous state of the U.S. Navy—the branch of service most corrupted by wokeness—China could likely take Taiwan easily. And it will, the moment it feels sure that the Americans won’t defend the island nation.

Historically, the Chinese have failed abysmally in armed conflicts with non-Chinese forces, from the battle of Talas in 751, in which an Arab Muslim army handily beat them, permanently ending Chinese expansionism to the west; to their twin defeats by Japan in 1931 and 1937. But as the Taiping Rebellion of 1850–64 and Mao’s Cultural Revolution of 1966–76 demonstrates, they are hell on each other in civil conflicts, which means the conquest of Taiwan will be especially bloody.

Meanwhile, in Europe, the Russians are bellying up to the Ukraine border, ready to restore the status quo of 1793, and there can be little doubt that Putin, a student of Russian history who maintains himself in power by explicitly appealing to the glory days of the Russian empire, means to take at least the eastern half of that unfortunate country whenever the time is right. And what will we do about it? Nothing: NATO will be exposed as a paper tiger led by overfed functionaries and brass-ring chasers.

On the domestic front, COVID-19 and its infinite number of variants continue to frighten and provide a convenient excuse for government bureaucrats to arbitrarily impose mask mandates and lockdowns as they continue their Sisyphean task of trying to stop a virus dead in its tracks by destroying our economy, ruining our culture, shredding the Bill of Rights, and destroying as many productive lives as possible.

De Blasio’s “order” was met with immediate opposition from the city’s business community.

“We were blindsided,” said Kathryn Wylde, head of the pro-business group Partnership for NYC. “It’s unclear by what authority the mayor is doing this.” The incoming mayor, Eric Adams, said he will “evaluate this mandate and other COVID strategies” once in office next month.

Ah, but orders and mandates are now the principal governing tools of our elected officials. Thanks to the dreaded COVID-19, all previous norms have been suspended in the interests of “safety,” despite the manifest non-threat the CCP virus and its offspring actually pose to the population at large.

Indeed, society-wide, there’s been both an abdication of lawful authority and a power grab by unscrupulous leftist pols such as de Blasio to rush into the moral vacuum created by both government and media to rob you of your income, your livelihood, and your rights, all in the neurotic name of “health.”

And not just government. Private businesses have also used the COVID-19 excuse to cut back on services and raise prices, both of which give rise to the soaring inflation that is now a hallmark of the Biden administration.

Pretending that COVID-19 is the modern equivalent of the Black Death, airlines now treat their passengers with the fascistic contempt they’ve been longing to do since the arrival of deregulation and the oppressive carbuncle called the Transportation Safety Administration—one of the gifts of George W. Bush after the panic of 9/11. The boarding process, to coin a phrase, is the punishment.

And how quickly we all became inured, like sheep, to the notion that every American is a potential terrorist and should therefore be treated like a criminal suspect for the simple act of traveling. At the same time, roving gangs of persons the media euphemistically calls “juveniles”—real criminals—loot high-end business in California and elsewhere with literal impunity, while brazen restaurant robberies, carjackings, and home invasions are all on the rise.

The Trump interregnum between eight years of Obama and four (?) years of Brandon gave us full employment, a strong economy, plentiful oil and gas, low inflation, a sturdy stock and real estate market, and a stable society that wasn’t always at each other’s throats.

That’s all gone now, replaced by soaring crime rates, domestic totalitarianism, international instability, and a continuing, manufactured, and media-whipped hysteria over the “pandemic” as we enter the “dark winter” that candidate Biden promised and is steadily delivering on.

In short, it’s bad out there and getting worse. So what are you going to do about it?