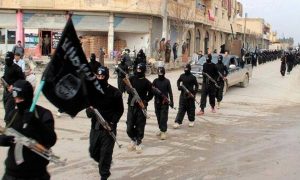 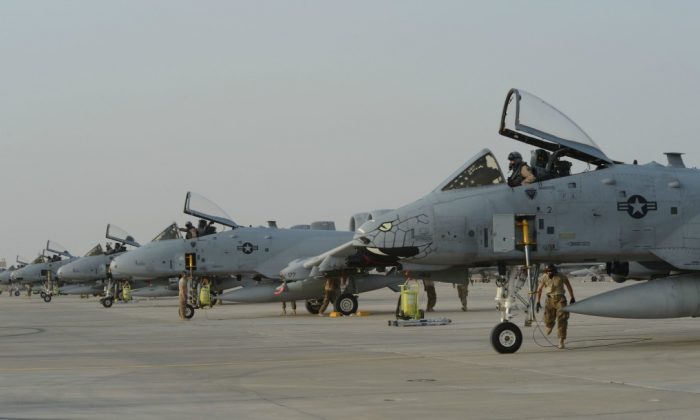 U.S. ARMED FORCES, Southwest Asia—It’s dinnertime at the DFAC (the military acronym for chow hall) at this remote desert base somewhere in the Persian Gulf region. As they eat, a group of four U.S. Air Force A-10 pilots talk about their war against Daesh, which is what the U.S. military and its coalition partners call ISIS, or Islamic State.

Even with their close-cropped hair and tan flight suits, there’s nothing outwardly remarkable about the pilots. They might pass for any other Americans in their late 20s and early 30s. They smile a lot as they talk and casually tease each other based on inside jokes accumulated after living and working together 24/7 for about five months. Most have families and children back home. They have the normal complaints for deployed troops, including restrictions on mustache size, which is a major topic of conversation. Dinner at a U.S. military chow hall in 1944 probably wouldn’t be very different from this one.

As the pilots talk, they use all the familiar lingo and clichéd expressions common to military aviation. But among the typical lexicon there’s another word they use a lot, which seems to stand out from the rest: “hunting.”

I’m doing stuff here that I never thought I’d get to do. We’re hunting. And there are very few sorties when you’re not shooting.
— U.S. Air Force major pilot

“I’m doing stuff here that I never thought I’d get to do,” one pilot, an Air Force major said. “We’re hunting. And there are very few sorties when you’re not shooting.”

Many U.S. military pilots and other personnel have chosen not to reveal their identities due to security concerns. Mainly, they’re concerned about domestic ISIS sleeper cells retaliating on their families back in the United States—a threat they consider deadly serious.

The pilots say their mindset flying against ISIS is different from the one they had in Afghanistan, a theater in which most of these pilots have also flown in combat. In Afghanistan, they say, they had a defensive mindset; the priority was to defend U.S. troops on the ground with close air support. In the war on Daesh over Iraq and Syria, however, they describe their mindset as offensive. In addition to close air support and bombing missions, they also fly air interdiction missions in which they patrol for targets of opportunity—essentially hunting for ISIS militants to kill. And they kill a lot. Sometimes one pilot will kill dozens of ISIS fighters in one sortie.

Each pilot flies every one to three days, racking up about 100 combat hours a month. Due to the large airspace they patrol, the sorties are long, sometimes lasting about eight hours. The pilots prepare their bodies to endure the physical demands of long missions in a single-seat attack aircraft with massages and special workout programs.

“We’re like professional athletes at the end of a season,” a pilot said. “We’re fighting a legit war here, and it’s active.”

Overall, Operation Inherent Resolve (the U.S.-led combined joint task force in Iraq and Syria) is killing about 1,000 ISIS fighters a month. The death toll roughly matches the number of new recruits ISIS is able to field each month, effectively capping its manpower strength at about 30,000 to 40,000 fighters.

“This is a war, just based on the magnitude of the people we’re killing,” said Col. Michael Koscheski, commander of the 332nd Air Expeditionary Wing (the iconic “Red Tails” from World War II in which the Tuskegee Airmen flew), in an interview from an undisclosed deployed location.

“We’re killing a lot of them—I mean a lot,” Koscheski added. “The body count is a factor. It’s not the only factor, but it’s a factor. It will be interesting to see if Daesh can maintain its current attrition rate.”

Remembering 9/11 During America’s War on ISIS

Although Operation Inherent Resolve comprises more than 60 countries, only 12 are actively conducting airstrikes. According to Department of Defense data released Sept. 8, the coalition has conducted 6,700 airstrikes and flown an estimated 53,278 total sorties.

U.S. and coalition commanders explain their overall objective in Operation Inherent Resolve as twofold—both to destroy ISIS and to train and equip the Iraqi Security Forces, Kurdish Peshmerga, and Free Syrian Army to take back territory under ISIS control and to eventually shoulder the fight on their own.

Success is the implosion of Daesh from within. Over time it will be like a cancer; it will eat itself from the inside out.
— Col. Michael Koscheski, commander, 332nd Air Expeditionary Wing

“Success is the implosion of Daesh from within,” Koscheski said. “Over time it will be like a cancer; it will eat itself from the inside out.”

“But the Iraqis have to do this for themselves,” he said. “That’s the end goal. Without Iraqi ground troops to take back ground, the effectiveness of air power is limited.”

“We are here to defeat Daesh,” Air Force Col. Clarence Lukes Jr., commander of the 386th Air Expeditionary Wing, said in an interview. “But this has to have an Iraqi solution.”

Koscheski estimated that U.S. involvement in the war on ISIS will be a long-term endeavor, lasting for perhaps another five to seven years, he said.

“Americans want a clean end and a ticker tape parade, and that’s not going to happen here,” Koscheski said. “But it’s by no means hopeless.”

After nearly a year, the war against ISIS is at a stalemate. ISIS is no longer able to mass personnel or equipment to take new ground—air power alone has stopped its advance. But the ability of air power to win the war against ISIS has hit its limit. It will now take an effective ground force to retake territory conquered by ISIS and to achieve ultimate victory.

“There’s no clear winner at this point,” Lukes said. “There are still areas that are highly contested.”

“It’s going to take a while to take back territory because we don’t have boots on the ground to fight,” a senior coalition Air Force officer said, speaking on condition of anonymity due to security concerns and restrictions on media communication.

“It’s up to the Iraqis to take the initiative,” he added.

One of the key victories for coalition air power was the battle for Kobani, Syria, in which U.S. warplanes—principally B-1 supersonic bombers—pummeled ISIS fighters with heavy bombing. Unlike other urban centers in the Iraq-Syria battle space, civilians had evacuated Kobani, allowing U.S. warplanes more latitude to inflict heavy damage. The resulting airstrikes were catastrophic for ISIS fighters.

“Air power saved Kobani,” Koscheski said. “But we leveled it to save it. It was annihilated.”

“We killed thousands,” he added. “It was like human fodder.”

ISIS no longer has freedom of movement and has changed its tactics to adapt to the threat of U.S. and coalition air power. Gone are the days of brazen ISIS fighters clad in all black, parading triumphantly through captured villages in Toyota Hiluxes while trailing their signature black flags.

“If they’re doing that now, they’re dying,” Koscheski said. “The Daesh that you see in a lot of news clips doesn’t exist any more. Now they’re cowering and running between buildings.”

There is a humble lethality in the way the A-10 pilots talk about killing. They chuckle and eat ice cream for dessert as they tell stories about panic-stricken ISIS fighters accidentally running toward the distinctive sound of the A-10’s 30-mm Gatling cannons, or of an ISIS fighter who did a swan dive to his death off a cliff while trying to escape an A-10 attack.

“When I saw that, I just radioed: ‘He’s dead,'” one pilot, an Air Force major, dryly explained.

“They say they love death more than we love life,” another pilot, a captain, said. “But they always flee when we attack. I’ve never seen one not try to get away.”

The pilots’ eyes seem to focus on yours a half-beat longer than normal as they matter-of-factly describe strafing an enemy checkpoint, or killing ISIS fighters one by one as they attempt to escape doomed tanks and armored personnel carriers. Sometimes a pilot will lean back in his chair with eyes open wide, slowly shaking his head as he describes the carnage he has inflicted on the enemy. But there is no remorse, not even the hint of it.

“I’ve never had a bad dream or lost one ounce of sleep,” one pilot, an Air Force major, said. “We face an evil enemy, and we fight them honorably.”

It’s personal, but in a professional way. We have a job to do. But ISIS is pure evil, and we have no problem killing them.
— U.S.-led coalition pilot

The pilots say they enjoy their work, but it is the pleasure of executing a mission with precision and no mistakes. “It’s personal, but in a professional way,” one pilot explained. “We have a job to do. But ISIS is pure evil, and we have no problem killing them.”

And there is no questioning the justice of the war. U.S. pilots and their coalition partners say they are fighting in Iraq and Syria to prevent the “cancer” of ISIS from spreading.

“We see the videos,” an A-10 pilot said, speaking about the videos released online of ISIS militants beheading and immolating prisoners. “And that takes away any hesitation to kill. The only thing that gives me pause is what happens if I have to eject.”

The fate of a downed pilot over ISIS territory is one of the coalition’s greatest concerns. U.S. pilots report the current surface-to-air threat over Iraq and Syria is markedly higher than over Afghanistan. A-10 pilots say AAA (anti-aircraft) fire is prevalent, with tracers sometimes coming close enough to be visible in daytime. And according to Koscheski, there is also a theater-wide threat of MANPADS (Man-Portable Air-Defense Systems, or shoulder-fired surface-to-air missiles). No A-10s have yet suffered battle damage, although an Air Force F-16 came back from one mission with bullet holes, Koscheski said.

“There’s a real threat here, unlike in Afghanistan,” an A-10 pilot said. “I’ve had a few close calls. Do we respect the threat? Yes. Are we afraid of it? No.”

At an undisclosed base in the region, U.S. Marine Corps MV-22 tilt rotor aircraft are deployed to support a Marine TRAP (Tactical Recovery of Aircraft and Personnel) unit. The MV-22 crews are on alert 24 hours a day to recover downed pilots and to respond to other crises, including an attack on the U.S. Embassy in Baghdad.

“Those links between Benghazi are here,” said Marine 1st Lt. Matt Gregory. “But the likelihood of an event like that is very small.”

So far the Marine TRAP unit has responded to retrieve downed remotely piloted aircraft (the military’s term for drones) but has not yet had to recover a pilot. “That’s our Super Bowl,” said Marine Capt. Steven Ritter, an MV-22 pilot.

The fate of 26-year-old Jordanian F-16 pilot Lt. Muath al-Kaseasbeh, whom ISIS burned alive and released a video of his execution online, has highlighted the life-or-death stakes for recovering downed U.S. and coalition airmen before they fall into enemy hands.

“It was a game-changer,” Koscheski said, speaking about the immolation video. “In Vietnam and in past wars, captured pilots could expect to be hurt or even tortured. But they weren’t burned alive in a cage. There’s no plan B here. You either save the guy or he goes down swinging.”

Nolan Peterson, a former special operations pilot and a combat veteran of Iraq and Afghanistan, is The Daily Signal’s foreign correspondent based in Ukraine. Copyright The Daily Signal. This article was previously published on DailySignal.com