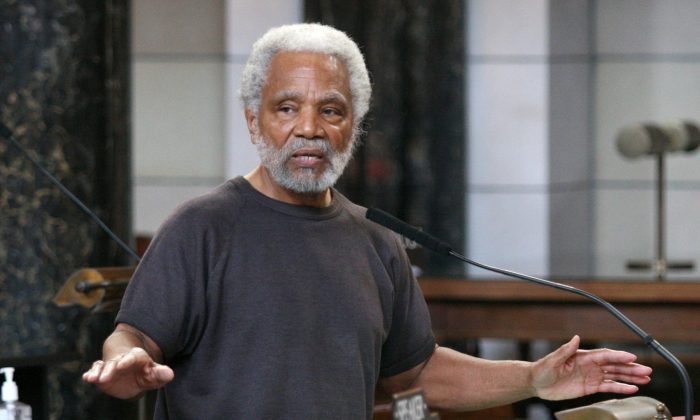 Senator Ernie Chambers called the American flag "a rag" and likened it to the swastika on the floor of the legislature. (Nebraska Legislature)
US News

A Nebraska state lawmaker has come under fire for calling the American flag “a rag” and comparing it to a Nazi Swastika.

Senator Ernie Chambers made the comments on the floor of the legislature on Feb. 19, when responding to a state bill (pdf) that would update school civics requirements to ensure that students “become competent, responsible, patriotic, and civil citizens.”

“I don’t come here for this rag every day, and it’s a rag. That’s all it is to me,” Chambers said when talking about the American flag.

“When you show a way to persuade Jews to sanctify and worship the swastika when you show me that I’ll come up here and stand while you all hypocritically pretend that rag is something that it definitely is not.”

Several state senators have reacted to Chambers’s remarks. Senator Julie Slama, who introduced the bill, said, “Sen. Chambers’ comments not only degrade a symbol of ultimate sacrifice for our nation, but they also minimize the horrors and millions of lives lost in the Holocaust,” reported Washington Examiner.

Similarly, Sen. Tom Brewer gave an emotional response on the floor of the unicameral to the comments on Feb. 21, reported KMTV. As someone who served in the military for more than 30 years, he shared what the flag means to veterans and their family.

Nebraska Sen. Tom Brewer, who spent more than thirty years serving in the military, became emotional on the floor of the unicameral today as he responded to a comment made by Sen. Ernie Chambers, who called the U.S. flag a “rag”.https://t.co/SNa9EcSrbs

This is not the first time Chambers has attracted attention for his controversial comments. In 2007, the senator filed a lawsuit against God asking for a “permanent injunction ordering Defendant to cease certain harmful activities and the making of terroristic threats,” reported Fox News.

He also received backlash in 2015 when he called the police “my ISIS,” in reference to the Islamic terrorist group. He said, “nobody from ISIS ever terrorized us as a people as the police do us daily. And they get away with it.”