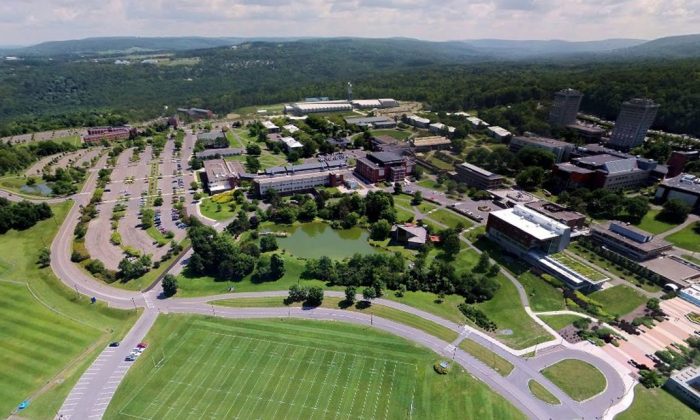 Hundreds of students at Ithaca College held a protest on Nov. 11 that called for the college president Tom Rochon to resign from his post–two days after the resignation of the University of Missouri System president Tim Wolfe.

President Tom Rochon remains on stage as chants of “Tom Rochon, no confidence” fade out. pic.twitter.com/eDPHpNxppG

The protest, which started 1:30 p.m., was initiated to respond to a series of ongoing concerns of alleged racial injustice.

“We stand here in solidarity,” a woman with POC at IC (People of Color at Ithaca College) told students at the demonstration, according to the Ithaca Journal.

Another student said that “I’ve never had a black professor.”

“I do feel the racial tensions in this college. I’ve been pretty quiet so far, but it’s time for (the president) to do something,” the student added.

“There hasn’t been this kind of student activism (since the 1960s) and I think it’s just really incredible that so many people came out in support of POC at IC and against the president, Tom Rochon, whose policies have just been completely absurd,” senior Chris Walsh told USA TODAY.

.@IthacaCollege protesters got in on the #BlackOnCampus movement with a campus walk-out: https://t.co/CCKppvBogP pic.twitter.com/EG3XUQuijd

College spokesman David Maley said Rochon attended a portion of the protest. He said he would “speak if asked by the students.”

Rochon on Wednesday announced the school would hire a “chief diversity officer” to “improve our campus’s racial climate and build a culture that lives up to its values of civility, mutual respect, and justice.”

“It has become clear to me that, although we have taken some steps in the right direction, I will need the counsel and full-time focus of a strong and experienced leader with deep knowledge in this area in order to make progress with appropriate speed, inclusivity, accountability, and transparency. Other institutions have been able to engender lasting change by establishing this level of accountability, and I am confident that this is the right thing for Ithaca College as well,” Rochon said in the statement.

Last month, tensions flared when students said a prominent alumni made a racially insensitive remark about other students.