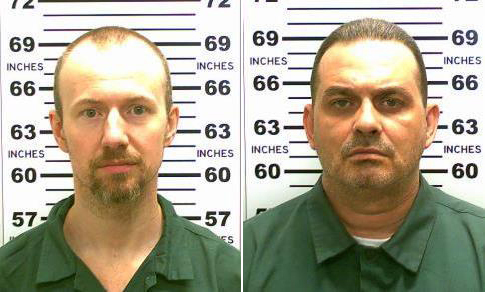 BELLMONT, N.Y.— Items recovered from a remote hunting cabin have been sent to labs for DNA testing to determine if they are linked to a pair of convicted killers who escaped from a nearby prison more than two weeks ago, authorities said as searchers converged on a wooded area in the hamlet in far northern New York.

State Police Maj. Charles Guess on Monday characterized the latest search effort — one of many over the past 17 days — as a confirmed lead. He said at a news conference that authorities had “specific items” from the Adirondack cabin about 20 miles west of the prison where inmates David Sweat and Richard Matt escaped on June 6.

Guess would not elaborate on the items, but said they were sent to labs for DNA and other testing.

Acting Franklin County District Attorney Glenn MacNeill told WPTZ-TV on Sunday that a hunter had reported seeing a person fleeing from a camp in the area.

Terry Bellinger, owner of nearby Belly’s Mountain View Inn, said the hunter told him he saw a man run into the woods as he approached the camp Saturday on an ATV. When the hunter went into the cabin, he noticed two things out of place: a jug of water and an open jar of peanut butter on a table. Bellinger said the hunter went to his restaurant, where he talked to police for several hours.

“He was visibly shaken. He wanted a glass of water,” Bellinger said.

Guess urged residents and seasonal camp owners to call police if they notice anything out of place or capture footage on trail cameras of any suspicious activity.

“There are a number of factors that make this a complex search: the weather, the terrain, the environment and frankly the vast scope of the north country of the Adirondacks,” he said.

Sweat, 35, was serving a life sentence without parole at the Clinton County Correctional Facility for killing a sheriff’s deputy. Matt, 48, was doing 25 years to life for the 1997 kidnapping, torture and hacksaw dismemberment of his former boss.

Prison worker Joyce Mitchell remained in custody on charges she helped the two men escape by providing them hacksaw blades, chisels and other tools. She has pleaded not guilty.

Authorities say she had talked to the inmates about killing her husband, Lyle, who also works at the prison. Andrew Wylie, Clinton County district attorney, said Joyce Mitchell told authorities that she and Matt discussed having Matt and Sweat go to her house after they escaped to kill Lyle Mitchell.

Monday’s search area was about 20 miles east of Mitchell’s home in Dickinson Center.

Lyle Mitchell told NBC’s “Today” show in an interview aired Tuesday that there was nothing unusual about his wife’s demeanor when they heard about the escape later on June 6, after she was treated for a panic attack earlier that day. It wasn’t until police called to talk to his wife that he first learned she may have been involved in the escape, Lyle Mitchell said.

“Mr. Mitchell, your wife is more involved than she’s letting on,” he said an investigator told him.

Lyle Mitchell said his wife told him Sweat and Matt offered to give her pills to knock her husband out so she could pick them up after they made it out of the prison, but she refused because she said she still loved her husband.

Busloads of officers, search dogs and helicopters began arriving in the Adirondack hamlet of Bellmont late Sunday as a parallel search more than 350 miles away from the prison wrapped up with no sign of the inmates.

The search had been focused over the weekend on two towns in Allegany County along the Pennsylvania state border. An unconfirmed but credible report came in that two men resembling the prisoners had been spotted near a railroad line that runs along a county road.

New York State Police said Monday morning that the search in the towns of Amity and Friendship in western New York had concluded.

Since Sweat and Matt escaped from the prison in Dannemora, more than 800 law enforcement officers have gone door-to-door checking houses, wooded areas, campgrounds and summer homes.

Officials said a corrections officer has been placed on administrative leave as part of the investigation into the men’s escape.

“I can 100 percent confirm that he did not know they were planning on breaking out of the prison,” Brockway said.

Palmer has not been charged.