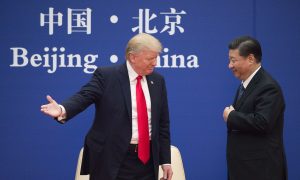 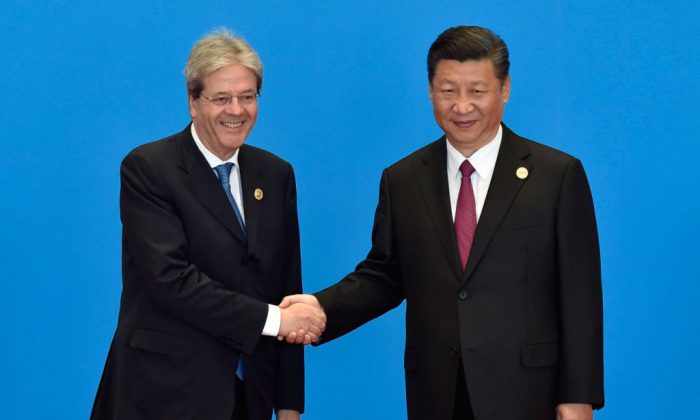 The Italian government appears to be divided over whether to participate in China’s “One Belt, One Road” initiative, as concerns are being raised within Italy and by its ally, the United States.

Italian’s intention to join China’s project for growing geopolitical clout was first announced by Michele Geraci, undersecretary of the Italian economic development ministry, in an interview with the Financial Times on March 6. Geraci said that negotiations were underway and Italy could formally sign a memorandum of understanding (MoU) with China to enter the initiative when the country’s leader Xi Jinping visits Italy sometime in March.

Geraci’s comment was affirmed two days later when Italian Prime Minister Giuseppe Conte said he may sign an accord on One Belt, One Road (OBOR, also known as Belt and Road) when Xi visits, according to Reuters. Xi is scheduled to travel to Italy for three days beginning on March 22.

Italy’s geographical location is critical to OBOR, also known as the Belt and Road initiative. First announced by Beijing in 2013, it seeks to build Beijing-centered land and maritime trade networks by financing infrastructure projects throughout Southeast Asia, Africa, Europe, and Latin America.

Italian transportation networks, including railways and seaports, are considered by Beijing to be important for its maritime economic corridor under OBOR, linking southern Europe with ports in Southeast Asia and eastern Africa—eventually reaching China.

However, Beijing’s initiative has been criticized for burdening developing countries with massive loans that they cannot pay off. This “debt trap” has already occurred in Sri Lanka and the Maldives due to OBOR projects.

Immediately, U.S. officials voiced their concerns. On March 9, the U.S. National Security Council (NSC), writing on its Twitter page, stated: “Italy is a major global economy and a great investment destination. Endorsing BRI [Belt and Road initiative] lends legitimacy to China’s predatory approach to investment and will bring no benefits to the Italian people.”

If signed, Italy would be the first G7 country to join OBOR—and only the second major western European state after Portugal. Group of Seven (G7) are the 7 most advanced economies in the world: Canada, France, Germany, Italy, Japan, the UK, and the United States.

There were also dissenting voices within the Italian government who opposed China’s OBOR. Italian Under-Secretary for Foreign Affairs Gugliemo Picchi responded to the NSC tweet through his Twitter account: “I share the concerns, not to please our allies but because a deeper scrutiny is necessary.”

Outside of the Italian government, there were also concerns. Luigi Merlo, president of a transportation union Federlogistica Conftrasporto, stated “The risk I see is that people are not discerning between the need to increase our trade versus the Chinese growing hegemonic position,” he said in an interview with Italian daily newspaper Il Giornale.

Merlo added that he was worried ports, highways, and infrastructure projects would soon become under Chinese control, “leaving in the end the levers of command to another government.”

European media platform EURACTIV, citing an unnamed source, said that Italy’s ministry of foreign affairs was surprised by the decision of Italy’s economic development ministry to go public with the intended MoU, despite the fact that the foreign ministry was in charge of negotiating any international cooperation agreements.

EURACTIV, a media platform headquartered in London, published an article on March 8, claiming to have obtained a leaked copy of the MoU.

According to the leaked memo, China and Italy would “promote synergies and strengthen communication and coordination,” with the two countries also enhancing “policy dialogue” on “technical and regulatory standards.”

China would also provide new investment at the Italian port of Trieste. According to EURACTIV, Trieste is one of the biggest seaports in the Mediterranean Sea, and contains a railway connecting to cities in central and northern Europe.

Under the leaked memo, the two countries would also increase collaboration between unnamed Chinese companies and Italy’s state-controlled aerospace, defense, and security company Leonardo. The firm manufactures fighter jets, helicopters, and ammunition, and often partners with the Italian air force.

EURACTIV reported that the planned business partnership leaked in the MoU were all initiated by the Chinese side.

Meanwhile, Italian media have scrutinized the economic development ministry undersecretary for his close ties with China.

According to Geraci’s academic profile listed on UNNC’s website, he is “currently on leave” because of his position as the undersecretary in Italy.

Geraci has also given lectures at multiple colleges throughout China.

Aside from being active in Chinese academic circles, Geraci also appeared as a commentator on China’s state-run broadcaster CCTV, offering his analysis on business-related topics, and was a columnist for the state-run China Daily and Caixin, a business magazine, according to the UNNC website.

Il Foglio’s editorial also pointed out several incidents involving China in which Geraci played a prominent role. In November 2018, as the European Union was finalizing a framework for screening foreign investment deals with national security risks, Geraci publicly argued against a provision that required EU countries to share foreign investment information with the European Commission should the governing body request it, according to Reuters.

The investment screening—proposed in the first place with Chinese investment in mind—was passed in February. Under the framework, national governments can still decide themselves whether to block foreign investment deals themselves, but the European Commission can request information and issue advisory opinions.

Then in February, amid global criticism of Chinese tech giant Huawei, Geraci said in an interview with Bloomberg that he did not think Huawei participating in the country’s 5G infrastructure would be an issue, and that the company was just one of the many telecoms manufacturers that Italy could choose from.

While it remains to be seen if Italy would actually sign the OBOR MoU, the business relationship between the two countries began in 2004, when a joint communique was signed announcing their strategic partnerships, following a trip by then-Chinese premier Wen Jiabao to Italy.

In June 2014, while the former Italian prime minister visited Beijing, Italy and China signed a three-year action plan (2014–2016) promising cooperation in fields such as agriculture, aviation, and medicine.

A new action plan was signed in May 2017 (2017–2020), whereby the two countries agreed to the importance of seeing interaction between China’s OBOR and Italy’s transportation system, especially Italian ports located on the Adriatic Sea and the Tyrrhenian Sea, such as Trieste and Venice.

Chinese investment in Italy has increased dramatically since 2014, according to a December 2017 report by the European think tank Network on China, a consortium of research institutes in different European countries.

As of 2016, more than 260 Chinese companies have invested in around 450 Italian businesses. Foreign direct investment from China increased dramatically from 26 million euros in 2010 to 1.1 billion euros (roughly $1.25 billion) in 2016.

In 2016, APM Terminals, a container terminal operating company headquartered in the Netherlands, sold a 40 percent stake and 9.9 percent stake to Chinese firms to operate two terminals at the Italian port of Vado: COSCO Shipping Ports, a subsidiary of the state-owned China Ocean Shipping (COSCO) and Qingdao Port International Development, a subsidiary of the state-owned Qingdao Port Group.