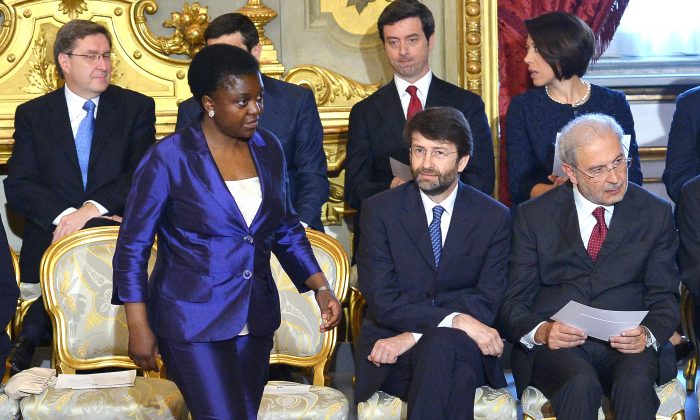 BARI, Italy—What would you do if someone called you an orangutan, insulted you, or threw bananas at you? Well, what Italian Minister for Integration Cécile Kyenge did, may surprise you.

Cécile Kyenge is Italy’s first black minister. While most Italians don’t have an issue with the color of her skin, some political opponents have acted aggressively toward her.

Most of the racist attacks are coming from the Lega Nord (Northern League) Party—a party with an anti-immigration stance that is trying to split Northern and Southern Italy. At a party meeting, Lega Nord politician Roberto Calderoli called Kyenge an orangutan. Italians in higher office condemned Calderoli’s remark and a spokesman for the U.N. Office of the High Commissioner for Human Rights, Rupert Colville, called it “absolutely unacceptable.” Calderoli later apologized.

During a event of the Democratic Party, someone threw bananas at her. She reacted by saying, “With people dying of hunger and having an economic crisis, wasting food is so sad.”

“Italy is not racist, but there is a minority that can shout louder,” Kyenge said. “What saddens me more are not the insults, but that this is the image of Italy that people see from abroad.”

In terms of creating a false image, the Italian political commentator Alessandro Lattarulo said, “We live in a world where people tend to constantly go over the line to be heard,” referring to the statements of some politicians. And even if they are not really racist, “psychological studies have shown that if you repeat something many times, you end up convincing yourself,” he said.

One of the harshest attacks against Kyenge has been a Facebook post by a Lega Nord member. Alongside an article about an African man who tried to rape two girls, he posted a photo of Kyenge and wrote: “How come nobody has raped her??????? She would then understand what the victims of this brutal crime have experienced. Shame!”

When asked for comment, Kyenge replied politely, “For many years I have fought to keep my ideology … to follow a nonviolence position and tone.”

“So I’m keeping that tone once again, and … I will not reply, because everyone has to feel offended by this.”

The author of the Facebook post was expelled from the Lega Nord. Soon solidarity flowed toward Kyenge from different political parties and the Italian public.

According to Lattarulo, racism can easily emerge during an economic crisis. Even if countries in the Mediterranean area, like Italy, have plenty of contact with foreigners, many politicians are focussing on native Italians rather than on immigrants.

“They are stealing our work” is a phrase about immigrants heard often in Italy. Right-wing forces tend to put the interest of native Italians ahead of immigrants.

One of the major reforms Kyenge is trying to achieve is Ius Soli, the right of every person born in Italy to become an Italian citizen. Most European states have Ius Sanguinis where the right of citizenship goes only to children of citizens.

While it is mostly the right-wing and Lega Nord that have criticized Kyenge’s political ideas, even Italy’s influential, left-leaning commentator, Giovanni Sartori, has strongly rejected her ideas.

Even if “the fact of having Kyenge as a minister symbolizes a very strong shift” for Italy, “I don’t think she is one of the more effective ministers we have,” Lattarulo said.