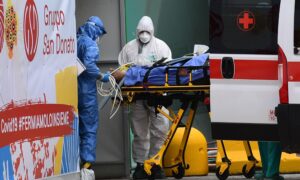 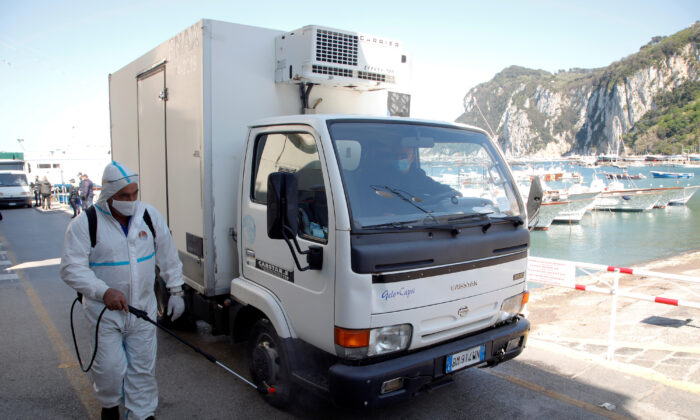 A worker wearing protective clothing disinfects a vehicle after disembarking from a ferry in Capri, Italy, on April 24, 2020. (Ciro De Luca/Reuters)
WORLD

The first COVID-19 infections in Italy date back to at least January, according to a scientific study presented on Friday, significantly pushing back the date the virus started ravaging the country and shedding new light on the origins of the outbreak in the region.

Italy has suffered more deaths due to the CCP (Chinese Communist Party) virus, the novel coronavirus that causes COVID-19, than anywhere else in Europe.

Deaths from the epidemic in Italy climbed by 420 on Friday, the smallest daily tally since March 19 and down from 464 the day before, the Civil Protection Agency said. The total number of fatalities since the outbreak came to light in February now stands at 25,969, the agency said.

Italy began testing people after diagnosing its first local patient on Feb. 21 in Codogno, a small town in the Lombardy region. Cases and deaths immediately surged, with scientists soon suspecting that the virus had lingered, unnoticed, for weeks.

Stefano Merler, of the Bruno Kessler Foundation, told a news conference with Italy’s top health authorities that his institute looked at the first known cases and drew evident conclusions from the pace of contagion.

“We realized that there were a lot of infected people in Lombardy well before Feb. 20, which means the epidemic had started much earlier,” he said.

“In January for sure, but maybe even before. We’ll never know,” he said, adding that he believed the immediate surge in cases suggested the virus was probably brought to Italy by a group of people rather than a single individual.

Italy was the first major western country to face the viral disease, which originated in Wuhan, China late last year and spread aggressively around the world. While much remains unknown about the CCP virus, it is highly contagious.

A Johns Hopkins tally on Friday registered 2,783,512 confirmed infections and 195,313 deaths worldwide. The true infection and death numbers are likely higher due to asymptomatic and unreported cases, as well as doubts about the accuracy of official figures reported by the Chinese regime.

In Italy, 150 doctors have died on the frontlines of the outbreak, according to an Italian doctors’ association.

On April 24, the editorial board of the Italian Association of Doctors (FNOMCeO) updated its running tally of doctors who died amid response efforts to the pandemic.

“Unfortunately, the sad list of doctors who have fallen during the COVID-19 epidemic is growing,” FNOMCeO’s board wrote in a note accompanying the tally.

The association did not specify how the deaths of the 150 doctors could be attributed directly to COVID-19, noting that “many doctors die suddenly, even if the cause of death is not directly attributable to the virus, because there’s no buffer.”

According to an April 24 count (pdf) by the Italian Higher Health Institute (ISS), a total of 19,942 healthcare workers in Italy have contracted the virus.